/sites/all/themes/penton_subtheme_nrn/images/logos/footer.png
Recent
Recent
Starbucks promotes regional vice president Dennis Brockman to global chief inclusion and diversity officer
Mar 05, 2021
Chick-fil-A’s annual $5 million True Inspiration Award is now exclusively for Black-led organizations or those that serve communities of color
Mar 04, 2021
Nearly 30% of restaurant operators say business won't return to normal for at least a year
Mar 04, 2021
Chipotle will be tying executive compensation to diversity and sustainability goals
Mar 04, 2021
Stimulus checks could give restaurants a boost for up to 7 weeks, research shows
Mar 04, 2021
Featured
Chain restaurants take to oat milk as a coffee enhancer as well as a dessert base
Mar 05, 2021
Beyond Meat announces partnerships with McDonald’s and Yum Brands
Feb 25, 2021
McDonald’s commits to leadership diversity; 35% of leadership roles will be held by people from underrepresented groups by 2025
Feb 18, 2021
Just Salad makes reusable bowls available for pickup orders, with delivery in the works
Feb 22, 2021 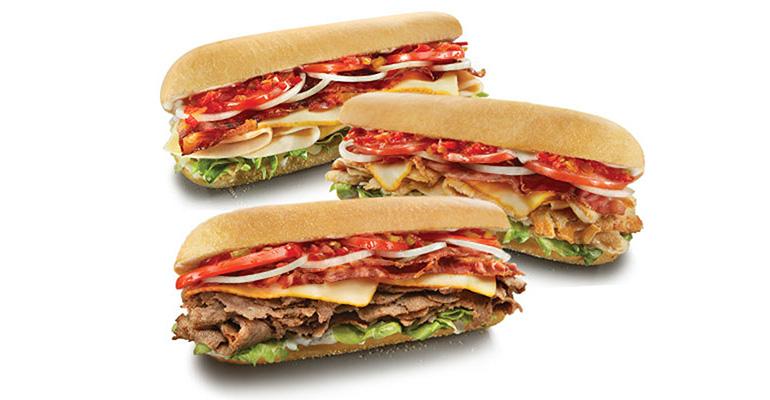 Consumption continues to grow as operators roll out new options

While Jan. 20 is officially National Cheese Lovers Day, neither restaurant operators nor their patrons need an excuse to celebrate the popular dairy product. The U.S. Department of Agriculture’s Economic Research Services  reports that per capita consumption of cheese jumped 19% over the past decade, a remarkable increase given the substantial commodity tonnage already accounted for by pizzas and burgers. Smart chefs have been looking to expand usage of the product by taking advantage of its versatility all year round.

Much of the product’s appeal lies in its texture, and chains have taken maximum advantage of its ooey-gooey meltiness. Fazoli’s kicked off 2020 with a trio of mac & cheese specials that included Lobster Mac & Cheese with white cheddar sauce and Buffalo Chicken Mac & Cheese with Asiago sauce. Spring saw Chipotle Mexican Grill roll out a newly reformulated queso blanco made with two cheeses — Cheddar and aged Monterey Jack — and three types of peppers — serrano, poblano and, appropriately, chipotle. Fuzzy’s Taco Shop brightened up the summer with its Queso Flight promotion featuring small portions of any three of its dips such as Fuzzy’s Taco Shop’s Famous Queso and Pork Green Chili Queso.

Autumn saw the launch of Panera Bread’s Broccoli Cheddar Mac & Cheese. A mashup of a popular soup with equally popular mac & cheese, the intro was memorably supported by singer Michael Bolton, who crooned “can’t keep your mouth on nothing else,” while accompanied by the chain’s corporate chef playing the guitar. The year ended in a slightly lower key with the December debut of Papa John’s Epic Stuffed Crust Pizza that gets its name and oozy allure from baked-in mozzarella.

Cheese is readily compatible with a range of prep techniques and treatments. Carl’s Jr.’s and Hardee’s limited-time Big Fried Cheese Angus Thickburger used a cheddar-and-mozzarella blend that was coated in seasoned breading and fried before being put atop a one-third pound patty. The eponymous Curio Katsu Cheddar Sandwich from Curio restaurant in San Francisco replaces the typical chicken with panko-breaded fried Cheddar that rests on a house-made bun and is finished with miso mayonnaise and kimchi.

Grilled cheese and tomato soup is a classic combo, of course, and the Cincinnati-based Tom and Chee chain puts the pairing at the heart of its menu with options like the Bacon Mac & Chee Sandwich and the Creamy Tomato Soup made with fresh garlic and basil. For their cheese-loving patrons who can’t get enough of a good thing, there’s the signature Famous Grilled Chee Donut, a grilled glazed doughnut made with mild cheddar, for dessert.

Other dishes are also on the receiving end of cheesy reinvention, like the Ramen Grilled Cheese from two-unit, The Sandwich Society, based in Santa Ana, Calif. Among other ingredients, the menu item incorporates ramen noodles, kimchi, jalapeño peppers and spicy red sauce. The cheese is a mixture of shredded cheddar and provolone.

Pimento cheese — a mixture of cheese, mayonnaise and pimientos — is iconic below the Mason-Dixon line, where it is often referred to as the pâté of the South. Another Southern icon, Atlanta-based Chick-fil-A, took advantage of its zesty flavor with the promotional Honey Pepper Pimento Chicken Sandwich. Tested in September in select markets, the chicken breast was drizzled with honey and topped with pimento cheese, and the typical pickle chips were replaced by mild pickled jalapeños.

Up north, Wisconsin, which is the country’s largest cheese producer, fabricated more than three billion pounds of cheese in 2019. Cousins Subs is based in the state and stepped out in September with limited-time Muenster subs that boasted buttery Wisconsin Muenster cheese and got a boost from hot-pepper relish.  Also headquartered in the state, Toppers Pizza recently introduced the new Wisconsin Curds ‘N Bacon Pizza, in which Wisconsin mozzarella and beer-battered cheese curds are topped with bacon and green onions and drizzled with ranch sauce.

For true aficionados, however, the only thing better than cheese is more cheese, and restaurateurs provide them with lots of opportunities to indulge their obsession. Au Bon Pain weighs in with a Country Grilled Cheese Sandwich, which is made with a four-cheese blend, bacon and tomatoes on country white bread. Sarpino’s Pizzeria, headquartered in Singapore and expanding throughout the United States, ups the ante to five with the Cheese Bonanza Pizza that loads up the traditional pan pizza with Parmesan, cheddar, ricotta, feta and the signature gourmet cheese blend. But for sheer cheesy overload, nothing beats Domino’s Wisconsin 6 Cheese Pizza that includes feta, provolone, cheddar, Parmesan, Asiago and mozzarella.