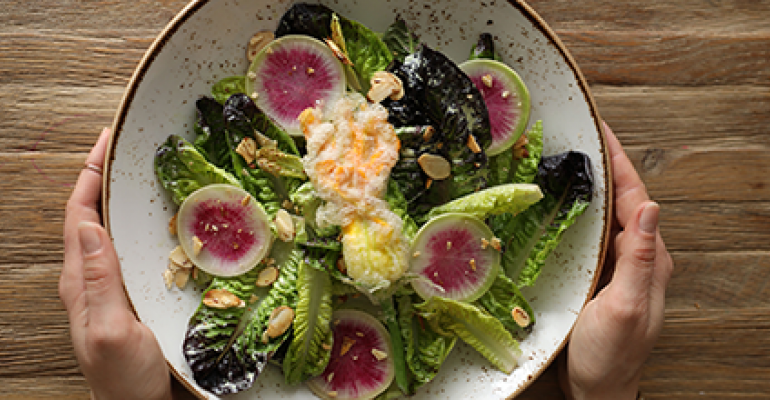 The California classic makes a comeback

The state of California has done much to both define and refine the concept of the salad, whether on the side or at the center of the plate.

From a production angle, the state produces about 70% of all salad greens grown in the United States, according to the U.S. Department of Agriculture. But equally important, though not subject to government reporting, is the state’s storied history in salad dressing.

Ranch dressing, which the Association for Dressings and Sauces has named Americans’ hands-down favorite, was invented in the 1950s at Hidden Valley Ranch near Santa Barbara. It was, however, substantially predated by green goddess dressing, which was conceived at the Palace Hotel in San Francisco in the early 1920s; and while it has faded in and out of popularity in the intervening decades, the last few years have seen green goddess steadily ascending.

Part of its allure may be subliminal: Applying the term “green” to anything establishes its bona fides with diners and gives them permission to indulge. Its lovely, pale green color provides visual appeal, and its versatility scores points in the kitchen. Building on a base of mayonnaise that gets its pleasing hue from the addition of herbs like chives, parsley and tarragon, chefs have innovated with other applications and ingredients.

Green dressings. Green goddess shines on salads and meshes well with whatever it tops, such as the clever Titanic Wedge That Sunk the Kitchen at Fine & Dandy in Jackson, Miss., which boasts regional touches like roasted pecans, pickled summer peppers and benne seeds. By contrast, the Brussels “Caesar” at Watershed in Atlanta combines thinly shaved sprouts with guanciale, pistachios, shallots and white anchovies; the latter echoes the San Francisco original, which also featured anchovies.

Both locations of Butcher & Bee have gone for green goddess. Last summer the Charleston, S.C., location put it atop local beets with avocado, feta cheese and walnut gremolata, while the Nashville restaurant featured it on the Autumn Green Salad with radishes, apples, pistachios and Parmesan.

Emerging fast-casual salad chains have embraced it, too, as with the Bently, a protein-packed signature at Saladworks in which ham, turkey, egg and provolone cheese reside on romaine crowned with green goddess, or the Spring Burrata & Green Goddess with asparagus, snap peas and za’atar breadcrumbs at Sweetgreen. 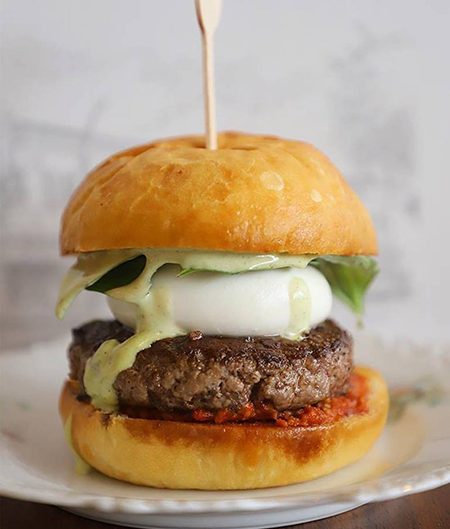 Green sauces. Green goddess makes its mark all around the menu. The Fine & Dainty Burger (left), a dinner option at Fine & Dandy, consists of burrata and tomato pesto atop the patty, while Renzo in Charleston, S.C., offers a Troutwich with fried egg and avocado for brunch. Both benefit from the addition of green goddess.

At cutting-edge Girl & the Goat in Chicago, the crispy pork shank special was finished with stone-fruit kimchi and green goddess, then served with a side of naan. The opening menu at Geist in Nashville drizzled it atop pan-fried okra with shishito peppers and johnny cakes.

Green dips. The dressing’s herbal nature makes it a natural accompaniment with vegetables, like seasonal crudités with grilled sourdough at Mordecai in Chicago or the Roasted Seasonal Vegetable Board at True Food Kitchen. More unexpectedly, the bar bites menu at Decca in Louisville, Ky., offers tasty shoestring fries with a little green goddess on the side.

One of the reasons for green goddess’s recent rediscovery is likely the ease with which chefs can switch out compatible ingredients to make it their own. A great example is Denver-based Snooze an AM Eatery, where the Everything Bacon Sensation saw a brioche bun with everything bagel spices and green goddess cream cheese topped with egg, bacon and arugula bathed in citrus vinaigrette. At Samesa in Brooklyn, N.Y., the Mediterranean menu is accented by green goddess made with labneh, a fresh cheese made from strained yogurt that is a staple in Middle Eastern kitchens. And the green goddess dip on the seasonal vegetable board at True Food Kitchen included the addition of avocado.

Chains in all segments are giving it a green light, too. Green Goddess Cobb with Chicken is a staple on the menu at Panera Bread, and Subway recently announced the test of a Green Goddess Tuna Melt in 3,000 stores. In the casual-dining arena, Lazy Dog Restaurant & Bar’s house-made version provides a nice counterpoint to the candied almonds, watermelon radish and crispy squash blossom stuffed with goat cheese in its Green Goddess Salad (pictured at the top).

April 22, 2019: An earlier version of this story misstated the name of Lazy Dog Restaurant & Bar.