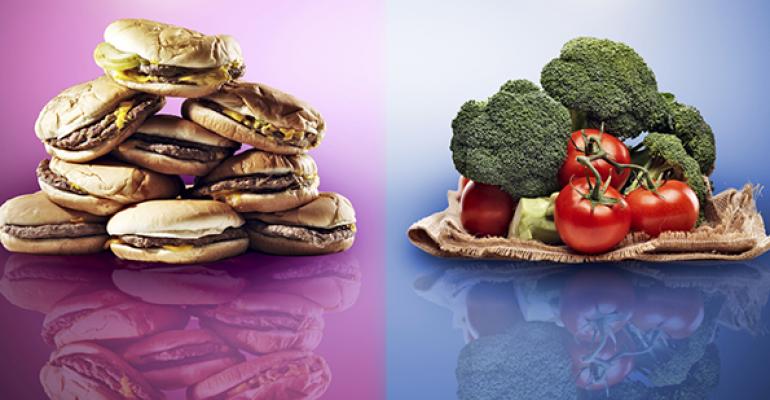 In this special report, What America Eats, NRN examines what diners&rsquo; changing relationship with food means for foodservice supply, menu, marketing and operations, and what restaurants can do about it.

When consumers are looking to indulge, a bit of an indulgence can go a long way.

“They really are in the mindset that moderation and occasional indulgences are a good thing as long as it fits their personal approach to health and wellness — so they’re aspiring to an ideal lifestyle that involves them eating healthfully most of the time, indulging on occasion and being overall happy and healthy,” said Kelly Weikel, director of consumer insights for Technomic Inc.

And restaurants are ready for the indulgent occasion. For breakfast, IHOP offers a 1,300-calorie Chorizo Fiesta Omelette with pancakes and syrup for an added 1,990 calories. For lunch, Red Lobster has a potential 2,710-calorie “Create Your Own Combination.” And for dinner, The Cheesecake Factory has a 2,370-calorie Louisiana Chicken Pasta. And in the middle of the night, Steak ‘n Shake has a 1,570-calorie 7x7 Steakburger ‘n Fries from midnight to 6 a.m.

Indulgent vs. healthful at The Cheesecake Factory

Restaurant menus reflect the two minds of the consumer. Cheesecake Factory’s pasta dish for several years has been cited by the Center for Science in the Public Interest for its extreme qualities, but the chain also for several years has offered its Skinnylicious menu with more than 50 lower-calorie items.

“Eating away from home is always something where consumers want to treat themselves,” said Weikel. “And on a special occasion, they are indulging, whether it’s a weekend or a birthday or those type of things.”

“There’s a lot of limited-time offers out there that are of an indulgent nature,” Riggs said, citing recent NPD Checkout Tracking studies on the Carl’s Jr./Hardee’s Thickburger El Diablo, a 1,170-calorie beast that debuted in March as a limited-time offer.

“With these LTO items, operators want to increase buzz and awareness,” Riggs said. “I don’t know that operators expect to get a lot of repeat business on them.” She said the NPD tracking found that 92 percent of the customers who ordered the El Diablo only did so once.

“For a lot of these indulgent items, it’s ‘one and done.’” Riggs said. “It was essentially 8 percent repeat on the product.”

Technomic’s 2014 “Healthy Eating Consumer Trend Report” found a gap between consumers’ desire to eat healthfully and their actual eating behavior. “More than two-fifths of consumers overall (44 percent) and 51 percent of women say that, in the past week, they always or mostly considered ordering healthy options at foodservice establishments,” the report found, but only 35 percent of respondents and 42 percent of women indicated they actually had purchased a healthy option.

While consumers talk about an ideal healthy lifestyle when it comes to restaurants, Weikel said, a lot of people “end up being a lot closer to the unhealthful side due to a host of factors” such as convenience, cost and, of course, temptation.

Customers today are driven by a need for convenience and a desire to consume food they feel good about.

“Consumers’ definition of what they are looking for in healthy eating is not about fewer calories, or lower fat or sodium. It really is about freshly prepared food with fresh ingredients with different flavor profiles,” said Riggs of the NPD Group.

“Take, for example, Chipotle and that burrito: It’s big. It’s got a lot of calories in it. It has high fat content in it. And it’s very popular.”

Riggs said recent NPD research has found that less indulgent items do seem to have more consumer loyalty than the showy high-calorie items.

NPD’s checkout tracking over two months on fast-casual main dish salads found 70 percent of customers tried them (as opposed to the 92 percent trial on the Carl’s Jr./Hardee’s Thickburger El Diablo). But then 30 percent of those customers ordered the main dish salads two times or more. And 10 percent order the salads three times or more.
Weikel of Technomic said her research has found that health vs. indulgent decisions are not black and white.

“It’s a spectrum,” Weikel said. “Consumers have a very balanced approach to health. When they think about that balance, part of it is indulging for what they would consider special or social occasions and then being a little bit more healthful at other ones. A lot of times, their interest in health gives way to temptations, but they try to get right back on track later.”

Technomic data have also shown the Millennials and older consumers are more likely than other generational groups to say they always or most times consider ordering and actually purchased healthy options in the past week, Weikel said.

And some of the healthy eating depended on the day of the week.

“On Monday, consumers say they tend to eat a little healthier,” said Weikel.