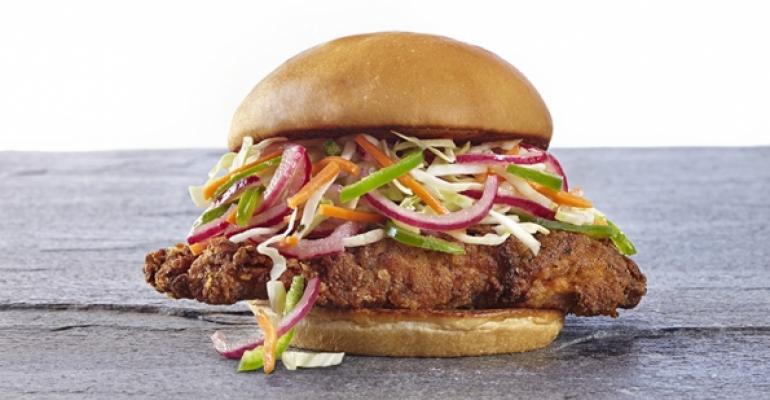 Erica Welton, a former food buyer for Costco Wholesale Corp., has opened what she says is the nation’s first ‘certified organic fast-food’ concept.

The Organic Coup opened in Pleasanton, Calif., on Nov. 10, offering a focused menu of fried chicken sandwiches, wraps and bowls. All ingredients are certified organic by California Certified Organic Farmers, or CCOF, a trade association and certifying agency accredited by the U.S. Department of Agriculture National Organic Program.

Welton, Organic Coup founder and CEO, said she spent 14 years as a buyer for Costco, watching the number of organic products grow in response to consumer demand.

But as a mother trying to ensure that her kids ate organic foods, Welton said she began to notice how few restaurant options there were for a completely organic experience.

“When they were babies, I made their baby food and tried to stay away from fast food. But as they got older, there just weren’t a lot of options,” she said. “We would go to restaurants serving organic greens or veggies, but then the salad dressing wasn’t organic.”

The chicken is fried in organic coconut oil, which Welton noted is more expensive. “But we chose this oil because if you’re going to fry, it really is the best, cleanest oil,” she said.

The signature chicken sandwich on a bun is priced at $8.99 and served with a topping of spicy shredded veggies. Customers can choose from mustard vinaigrette, spicy barbecue ranch, sesame ginger or ranch sauces.

There are no fries on the menu, Welton noted, and the only dessert option is organic popcorn drizzled with caramel and chocolate. Sodas are, of course, organic.

The first location is about 2,200 square feet, but Welton already plans to shrink the footprint to 800 square feet to bring the concept to malls, college campuses, airports and sports arenas.

Welton said the company plans to open 25 locations over the next 14 months without franchising, although she declined to specify how those units will be funded. “We have what we need to get going,” she said.

After working at Costco for 14 years, Welton said she has the supplier contacts to grow. From Costco, she learned much about focusing on delivering a great customer experience over margins, and making investments in people.

Workers at Organic Coup start at $14 per hour, Welton said, well above the $9 minimum wage in California.

With a growing number of consumers looking for the “certified organic” label, Welton said Organic Coup is tapping into a passion for clean food and concern about labeling for genetically modified organisms, or GMOs.

“People like to say organic must mean healthy, but organic means clean food,” she said. “The only way to eat non-GMO is to eat organic.”