/sites/all/themes/penton_subtheme_nrn/images/logos/footer.png
Recent
Recent
NRN editors discuss KFC’s new wraps, McDonald’s earnings and marketing, and TikTok
Feb 03, 2023
January was a strong month for restaurant hiring
Feb 03, 2023
Why data is crucial for both guests and employees, Freddy’s COO says
Feb 03, 2023
What the future of equipment looks like
Feb 03, 2023
How USHG committed to its journey on diversity
Feb 02, 2023
Featured
The emergence of mocktails
Jan 23, 2023
36 restaurant industry predictions for 2023
Dec 21, 2022
10 restaurant chains making waves in the breakfast space
Dec 14, 2022
How eco-friendly Seattle restaurant chain Just Poke is doubling in size in 2022
Nov 17, 2022
Flavor of the Week
brought to you by
Menu>Food Trends 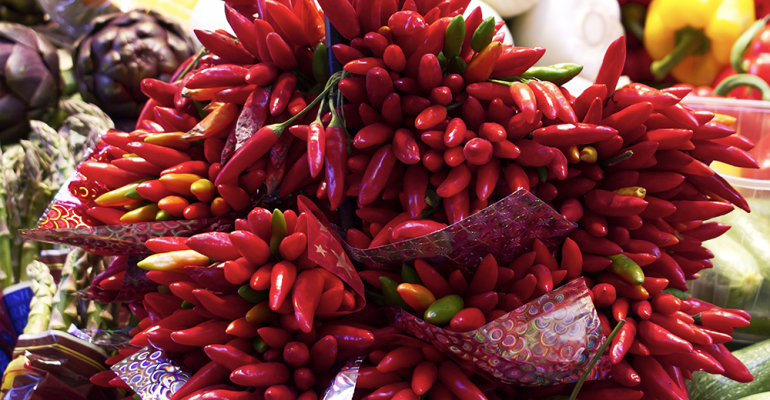 These moderately spicy peppers hail from the Calabria region of southern Italy — the toe of the country’s boot. They have smoky and fruity aromas.

These peppers can be found raw, dried or powdered, but are more commonly packed in oil or pickled. They’re used like many other chiles and can be found in sauces and salads and as toppings on pizza, toasts and spreads.

Related: Flavor of the Week: Microgreens add a healthy touch

Datassential reports that Calabrian Chile Pepper is gaining traction on independent casual-dining and progressive fast-casual restaurants. While only on 2% of American restaurant menus, the number has jumped 117% in four years.

A full one-third of the population knows about these peppers, a figure led by the Generation Z and foodie demographics, Dataessential says.

Related: Flavor of the Week: Treat parsnips like potatoes

Click through the slides for more information on Calabrian Chile Pepper — Datassential's Flavor of the Week — along with two menu inspirations that your restaurant might want to try.