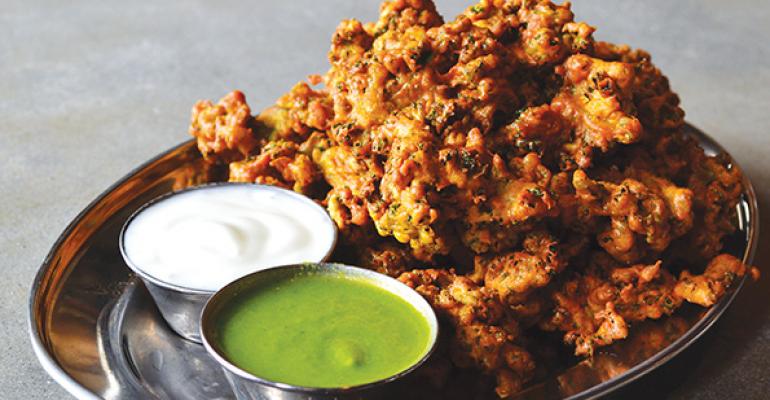 <p>At Chai Pani, which has locations in Decatur, Ga., and Asheville, N.C., chef Meherwan Irani prefers canola oil for its high smoke point and to ease concerns about allergies. The menu features such fried items as kale fritters.</p>
Seafood Trends

The fine art of frying

Americans love fried food, and eat a lot of it. The word “fried” appears on 73 percent of the more than 93,000 restaurant menus tracked by data analysis company Food Genius, and that doesn’t include descriptors that generally mean the food is fried, such as “crispy” or “crunchy.”

Fried food is trendy, too: Of all the menus that use the word “fried,” 44 percent are fast-casual restaurants, the fastest-growing segment in the industry, compared to casual-dining restaurants, which comprise 28 percent, and traditional quick-service restaurants that make up the remaining 27 percent.

Restaurants take a variety of approaches to frying, particularly when it comes to the type of fat used. Some use high-performance oils that will last a long time. Others lean more toward fats with flavors that they like, or they pick and choose oils depending on what food will be fried. And some split the difference, blending high-performance oils with those with preferred flavors.

That’s what chef Mike Tambasco does at The Mug, a self-described “farm to curb” drive-in restaurant that opened in Greenfield, Ind., last September. Owner Chris Baggott has a farm where hogs are raised, and Tambasco makes use of the lard for everything from fried chicken to bacon-wrapped, deep-fried apples. But he often supplements the lard by about 25 percent with locally produced sunflower oil.

“It kind of adds a little bit more of a crispy texture to the food, and it’s prolonging my lard a little longer, too,” Tambasco said, adding that, since the combined oils don’t get as hard as pure lard when they cool, it makes the fryers easier to clean.

“We end up with a lot of lard,” he said. “It doesn’t perform as well as peanut oil at high temperatures, but man, does it taste good.”

He cuts the lard by 50 percent with canola oil and uses that to make his red potato French fries.

“They really take on that pork fat essence,” he said. With the added canola oil it lasts twice as long, “and you get a lot more golden brown out of it,” he said.

He uses canola oil instead of peanut oil because of its more neutral flavor.

“I feel like if I’d mixed peanut oil and lard they both would have been fighting for attention, whereas with the canola the pork flavor really stands out,” he said.

Beyond a chef’s or owner’s taste, restaurant customers are probably curious about the oil used: According to the United Soybean Board’s 22nd annual Consumer Attitudes About Nutrition study, 75 percent of consumers are interested in the type of oil a restaurant uses, up from 70 percent in 2013. And 55 percent said they would be more likely to eat at restaurants using oils lower in saturated fat.

That’s good news for chefs like John Perkins, executive chef and owner of Juniper in St. Louis, who fries in vegetable oil. “We don’t have a huge, high-volume restaurant, but we’re a Southern restaurant and we do a lot of fried chicken,” he said.

Perkins recently switched from soy oil to high oleic canola oil. The switch was more because of the oil’s performance than its health attributes, however.

“It performs well and doesn’t degrade quickly,” he said. “It’s an excellent all-purpose frying oil for us.”

Michael Landgarten, owner of Bob’s Clam Hut, a 60-year-old restaurant in Kittery, Maine, specializing in simple fried seafood dredged in flour, goes through 76,000 pounds of frying oil each year. He says his vendors say that’s what restaurants 10 times his size use.

“That’s because we don’t think the oil lasts nearly as long as everyone says it does,” he said.

Landgarten has seen attitudes about frying oil evolve over the years. When he took over Bob’s Clam Hut just under 30 years ago, they were using MV oil, which stands for “meat and vegetable.” But “it was a high concentration of lard, and boy, was it good,” he said. It lent his fried clams and scallops a certain richness and flavor, he added, but it also burned up quickly.

Around that time a backlash against animal fats was underway, so he switched to 100 percent vegetable shortening. Then the news about the health problems associated with trans fats started to come out, and he switched to a trans fat-free cottonseed-canola blend that he uses today.

“We tried peanut oil, which was really delicious, but it does add a distinct flavor [that impacts the seafood’s flavor],” he said. “We prefer it with chicken.”

Landgarten says he extends the life of his oil by rotating his food through different fryers. He starts his seafood in the oldest fryer so loose flour particles fall off there, and then he moves it to a cleaner fryer and finishes cooking it there.

“The process is kind of labor intensive, but that’s our secret to having all our seafood cooked in really clean oil,” he said.

Bareburger, a better-burger chain based in New York City, uses a canola oil that’s not made with genetically modified organisms, which fits with the chain’s organic philosophy, said Andrew Sarda, the chain’s chef.

He might soon change to sunflower oil, which he said lasts a bit longer and, like canola, has a relatively neutral flavor. He said his customers’ biggest concerns when it comes to frying oil are allergens, which is one reason he doesn’t use peanut oil.

Allergies are also why Brian Landry, chef of Borgne in New Orleans, designates one of his fryers as shellfish free. All of his fryers contain cottonseed oil.

“It has a neutral flavor, and I find it has great life expectancy as well. It holds up really well to the kind of frying we’re doing,” he said, which includes a lot of frying in cornmeal. “I really like the flavor of the cornmeal, and sometimes other oils like peanut oil impart too much flavor.”

Peanut oil is the frying medium of choice in the Indian state of Maharashtra, but Meherwan Irani, chef of Chai Pani, with locations in Decatur, Ga., and Asheville, N.C., uses canola because of its high smoke point and neutral flavor, and to ease concerns of people with peanut allergies. He follows Indian tradition when it comes to frying temperature, however. In the United States, fryers are generally kept at around 350 degrees Fahrenheit, but in India they keep it about 50 degrees cooler.

Although animal fats fell out of favor for frying in the 1970s and ’80s, they’ve come back in recent years, particularly at independent restaurants.

Adam Sappington, chef and owner of The Country Cat in Portland, Ore., likes to buy entire carcasses and break them down in the restaurant. As a result, he has a lot of animal fat. So he fries his chicken in beef tallow using a cast iron skillet. He said the tallow’s density keeps it from being absorbed into the chicken “so the chicken’s not greasy at all.”

He also likes animal fat for sautéing mushrooms, and uses different fats depending on which mushroom he’s cooking. He cooks porcini and king oyster mushrooms in beef tallow.

“They’re super meaty and they fry up really well,” he said. “I also like the really hard, first crop of chanterelles that comes in around this time of year,” he said, noting that the dry climate in which this season’s mushrooms grow makes them firm and meaty. He cooks them either in tallow or pork fat, or a combination, and finishes them with whole butter “because we like the sweetness it brings to them.”

Duck fat’s expensive, though, so when Chip Ulbrich, chef of South City Kitchen Midtown in Atlanta, makes duck fat fries on special occasions, he blanches the potatoes in canola oil and finishes them in duck fat.

“It has a very clean flavor, but also a gamy flavor,” he said. He serves them with hanger steak and an onion ash aïoli — made by putting green onions on his pizza oven coals until they turn black, chopping them very finely and folding them into the aïoli.

He also makes pork testa in house, and a byproduct of that is lard infused with red wine, garlic and juniper. He uses that first to poach pork loin in sous-vide, and then he finishes the loin by frying it in more of the lard in a cast iron skillet.

Perez’s favorite animal fat comes from smoked bone marrow, he said. He cold-smokes beef bones over his pizza oven coals and then renders them in a pan so the marrow melts out of them. He sautés chanterelles and serves them with grilled focaccia around a crock filled with smoldering pine branches, accentuating the smokiness that comes from the marrow.