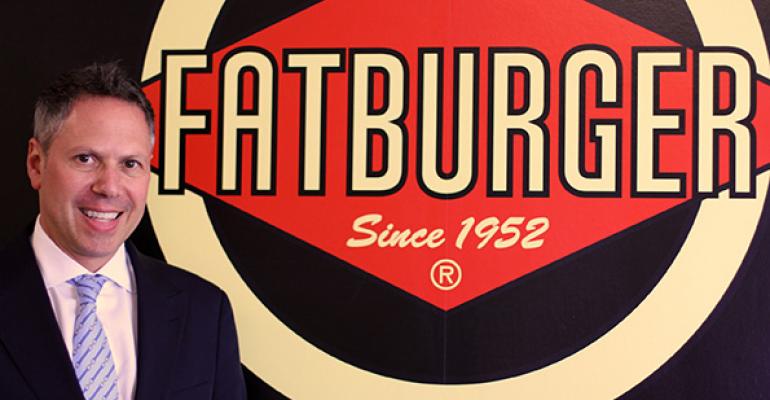 Fatburger slims down with ‘skinny’ sandwich

Fatburger’s “Skinny Burger,” with all-meat buns, has grown into a popular item for the concept over the past few months, chief executive Andrew Wiederhorn said.

The lower-calorie version of the Beverly Hills, Calif.-based chain’s third-pound burger debuted in Los Angeles, and has proven popular in Fatburger’s restaurants in the Middle East as well, Wiederhorn said.

The Skinny Burger features beef patties that are half as thick and sandwich cheese, lettuce, pickles and other condiments. It has about 32o calories, compared with about 590 calories in a burger with a bun and mayonnaise, Wiederhorn said.

Wiederhorn spoke last week with Nation’s Restaurant News about the new menu item, as well as its Buffalo’s Express concept, created after Fatburger parent Fog Cutter Capital Group bought the 25-unit Buffalo’s Café chain in 2011. Fog Cutter has owned Fatburger since August 2003, and has about 200 units.

What’s the idea behind the Skinny Burger?

We introduced it in Los Angeles a few months ago and it was well received. Our strength is the quality of our burger and the flavor profile. It’s a product that’s been around for 60 years and we haven’t changed the recipe at all. The burger has always stood on its own.

How did you create the Skinny Burger?

We didn’t want to do a lettuce wrap, just the same as everyone else. Our marketing department developed the Skinny Burger to highlight the strength of what we are offering, which is the burger.

How do you describe the Skinny Burger?

The patties essentially take the place of the bun. You really get the flavor of the beef as soon as you bite into it. You feel like you are eating a burger, not a salad with some meat in it.

Is it a challenge for portability?

It holds together well because it’s two slightly thinner patties that would make up what would normally be one burger. We wrap it in paper.

How do the calories compare with the traditional third-pound burger?

How are your newer combination Fatburger-Buffalo’s Express units configured and performing?

They share one back-of-the-house kitchen and one cash register and counter at the front of the house. It has two different menu boards. You are giving the guest all these additional food choices. We’re seeing 35-percent higher annual unit volumes with the co-branded units. Marginally, it doesn’t cost that much more to develop the co-branded unit because many items are the same in the back of the house.

Next steps for Fatburger

How many Fatburger locations do you have now?

What is your advice for any restaurant brand wanting to develop abroad?

You really have to build out your infrastructure abroad to support your franchisees. That’s an expensive endeavor. We started to do that in 2006, when we went into Canada, and then in 2007 into China and 2008 into the Middle East. We developed teams of people — operations, training, construction, marketing — based in each region to support our stores and our franchisees. It’s significant investment annually to do that. It’s not a onetime investment. You’d better have a lot of scale to start with or you’re going to spend a lot of money to get scaled up.

What are other possible hurdles?

There are all kinds of disruptions you experience domestically or internationally. You can always have food safety issues or a supplier problem with recalls. As a business, you have a plan for it. And you also have testing on a regular basis.

In eight years, what have been the biggest changes in each region’s support team?

In some markets we can use U.S. beef, in other markets we are prohibited from using U.S. beef. Dealing with local regulations has been the most complicated. Labor rules change as well.

What do you have to keep at top of mind in international development?

You have to be very sensitive to the local cultural rules and the reasoning behind those rules. We serve halal beef in the Middle East. In some markets, it’s easy for our training team members with a U.S. passport to go in there. But some of our team members with other nationalities based in other countries have trouble with immigration issues. That’s been the biggest challenge: visas and training staff.

What’s next for Fatburger?

We have a large pipeline. … We just opened in Malaysia and we’re going to open in the Philippines and Singapore in 2015. We’re excited about Southeast Asia, with how rapidly it is growing and the strength of American brands.