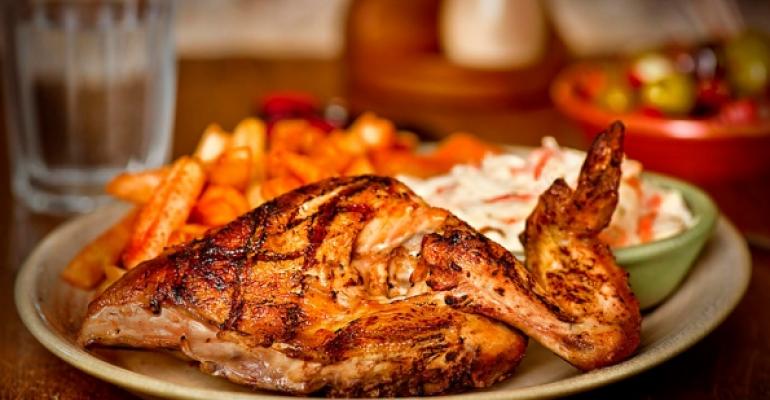 <p>Chefs predict that African flavors will be a surging trend in 2017. Photo: Nando&#39;s</p>
Consumer Trends

In 2017, the U.S. will be a global culinary village where condiments, sausages and pickles are made in house, according to the National Restaurant Association’s annual What’s Hot 2017 Culinary Forecast.

The NRA surveyed 1,298 chefs who are members of the American Culinary Federation and asked them to select from a long list of trends which are heating up, which are cooling down and which are perennial favorites.

In recent years, local sourcing of meat, seafood and produce have topped the list, and they did again this year, although the NRA categorized the results differently, listing perennially trending topics such as local sourcing, chef-driven fast-casual concepts, natural ingredients/clean menus, and environmental sustainability as “concepts” rather than food trends. Housemade and artisan ice cream such as this treat at Playa Provisions will be a big trend next year.

That paved the way for new cuts of meat, such as the oyster steak (from the backbone just above the rump, similar to a chicken oyster) and Vegas Strip steak (between the shoulder blade and the backbone), to top the list this year, although it scored around the same as in last year’s survey, with 71 percent of respondents saying it was a hot trend.

The next hottest trends, at 70 percent, are street-food-inspired dishes, such as kebabs and dumplings, and healthful kids’ meals.

Africa was the only specific region named in the top 20, with 66 percent of respondents saying “African flavors” were a hot trend. It was not clear whether chefs meant North African or sub-Saharan flavors. Chefs predict that protein-rich grains such as quinoa will be more popular in 2017.

New to the top 20 list of beverage trends, ranked 12th with 55 percent of respondents calling it trendy, is locally/house-roasted coffee.

The trend that got the biggest change in votes between this year and last was poke, the Hawaiian raw fish preparation. The NRA listed is beside ceviche last year, and 33 percent of chefs said the pair was a growing trend. This year, 44 percent voted for poke as a growing trend and 18 percent marked it down as a perennial favorite. By contrast, 25 percent said ceviche was growing, while another 36 percent said it was a perennial favorite.

Photos courtesy of Nando's, Playa Provisions and The Little Beet