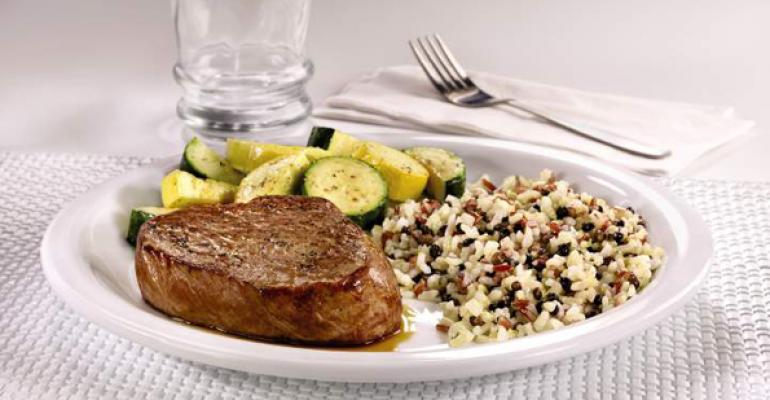 Denny’s added several new items to its menu this week as part of its “beyond breakfast” platform, including a prime rib cobb salad and sirloin steak entrée.

The goal of the menu addition is to broaden the company’s breakfast-centric marketing to other dayparts by focusing on burgers, shakes, steak, and other dinner items and treats.

“This [menu] was born out of, first and foremost, the broadening strategy to transform from a breakfast-all-day strategy,” said president and chief executive John Miller. “We talked really only about our breakfast items for the better part of 20 years.”

Gone are the days when a Grand Slam promotion was a silver bullet, he said.

“We believe that it’s important to hold onto breakfast share,” Miller said, adding that dinner foods had been a part of the Denny’s diner heritage decades ago. “To be able to go back to that, we’re sort of evolving backwards to go forward.”

In January, the company added 12 new menu items to the core menu, including a spaghetti-and-meatballs dish and a pot roast — both of which are top sellers today.

“We think these will catch on just like the ones in January,” Miller said of the 12 new July additions to the menu.

The new menu items are:

• Mango lemonade and strawberry lemonade, both made with real lemons.

• A sirloin steak entrée that comes with an eight-ounce steak and a choice of two sides. Miller said the company added two new sides, a steamed zucchini and squash and whole-grain rice, to go with the meat.

• Grilled tilapia with a choice of two sides. The item appears on Denny’s 55+ menu section.

• A BBQ bacon Cheddar burger, which is a hand-pressed beef patty served on a Cheddar bun, topped with bacon, Cheddar, lettuce, tomato and red onions.

• Smothered cheese fries, which are French fries topped with pepper Jack cheese sauce, Cheddar cheese, bacon and a side of ranch dressing.

• The BYO (build your own) sampler appetizer, which comes with a choice of three items, including jalapeno bottle caps, mozzarella cheese sticks and chicken strips.