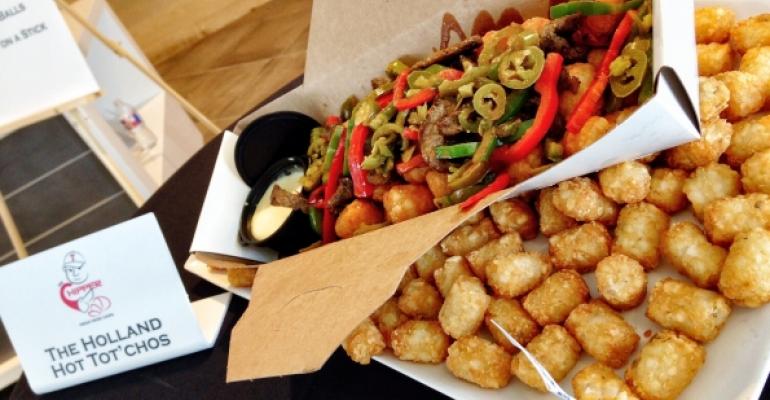 Bacon and just about fried anything will be featured prominently on ballpark concessions menus as Major League Baseball opens its season in Texas.

“We are featuring a couple of new stands this year,” Rapp said. “One is called ‘Just Bacon,’ where, as you can tell from the name, everything has to be about bacon.”

That includes bacon cotton candy and bacon lollipops, as well as bacon quesadillas, bacon macaroni and cheese, and a bacon-corn sauté. Items range from $8 to $12. The menu even features a bacon-maple ale from an Oregon brewery.

“It’s an homage to the State Fair, and everything there is fried,” Rapp said.

“Most of our items are packaged so you can carry them on a stick or in a small package,” Rapp said.

The ballpark this year debuted a larger, shareable item, priced at $17.50, called Holland Hot Tot’chos, named for Texas Rangers pitcher Derek Holland, who appeared at a press conference Thursday and tried them for the first time.

“It’s quite an honor to have a food named after you,” Holland said, proudly sharing them with his father, who attended the press scrum with him. “They are really good,” the pitcher proclaimed after his first bite. “And they are really are hot.”

The Tot’chos feature tater tots with a choice of chicken or steak, sautéed red and green bell peppers, pickled jalapenos, Buffalo sauce and a spicy queso hollandaise, served in a mini Dutch oven.

“Our thought is that it will fit nicely in your lap at your seat and you can share,” Rapp said. “You get a fork and eat your way to the middle.”

Rapp noted that quick-service drive thrus have shown how far a foodservice operator can go with container foods, citing Taco Bell as an example.

Rapp said ballpark customers usually consider food at a game to be an indulgence, so the menu offering is less focused on healthful fare and more on unique items, which this year include a Nacho Average Taco. It features a 24-inch taco shell with ground beef, seasoned chicken, shredded lettuce, nacho cheese, pico, jalapeno and sour cream, for $26.