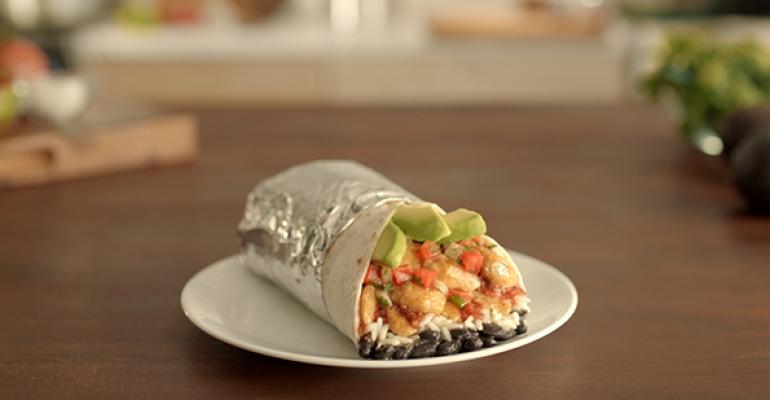 When Paul Murphy became chairman and CEO of Del Taco in February 2009, he was surprised to find that the quick-service Mexican chain didn’t take full advantage of its working kitchens.

Del Taco’s kitchens weren’t automated. So the brand, known for its extensive menu of items priced at less than $1, made its beans fresh every day and grated its cheese from blocks. Yet its menu — and its marketing — focused on low-cost items.

“They didn’t use it to their advantage in their messaging that they had fresh ingredients,” Murphy said. “It was all about value.”

The chain, which has nearly 550 locations and is based in Lake Forest, Calif., has spent the years since working to change that — while remembering its value heritage.

That effort has largely worked, and the chain is on a growth path again. Two years ago, Del Taco sold no premium items. Today, more than 10 percent of menu mix comes from a selection of higher priced fare, like its Epic Burrito and salads.

“We looked to broaden the occasion base we have out there by expanding the occasion set,” Murphy said. “A few years ago, we took a look at the marketplace and felt the emergence of fast casual changed consumers’ expectations around quality. But they still wanted value and affordability.”

“We feel there’s white space around quality and value between the Taco Bells and the Chipotles and Qdobas of the world,” he added.

It’s not easy for chains that emphasize value to switch to more premium items. This is true even now, six years after the end of the recession and at a time when the economy is growing.

Del Taco’s strategy didn’t simply begin by offering a large-sized burrito. The company instead started by sprucing up its restaurants.

Del Taco spent a year and a half quickly modernizing restaurants with artwork, dining room and painting.

“We did it quickly,” Murphy said. “We did not want this to be a three- to four-year thing. We wanted to move fast and signal change — and signal change internally to the associates we work with that the brand was on this repositioning journey.”

Next, Del Taco tested new menu items that take full advantage of its full kitchens. In November 2013 it introduced Epic Burritos, the first premium item, at a price of $5.

“I was a bit nervous,” Murphy admitted. “That was the first time we had an a la carte item at $5.” But, he said, the response was “great.”

“It’s the same size and quality as fast casual, but through Del Taco and at a better price point,” he said.

The company has since added salads and bowls. It has introduced Carne Asada steak, and last year gave customers the ability to add fresh avocado to its items. It recently debuted chorizo.

Del Taco also started adding “freshness coolers” behind the counters of its restaurants, where customers can see the avocados, the vegetables for the freshly made pico de gallo, the blocks of cheese and the raw pinto beans. Del Taco expects to have these coolers in 250 locations by the end of the year.

“It’s starting to take hold,” Murphy said. “People now come in and ask how much is a 40-pound block of cheese. Once you get a dialogue going about freshness or quality, that’s when it can start to build.”

The efforts helped build sales enough to lure the restaurateur Larry Levy and Levy Acquisition Corp., which merged with Del Taco last year and took it public in the process.

Murphy said the chain cut some items from its menu as it added its premium items. And all of its new items go through an extensive testing process, and are also vetted by a committee of franchisees and company unit operators to ensure that the product can be done effectively.

“There are items in the past that we thought would have been good but did not go through that process,” Murphy said. “Unless operators give it a green light, it goes back to the drawing board.”

He noted that the company hasn’t dismissed its value proposition, either. Indeed, Del Taco has 16 items on its “Buck and Under Menu.”

“We’re not trying to be Chipotle by any stretch,” Murphy said. “But when some fast-casual users have less money in their pocket, we’ve become a nice alternative for them.”

Indeed, he noted that three quarters of transactions are still in the realm of quick service. The chain’s average check is still below $7, lower than Taco Bell or Jack in the Box.

“While fast casual is the sexy new area, the larger lake is on the QSR side,” Murphy said. “We never want to lose our heritage.”

The effort to add more premium items to its menu could also open up the dinner daypart. Dinner represents 19 percent of Del Taco’s sales — its second strongest daypart. But Murphy said the company could increase dinner sales with improved items.

The chain is testing new plated meal options with items like wet burritos that could boost dinner sales.

“We believe we have good capacity in the dinner daypart,” Murphy said. “It’s a near-end occasion we can get after. We don’t play in that space.”