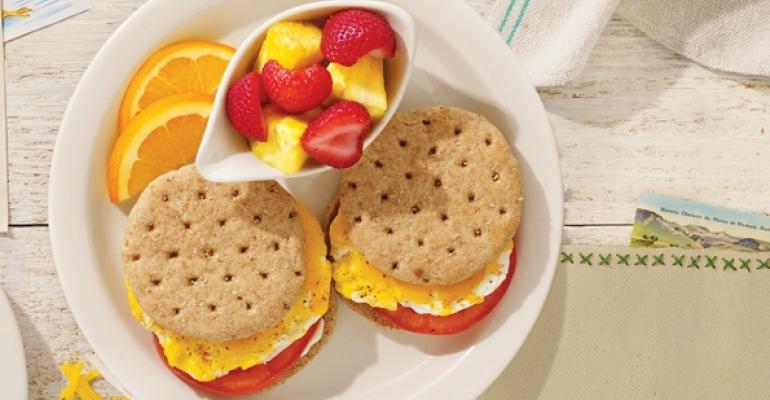 Cracker Barrel introduced a line of better-for-you items on Monday in its largest menu rollout in eight years.

The Wholesome Fixin’s menu is a line of eight new items and several side dishes, all with fewer than 600 calories.

The new line of lighter dishes is in part a response to guests’ observations that the restaurant’s menu was “a bit heavy or rich,” said Chris Ciavarra, Cracker Barrel’s senior vice president of marketing. “This is a long-term play,” he added, noting that, although customers are currently satisfied with the chain’s offerings, Cracker Barrel wants to make sure that the menu remains relevant.

The company surveyed more than 2,000 of its existing customers as part of the menu’s development process, which started in January 2012.

During the process, Bill Kintzler, the company’s director of product development, came up with between 80 and 90 new menu items that were eventually narrowed down for market tests in about 50 restaurants.

Guests in the test markets were surveyed before and after the introduction of the Wholesome Fixin’s items, and they scored the menu higher in regard to variety and healthfulness after the new items were introduced.

The new breakfast dishes all have fewer than 550 calories. They are:

• Multigrain French Toast: bread dipped in egg, baked and topped with seasonally changing fruit and honey citrus yogurt, for $6.59. The dish is made with bread that replaces the low-carbohydrate bread that the chain introduced 9 or 10 years ago.

•Fresh Fruit and Yogurt Parfait: a mason jar layered with yogurt, strawberries and raspberries and topped with the chain’s own granola that contains almonds, dried cranberries and cinnamon. The breakfast also includes Egg Beaters and turkey bacon for  $6.99.

New items on the lunch and dinner menu, which have fewer than 600 calories, are:

• Buttermilk Oven-fried Chicken Breast: a 5-ounce breast dipped in a combination of buttermilk and Cracker Barrel’s Vidalia onion dressing. The chicken is coated in seasoned cornflake crumbs and served with a steamed vegetable — either lightly seasoned, steamed broccoli or a mixed-vegetable blend of broccoli, cauliflower and carrots — and a choice of a Wholesome Fixin’s side for $7.99.

• Spice-rubbed Pork Chop: a seared pork chop that has been rubbed with a seasoning that includes garlic and smoked paprika, and then topped with a Creole marmalade made with Dijon mustard and orange marmalade. It’s served with a steamed vegetable and a choice of a Wholesome Fixin’s side for $8.49.

• Pepper Grilled Sirloin: 8-ounce USDA choice top sirloin coated with cracked black, pink and green peppercorns, served with a steamed vegetable and a choice of a Wholesome Fixin’s side for $10.49.

Already on the menu, but being folded into the new lighter line, is a grilled chicken and fresh vegetable salad. It’s a bowl of iceberg lettuce, romaine and spring mix topped with grilled chicken tenderloin, sliced tomatoes, whole grape tomatoes, sweet corn relish, country pepper vinaigrette and a cucumber-onion salad. The item is currently priced in the mid-$8 range, but Ciavarra said the chain plans to raise its price shortly soon.

Cracker Barrel will eventually support the new line with a marketing program meant to help change customers’ ideas of when they can visit the chain. However, Ciavarra said that the campaign would wait until after the operators are comfortable with the new items.

The Cracker Barrel chain includes 624 restaurants, all of which are company-owned.