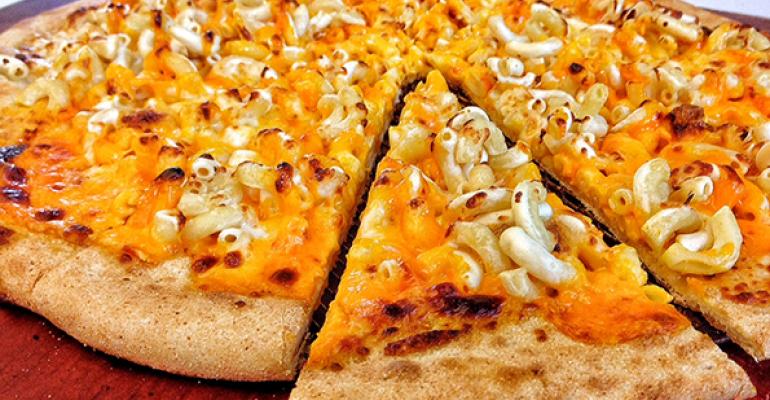 Chuck E. Cheese’s, which markets itself as the place where a kid can be a kid, is ramping up its menu so it also can be a place where a parent can eat like an adult.

And in October, the brand plans to launch its first limited-time offer, a Mac-Cheesy macaroni and cheese pizza.

Long recognized as much for its prosaic, child-friendly pepperoni-and-cheese pies as its signature mouse mascot, Chuck E. Cheese’s menu renovation that began in April is moving the cheese.

Casale said CEC recently conducted a blind tasting with 413 people, and 57 percent of them preferred the Chuck E. Cheese’s thin and crispy pepperoni over a similar pie from delivery powerhouse Pizza Hut.

While the pepperoni is popular, Casale said, “I would say the Cali Alfredo has been the No. 1 favorite. Parents recognize the ingredients as being better than what they usually see.” It has fresh mushrooms and spinach, as well as chicken and sausage. “The whole wheat wraps, including a Chicken Caesar, also appeal to moms,” he said.

Casale said Chuck E. Cheese’s had never had limited items, but that is changing this fall. The first limited-time offer will be a macaroni and cheese pizza, called the Mac-Cheesy, in October. It will run through the end of the year and be followed by pretzel dippers, Casale said.

“Although that sounds kid-centric, we all have a little bit of kid inside of us," he said. "I want the LTOs to be family friendly. The Mac-Cheesy is right up that alley. It will also offer parents something new and exciting on a regular basis.”

Thin and crispy crusts, which use the traditional Chuck E. Cheese’s dough stretched by hand onto a rectangular mesh baking screen, are a platform to which any pizza toppings can be added, Casale said.

“Millennial parents have been preened on brands like Panera and those higher-quality restaurants,” Casale said. “They also want what they want when they want it.”

Chuck E. Cheese’s has also added coffee to its units, and in some in-store tests offers specialty coffee drinks like latte and cappuccino. “The numbers on that look really, really good,” Casale said.

“The only pizza not made fresh in our stores is the gluten-free,” said Alexis Linn, CEC’s public relations manager. Chuck E. Cheese’s rolled out gluten-free pizzas in 2012.

Chuck E. Cheese’s has also rolled out a new tagline: “We’re not playing games with your food anymore.”

The menu renovation has roots in Casale’s background in fine dining. He opened Gregory’s Grill in Scottsdale, Ariz., in 1997, and followed it with Gregory’s World Bistro, open from 2001 to 2004.

CEC Entertainment, which is owned by private-equity firm Apollo Global Management LLC, operates and franchises 585 Chuck E. Cheese’s stores and 140 Peter Piper Pizza units. It has locations in 47 states and 11 other countries and territories.

“If there is one take-away,” Casale said, “it’s that Chuck E. Cheese’s is back.”