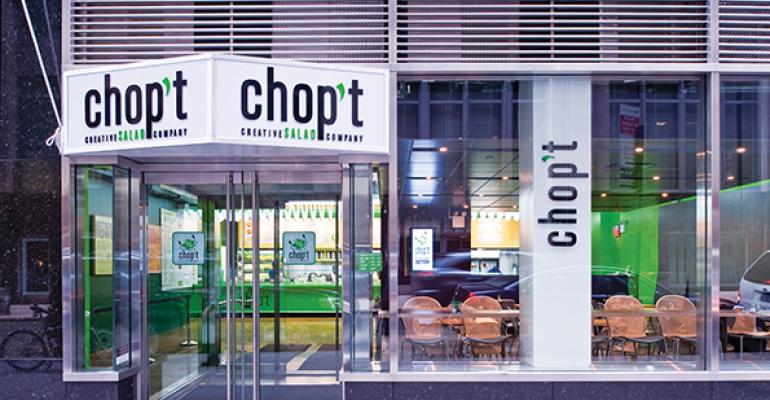 When Tony Shure and Colin McCabe opened their first Chopt unit in 2001, salad restaurants were a rarity. Now with 36 units in New York City, Washington, D.C., and their suburbs, as well as a new location in Charlotte, N.C., the co-presidents face an increasingly crowded salad marketplace, but still report robust sales increases each year.

With plans to open 10 locations this year, McCabe and Shure discussed their plans, purchasing and approach to staffing with Nation’s Restaurant News.

How have things changed over the past 15 years?

Shure: When we first opened a salad place, everyone thought we were ridiculous. People were like, “It’s not a meal.” We wrote our business plan in 1998 and they said, “That’s not a restaurant; it’s a side dish.”

So we were like, okay, we’re going to recruit people by putting in fried chicken and fried onions and all these things in our salad — to redefine salads so they could have steak and onion rings and blue cheese.

: They also can have a lot of flavor. A lot of people thought that a salad was very bland rabbit food. We try to hit people with a lot of flavor, so it’s not punishment; it’s actual food that you come back craving because it’s so flavorful.

We tried to appeal to everybody — to the women with yoga mats and guys in construction hats. People were laughing at us, so we couldn’t embarrass ourselves. We wanted to make the most delicious salad in the world so we wouldn’t fail.

You’re still around, so I guess it worked. Do you appeal to both groups?

Shure: We have the guys and girls that we recruit [as customers], who are reluctant to believe a salad will fill them up. So we have really heavy, powerful salads with steak and blue cheese. Then we have the customers who have very vegetable-forward, yoga lifestyles.

We take a lot of pride in still calling ourselves “fast food.” The whole quick casual, polished casual, fast casual, quick service — over the years it just started to be confusing.

McCabe: We’re built for speed; that’s the New Yorkers in us. When we started out we knew that if we were going to make it on 17th Street [the site of the first location] we had to be delicious and fast.

Shure: But it can still be a really nice dining room, and the ingredients can be as good as fine dining. We use free-range chicken, Satur Farms lettuces, California Olive Ranch olive oil in our dressing.

How does buying premium ingredients affect your food cost?

Shure: Often it’s double. And if you’re going through a million pounds of chicken in a year anything incremental adds up pretty fast. But we’re not trying to make money on one salad. We have to do it on volume. And we’re always improving the quality. Every single year our food puts to shame our food of last year.

What are some recent product changes?

Shure: The grass-fed beef was a big, expensive one. We’re going to use some heritage turkey. In North Carolina we went around and met the local honey guy. We’re getting rid of soda and only doing honey-sweetened lemonades and teas. The entire fountain beverage station is only going to be sweetened with local honey, and we’re going to expand that to D.C. and New York, where we’ve been using local honey in our dressings from the beginning.

McCabe: We’re always looking for better ingredients. Our lemon tahini is made with these giant Ethiopian sesame seeds. It’s wildly different from the standard ones. When we found it we built a [seasonal] special around the dressing.

How many of your customers are the yoga mat variety and how many wear construction hats?

Shure: It depends on the location. What we see is that people start one way and they start ordering healthier salads as they go along. We speak to customers who did the blue cheese every day for three weeks, then they tried the Mexican Goddess, which is all avocado-based, and then they tell us they’re doing three weeks on a plant-based diet. We hear all these stories about how they climb the rungs of the ladder. So we feel like they enroll at one level and start practicing on a higher level.

So once they realize that they don’t have to have a sandwich for lunch they start to wonder what else they can change about their lunch?

McCabe Exactly. And it changes with the seasons, too. In the winter people eat a little bit heavier, and then the spring comes with summer on their minds. That’s when we start to introduce some lighter menu items that are maybe a little less indulgent.

Shure: People do repent with salad. Monday is our busiest day, January is huge — the first three weeks of their resolution.

I know your New York restaurants are very busy at lunch. What is dinner like?

Shure: We do a pretty robust dinner in the suburbs. It’s interesting. We get to see Chopt used differently in different places. We have a totally different demographic in Midtown Manhattan than we do on 7th Street in D.C. than we do in Gaithersburg, Md., than we do in Charlotte. All the stores really behave very differently. As we go to new markets we’re trying to figure out how to be better for people at dinner — how to make it a no-brainer.

McCabe: We spend a lot of time thinking about how to make Chopt a dinner destination. And a lot of that is through our hot-topped salads that have more temperature to them. it also goes to the ambience. If you go to Chopt in Charlotte it’s darker, it has different zones of seating. And it’s our highest-volume restaurant for dinner. It’s about 40 percent of sales there.

Do your customers learn how to use your restaurants differently over time?

Shure: Yes. At more mature stores you have a greater mix of people creating their own salads. When we first open there’s a little bit of anxiety, the line behind you is long, there’s a gajillion ingredients and dressings, you’ve got to quickly come up with your order so you might as well just scream out “Cobb” so you don’t get trampled.

And then you gradually get better. Our restaurants tend to start out a little bit slow. Then people learn how to use it, sales build. Once they experience us through a spring and summer, then they’re really enrolled, and then every year we’ve been fortunate so far to see amazing sales comps. Also people are just eating more salads each year generally.

How’s turnover at your restaurants?

Shure: We have an incredible amount of people who have been with us for more than 10 years, including five of the original dudes at 17th Street who swept it when it was a construction site. Some of them didn’t speak English when they started and now run our busiest stores, and they’re managing partners so they participate in the profits.

McCabe: We’ve created this journey map that really fosters growth for everybody. Everybody has a way to become a manager and a managing partner so they can have ownership in the restaurants.

What are your expansion plans?

Shure: We’re ramping it up now. If you haven’t noticed there’s some competition in the salad game now.

McCabe: We spent a lot of time building the team to do the expansion right. We know what pieces to put together in order for us to do an expansion and never have to go back and fix it. I’m proud of every single restaurant we have. We’ve got a great team that’s been built over 10-plus years.

Shure: I think the max we’ll get to is one new restaurant a month, which is plenty fast. In fact, if it seems too fast we’ll dial it down.