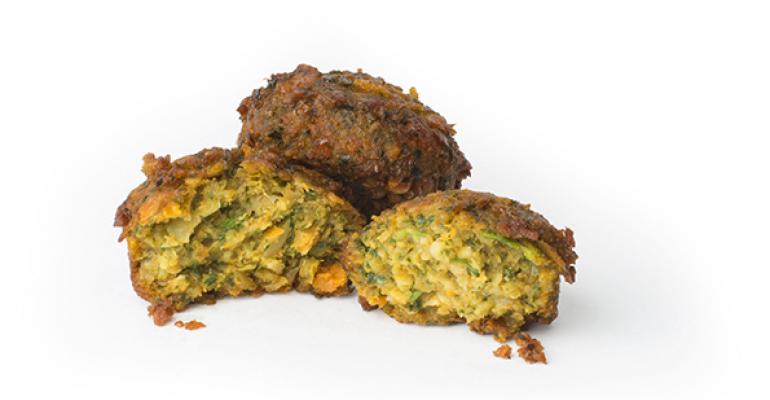 Falafel, hummus and other variations spread to independents and chains

Chickpeas are definitely having a moment. The legumes, which are inexpensive, nutritious and readily available, are staples in Middle Eastern and Indian kitchens, but have failed to live up to their potential in American restaurants until recently. The primary driver of their sudden surge in popularity is the rising number of fast-casual chains dedicated to Eastern Mediterranean cuisines and the prominence of falafel on their menus.

Falafel are fritters or patties made from ground chickpeas, and they are as common on Middle Eastern menus as hamburgers are here. They are, however, more adaptable and may be consumed as snacks or appetizers, stuffed into flatbread sandwiches or plated and topped with various salads or dressings. Chain chefs in the United States have made falafel the focus of considerable culinary creativity. Garbanzo Mediterranean Grill dubbed June “Falafel Freedom Month,” handing out complimentary fritters and introducing new flavors like cream cheese falafel, jalapeño falafel and sweet potato falafel. Roti Mediterranean Grill promotes “Food that Loves You Back,” and dishes up “crispy falafel” made from whole, organic chickpeas and flavored with garlic, cilantro and parsley, while the falafel at Naf Naf Grill is made with jalapeños and onions.

Falafel has a natural affinity for salads, and Sweetgreen, a maker of salads and grain bowls, has offered a falafel and feta salad with beets, romaine and mint in the spring and roasted eggplant and falafel salad with spinach, romaine and peppers in the summer. Salata touts its Next Generation Salad Bar and promotes its Mediterranean salad, a kale-based summer special topped with falafel, watermelon, cucumber, radishes and feta cheese in a lemon vinaigrette.

Chains are also using falafel in some distinctly nontraditional applications. Better-burger pioneer Umami Burger has a falafel burger featuring a falafel patty atop which are lettuce, tomato, tzatziki sauce and pickled red onion and beneath which is a bed of crushed avocado. It introduced it as a limited-time offer but recently made it a permanent addition to the menu. In the fast-casual pizza category, 1000 Degrees Neapolitan Pizzeria weighed in with an unexpected, limited-time-only falafel pizza topped with the titular fritter along with mozzarella and feta cheeses, tomatoes and arugula.

Unlike falafel, hummus, the dip made from mashed chickpeas, is relatively familiar to American diners. Like falafel, however, it has also been the starting point for lots of innovation. James-Beard recognized chefs Michael Solomonov in Philadelphia and Alon Shaya in New Orleans are both Israeli born, and they have raised that country’s national dish to an art form in their restaurants. Israelis reportedly consume more than twice as much hummus as their Arab neighbors, and chefs like Solomonov and Shaya are adept at using it as a culinary blank slate and carrier for a wide range of ingredients. At Solomonov’s Dizengoff, which specializes in hummus, diners can select a version with ground lamb, orange, cinnamon, mint and pistachio, while patrons at Shaya, which sports a broader menu that includes a hummus section, can opt for chanterelle hummus with wood-roasted corn, sunflower seeds and brown butter.

Crossroads in Los Angeles uses aquafaba, the liquid from a can of chickpeas that can be whipped like cream, to create vegan pancakes and macarons. Speaking of pancakes, Rose’s Fine Food in Detroit has changed up that breakfast standard with Le Dude 2.0, made with chickpea flour, along with olive oil, turmeric, cumin and scallions, all topped with tahini dressing in place of conventional syrup. And chickpea flour also figures in chickpea fries, a Mediterranean staple on the menu at Park Tavern in Portland, Ore., where they are accompanied by roasted squash ketchup.