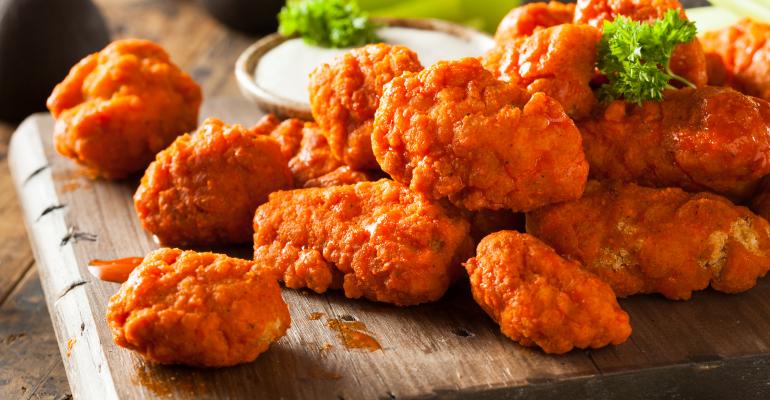 Summer is a fairly slow time for chicken wing sales, as consumers are grilling other meats and aren’t parked in front of the television watching football, which is the preferred venue for eating wings.

But wing prices, typically low at this time of year, have hit an all-time high, and are expected to rise throughout the fall and peak around Super Bowl Sunday in January — the biggest day for wing consumption.

Some operators are responding by deemphasizing bone-in wings and promoting tenders or boneless wings made from breast meat.

“Typically, we would not see this spike until late September, early October,” Dove said, adding that at the end of September last year, wings were $1.75 per pound.

Retail prices reflect a similar spike: the U.S. Department of Agriculture reported that whole wing prices this week averaged $2.62 per pound, compared with $1.85 a year ago. Buffalo Wild Wings reported that profit for the second quarter fell 62.9 percent, and Wingstop said the price spike had increased the cost of sales at company-owned restaurants by 410 basis points.

Minneapolis-based Buffalo Wild Wings has responded by changing its weekly Tuesday wing promotion to focus on boneless wings at its 607 company-owned restaurants. There were a total of 1,187 domestic Buffalo Wild Wings locations at the end of last year.

Buffalo Wings & Rings, which has 58 domestic units, is hoping to cash in on that fact, continuing with a Tuesday value wing pricing and “hoping someone will get a burger or quesadilla or salad,” to offset the high cost of wings, CEO Nader Masadeh said.

Although he’s also trying to convert customers from bone-in wings to boneless ones, “we have not pushed that avenue very much,” he said, because different types of wings tend to appeal to different customers.

“If a customer is coming in to eat wings, they are coming in for [either] bone-in or boneless. Their heart is set on one or the other,” Masadeh said.

However, 108-unit Wing Zone is trying to convince customers to convert by offering boneless wings at a better value. The chain has switched from medium-sized wings to jumbo wings, and converted all locations to a never-frozen product. Previously, around a third of the restaurants used frozen wings.

“So now we have some marketing opportunities there,” Friedman said.

The chain also changed order sizes, from seven-piece and 10-piece orders to six, eight and 10, now charging for eight pieces what they used to charge for 10.

To further differentiate the chain, Friedman said it was working on new menu items, including a breaded “Zesty Wing,” which was introduced in Wing Zone’s Panama and Guatemala locations. The item will be offered at a premium price as a limited-time offer starting in October and running through the Super Bowl.

Wing Zone also has tested a char-grilled wing that it hopes to roll out in 2018.

Meanwhile, Wingstop is rolling out what it calls split-menu pricing across its 922-unit system. The strategy of charging less for bone-in wings has been in test at 10 restaurants in Las Vegas since April.