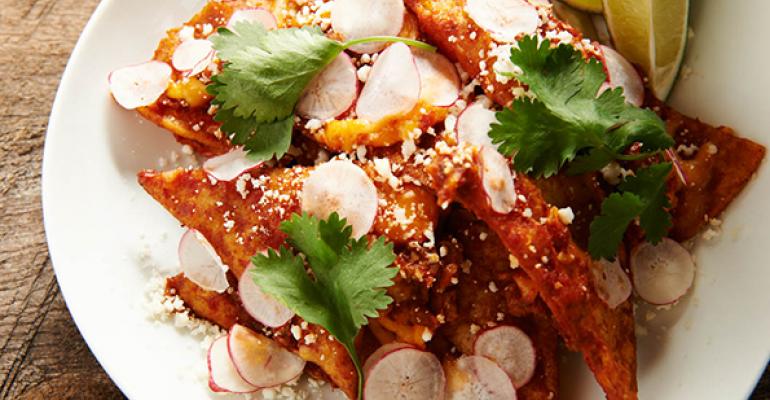 NRA survey shows African and Middle Eastern flavors are in

More chefs are reporting a growing interest in African and Middle Eastern flavors, artisanal beverages and ethnic cuisines and condiments, according to a recent survey by the National Restaurant Association. Kale, quinoa, underutilized fish and gluten-free food — not so much.

In September, the NRA surveyed 1,575 chefs who are members of the American Culinary Federation, asking them to rate 221 items as a hot trend, yesterday’s news or perennial favorites for menus in 2016. The NRA conducts the survey annually. “African flavors” was the item with the biggest increase in chefs declaring it a hot trend — up by 20 percent. Underutilized fish fell the most, by 11 percent, after being the fastest growing item last year.

There was a shakeup among the top 20 trends — those selected as “hot” by the most chefs — with seven newcomers on the list: chef-driven fast-casual concepts, ethnic condiments/spices, authentic ethnic cuisine, artisan butchery, fresh/house-made sausage, house made/artisan pickles and street food/food trucks.

The NRA defines “ethnic” cuisine as any cuisine that originated outside the United States or is identified with a particular region within the U.S.

No longer in the top 20, but still in the top 30, are non-wheat noodles/pasta, whole grain items in kids’ meals, fruit and vegetables in kids’ side items and “nutrition.” Other former top-20 items took bigger plunges. Artisan cheeses fell to 41, gluten-free cuisine was ranked 45 and non-traditional or underutilized fish fell precipitously to 101st place, with 40 percent of chefs saying it was yesterday’s news.

In recent years numerous chefs who specialize in seafood have been introducing so-called underutilized fish — lesser-known species such as sheepshead, sea robin, tautog and drum, often with a goal of developing interest in those fish to improve the sustainability of the fisheries of more popular fish, such as salmon and tuna. Although fewer ACF chefs saw this as a hot trend for 2016 than they did for 2015, 47 percent still said it had legs.

Topping the list of yesterday’s news, so-declared by 71 percent of chefs, is insects. Insects topped last year’s list of passé items, too, despite predictions by several trend watchers at the end of 2014 that consumption of the creatures would take off in 2015. Several companies focusing on cricket flour got new infusions of cash in 2014, and Wayback Burgers, a 100-unit chain based in Cheshire, Conn., introduced a milkshake with cricket in it as a limited-time offer this past summer. The Mud Pie Cricket Protein Milkshake was made with vanilla ice cream, Oreo cookie crumbles, Peruvian Chocolate Cricket Protein powder and chocolate and coffee flavors.

Although the chain declined to provide exact figures, chef Dale Miller, who developed the shake, said franchisees of the chain were surprised by how well it sold.
“It actually sold extremely well,” Miller said.

When it comes to beverage trends, notable newcomers to the top 10 list are non-traditional liquors, such as soju and cachaça, flavored tequila, and cask beer:

In terms of non-alcoholic beverages, mocktails are new to the top 10 list, and so is cold-brew coffee.

Of note in other categories:

Farro cracked the top five among starches and sides while quinoa slipped down to No. 6.