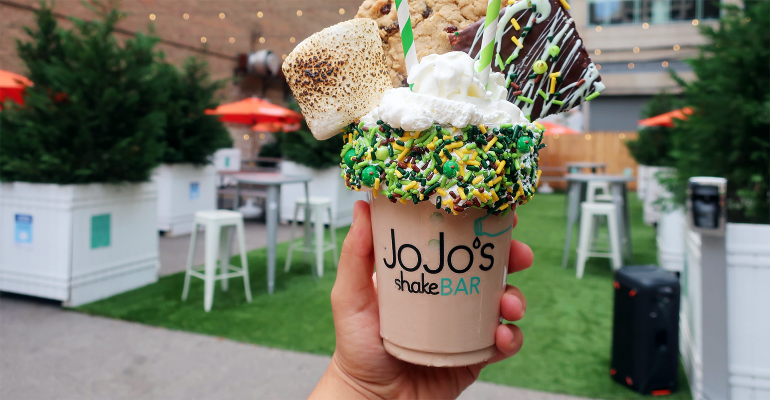 Chefs dream up some more s’mores

As comfort food goes, s’mores are in a class by themselves. The familiar combination of toasted marshmallow, chocolate and graham crackers, which takes its name from the contraction of the phrase “some more,” conjures nights around a crackling fire to generations of summer campers.

While the recipe is credited to the Girl Scouts of America and dates back to the 1920s, its winning trio of ingredients continues to engage contemporary restaurateurs looking for ways to surprise and delight diners. And while they’re often the basis for summertime specials, s’mores are also a source of inspiration to chefs all year round.

Some more dessert. Campfire Brownie + Cookie + S’mores is a fixture at all five Tom’s Watch Bar locations, which are positioned as the ultimate, can’t-miss sports destinations. Their popular, can’t-miss dessert comes in a skillet containing a half brownie and half chocolate chip cookie that is topped with toasted marshmallows and salted caramel and chocolate sauces, all served with a side of graham crackers.

In Los Angeles, B Sweet Dessert Bar built its reputation on more than 40 varieties of bread pudding available either in the cafe or from the Hot Bread Pudding Truck that dishes up flavors like Twinkie, Bananas Foster and S’mores. The Yellow House Cafe, also in LA, takes a DIY approach and invites patrons to cook up their own over a small, tabletop hot pot; skewers and requisite fixings are provided, of course. 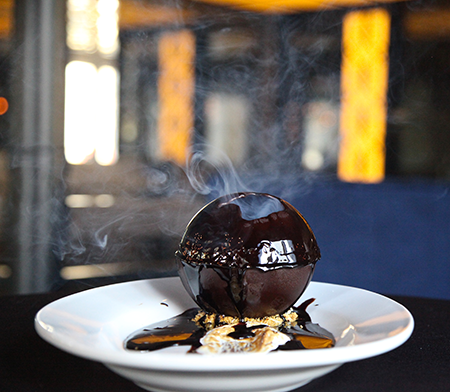 In Chicago, new-age steakhouse Prime & Provisions strikes a balance between approachable comfort and innovative design, which clearly characterizes the sophisticated, signature Smoking S’mores (pictured). Delivered to the table as a chocolate sphere, it quickly melts and releases a light cloud of smoke when the server pours hot chocolate sauce on top. Once that smoke clears, patrons are treated to deconstructed s'mores made up of graham cracker, homemade fluff, and gelato. And if s’mores are smoking at Prime & Provisions, they’re alight at Shore Club Chicago, where the Sparkling S’mores Tart gets its pizzazz from the addition of a sparkler.

S’mores score with chains. The S’mores Galore Pie from Shari’s, the broad-menu chain based in the Pacific Northwest and known award-winning pies, marries marshmallows and chocolate filling in a crunchy graham-cracker crust. The Melting Pot chain of fondue restaurants features an inviting S’mores Fondue, in which milk chocolate is swirled with marshmallow crème, then flambéed and topped with graham cracker.

Some more ice cream. A number of ice cream shops are dipping into s’mores. That’s the case at Santa Barbara, CA-based McConnell’s Fine Ice Creams, which operates six scoop shops throughout the region. The Los Angeles outpost of San Francisco-based Humphry Slocombe goes one better with a S’mores Sundae, while Cold Stone Creamery customers can special order S’more Some More Pie made with dark chocolate ice cream and finished with fluffy white frosting. 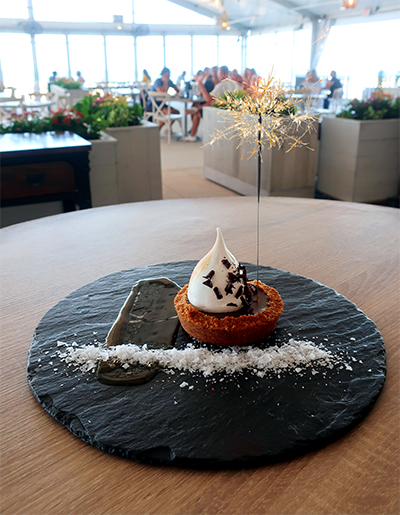 Coolhaus, which sells its creative flavors through trucks, scoop shops and supermarkets, offered Campfire S’mores Ice Cream by the pint just in time to celebrate National S’mores Day on August 10, while Ben & Jerry’s Gimme S’more, which is also available in pints, comes with a little something extra in the form of online instructions on how to craft a s’mores ice-cream cake.

Some more shakes. JoJo’s Shake Bar in Chicago has been turning heads with its over-the-top creations like the Girl Scout Milkshake. A madly photogenic variation on the s’mores theme, the mint-chocolate chip shake comes with a chocolate graham cracker, oatmeal raisin cookie and a s’mores marshmallow for good measure.

Sonic Drive-Ins promised everything but the campfire with its seasonal Toasted S’mores Shake. This summer’s limited-time offer combined ice cream, chocolate chunks and graham-cracker, crowned with marshmallow whip and a cherry.

Things are shaking in Las Vegas, too, where Holstein’s riffs on traditional burgers and shakes. The list of Bam-Boozled Shakes includes Campfire S’mores made with marshmallow vodka, chocolate pocky sticks, s’mores chocolate balls and vanilla frosting with graham crumble.

Some more treats. Doughnut makers are not immune to the allure of s’mores; in fact, s’mores doughnuts are a regular feature at Sublime Doughnuts in Atlanta and an occasional indulgence at Pinkbox Doughnuts in Las Vegas.  And cupcake bakers like s’mores, as with the special graham-cracker lined, dark chocolate cupcake filled with bittersweet chocolate ganache and finished with toasted marshmallow frosting available at Sprinkles.

Finally, trend arbiter Starbucks brought back its summertime S’mores Frappuccino this year to cool down the warm-weather months and serve as a warm-up act for the introduction of its juggernaut Pumpkin Spice Latte.