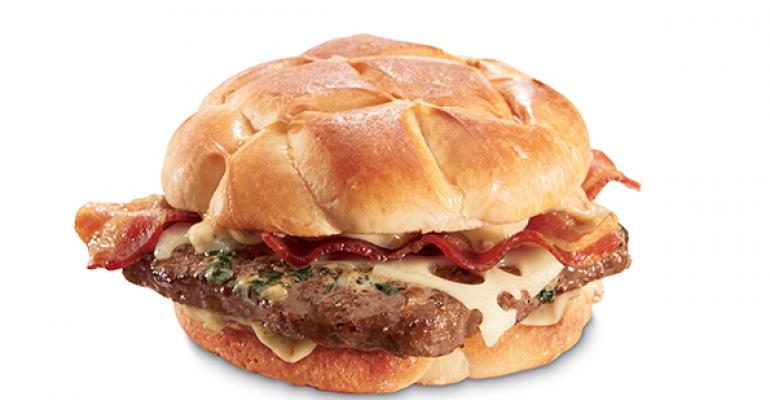 <p>Jack in the Box has found success with its Buttery Jack hamburger. The Bacon Swiss version is pictured here.</p>
Consumer Trends

A truly dramatic shift in Americans’ eating behavior is playing out in the area of fat consumption. Animal fats, demonized for decades as prime contributors to obesity and heart disease, are being rehabilitated as new research calls their culpability into question. The emerging generation of Millennial consumers has embraced animal fats for their chemical-free purity, and at the same time the Food and Drug Administration has outlawed artificial, plant-based trans fats. The net result is a big, fat renaissance for classic ingredients like butter, lard, beef tallow and more.

and French fries cooked in the stuff are appearing at spots like Burg in Newark, N.J., Lot 2 in Brooklyn, N.Y., and The Liberty in New York City. Chefs have also rediscovered confit, a method of cooking and preserving meat in its own fat. Traditionally used with duck, goose or pork, the technique delivers a luscious, unctuous product that has taken the starring role in traditional dishes like Cassoulet Toulousain at Etoile Cuisine et Bar in Houston, where the casserole marries duck confit with pork shoulder and sausage, along with the requisite white beans. Diners in Charleston, S.C., can partake in a duck-confit trifecta: A Duck Confit Sandwich made with aged Gouda and fig preserves at Caviar and Bananas, the promotional Duck Burger made with duck confit, goat cheese and apple jam at Big Gun Burger Shop, and Mike’s Famous Duck Club Sandwich made with duck confit topped with bacon and Cheddar at Tattooed Moose.

Confit is also trending more broadly as a prep technique that uses fat to bring out the best in a range of foods, like the sweet pepper confit that accompanies the chicken burger at Edge Restaurant & Bar in Denver, confit potatoes that go with whole branzino at Bottega Americano in San Diego and the confit egg yolk served with smoked monkfish tail at One Eared Stag in Atlanta.

Beef tallow has been winning new fans, too. Like duck fat, it looms large on French-fry menus. Indeed, it was the frying medium of choice at McDonald’s until 1990. When the chain switched to pure vegetable oil, it added beef flavoring to maintain the palatability of its popular side dish. Today, operators proudly promote their use of tallow, as with Flip Burger’s Beef Fat French Fries with smoked mayo/ketchup in Atlanta, and Dusek’s Beef Fat Frites with harissa ketchup in Chicago.

Some adventurous chefs have upped the ante with edible beef tallow candles. A great example is at Trentina in Cleveland, where the Table Bread course comes with both house-cultured butter and a candle made of beef tallow infused with rosemary, sage and thyme. When ignited, the candle melts over the bread and bathes it in beefiness.

Lard has regained prominence in both the sweet and savory kitchens. Bang Bang Pie and Biscuits in Chicago touts its use of leaf lard, which appears throughout the menu, as in the crust of the Triple Berry Jam Pie. Nearby Big Jones offers several Southern specialties made with house-rendered leaf lard. Aficionados know that leaf lard is the highest grade of lard, prized for its mild flavor and for the flaky baked goods it produces, and they also recognize lardo as a toothsome Italian salumi, made from cosseted pigs prized for the excellence of their fatback. Cured with herbs and spices, lardo typically serves as an antipasto. But lately it’s been popping up all over menus. At Fort Worth, Texas-based Thirteen Pies it’s in the Sea Salt and Herb’d Lardo Red Pizza with Calabrian chile and pecorino cheese; and at New York City’s Dominique Ansel Kitchen, the maple-apple Little Piggy Muffin comes with a slice of lardo melted on top.

And there’s more. Chicken fat, or schmaltz, a staple in Ashkenazi Jewish cookery, has been making the scene. It‘s part of the base for the Shio Ramen at Ivan Ramen in New York City, and it flavors the mashed potatoes at Honey Butter Fried Chicken in Chicago. Butter is back, too, notably at quick-service stalwarts McDonald’s, where it’s used on the Egg McMuffin, and Jack in the Box, where it is the headlining ingredient in the highly successful Buttery Jack hamburger promotions.