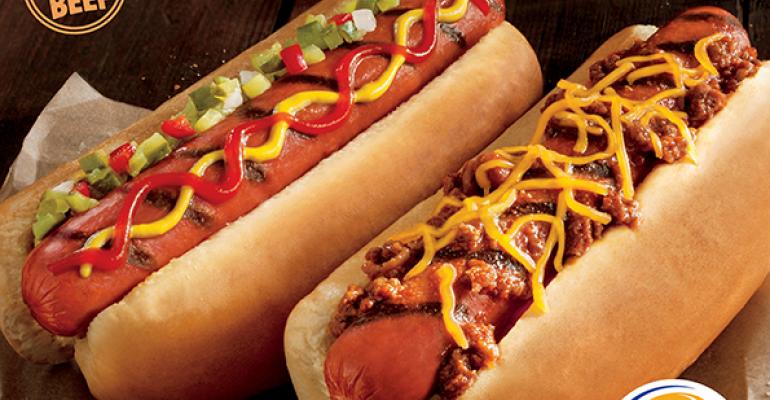 New item will be available nationwide on Feb. 23

Burger King is offering hot dogs at its more than 7,000 domestic locations, starting at select locations this week with nationwide rollout Feb. 23, the Miami-based company said.

The all-beef Grilled Dogs are being made on the same flame grills as the quick-service chain’s signature hamburgers and will be available in two varieties: The Classic Grilled Dog, topped with ketchup, mustard, chopped onions and relish in a bun; and The Chili Cheese Grilled Dog, topped with chili and shredded Cheddar cheese on a bun. Prices will vary by location, but the recommended price is $1.99 for the classic and $2.29 for the chilidog.

“The introduction of Grilled Dogs just made sense to our guests and for our brand,” Alex Macedo, Burger King’s president for North America, said in a press release. “We’re applying over 60 years of flame-grilling expertise with the Whopper sandwich to make Grilled Dogs the next great American icon.”

The hot dog itself is a custom product made for Burger King by Oscar Mayer. It was tested in five markets last year: Baltimore, Detroit, Kansas City, Memphis and Salt Lake City.

Pizza Hut stuck 28 pigs-in-a-blanket pinwheeling off the crust of its Hot Dog Bites pizza, available at its more than 7.800 locations last summer, and sister chains Carl’s Jr. and Hardee’s put a split hot dog on top of a burger, along with potato chips, for their summer limited-time offer of the All American Thickburger at their combined system of nearly 3,000 restaurants.

In its press release, Burger King said it was “dispelling the myth that hot dogs should be relegated to summer barbecues and baseball games.”