Denny’s chief brand officer John Dillon noted in a recent CNN Business Interview that the chain’s Sizzlin’ Skillet Supreme had fallen victim, at least temporarily, to menu simplification, but the good news is that other sizzlin’ favorites like Crazy Spicy Sizzlin’ Skillet made the cut on the newly slimmed-down bill of fare.

As diners return to post-pandemic dining rooms, skillets — along with other old-fashioned, don’t-get-at-home comfort foods — will reassert their crowd-pleasing presence and broad-based popularity, thanks to their value, abundance and presentation pop.

Applebee’s skillets trace their roots back to the chain’s early days; a menu from 1998 touts five varieties of Sizzling Skillet Sensations, like N’Awlins and Sicilian. The Bourbon Street Steak currently on offer is jazzed up with Cajun spices and garlic butter and served searing on a cast-iron platter. TGI Friday’s Sizzling Fridays Signature Whiskey-Glazed Flat Iron Steak is soy marinated and topped with Cajun-spiced onion rings, while Quaker Steak & Lube’s loaded mac and cheese skillet piles on extra cheese and pulled chicken or pork. 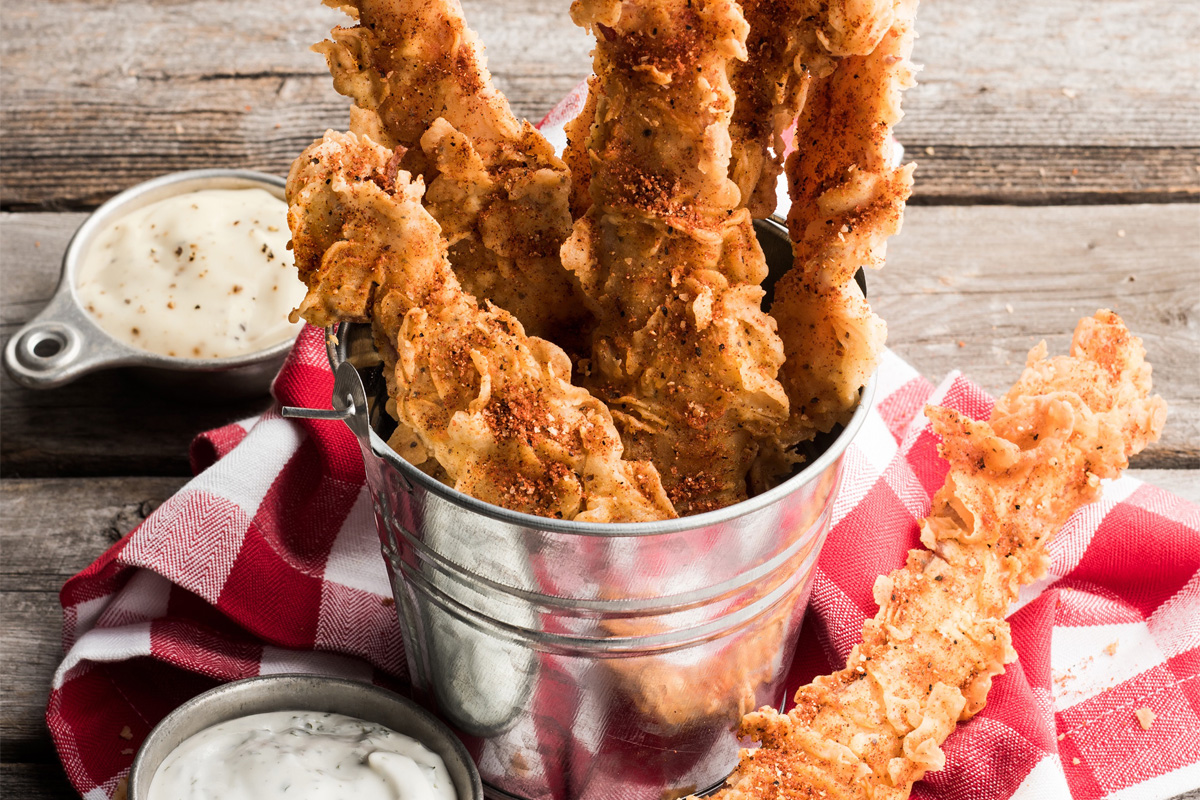 Why buckets are big. They telegraph abundance and value, as with KFC’s iconic bucket, which house-bound, finger-lickin’ consumers rediscovered to the tune of double-digit sales increases in May. This summer’s $20 Fill Up promotion invites diners to fill the bucket with their chicken of choice and throws in slaw, biscuits and mashed potatoes on the side.

Buckets also suggest shareable informality, as with Grapevine, Tx.-based Cotton Patch Cafe’s new chicken fried bacon bucket that consists of hand-breaded, Southern-fried bacon strips with choice of cream gravy or ranch dipping sauce. In fact, bacon and buckets seem to have a real affinity. They are paired in Southern Calif.-based Lazy Dog Restaurant & Bar’s bacon candy appetizer, which is baked in brown sugar, crushed red pepper chile flakes and black pepper, and in Nashville, Tenn.’s Logan’s Roadhouse’s bacon on a stick appetizer, in which the bacon is skewered on wooden sticks and placed inside a silver bucket lined with newspaper.

On the savory side, Prairie Grass Café in Northbrook, Ill. includes spicy chicken chilaquiles casserole as part of a family-style meal package. In downtown Atlanta, By George presents pot au feu (French beef stew) in a shiny metal casserole, while at Cold Beer nearby, a dish of deviled crab, sunchokes and preserved sunflower seeds comes in a brown enamel casserole dish. Skillet Cornbread with sorghum and butter is a popular starter course at no. 246 in Decatur, GA.

Looking ahead, when customers return to restaurants, they’ll crave the comfort of familiar foods served with style. Skillets, buckets and casseroles are humble vehicles that deliver a visual pop of reassurance along with their tasty contents.