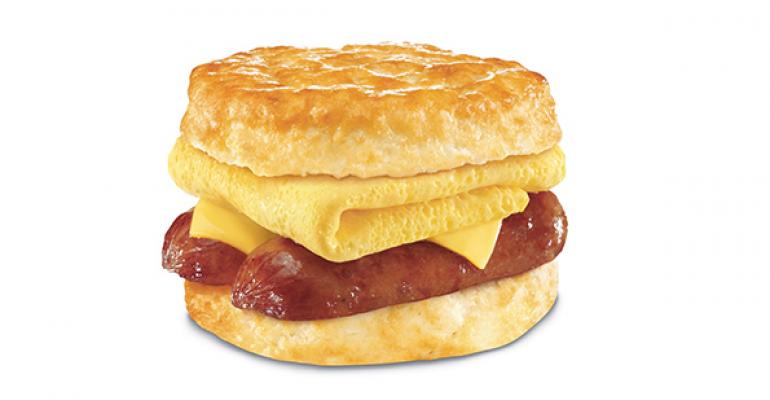 Of the many classic comfort foods with Southern roots, arguably none has transcended regional boundaries as successfully as the biscuit. A fixture on “what’s hot” lists for the past decade, its popularity shows no sign of flagging. On the contrary, market researchers at The NPD Group named the biscuit one of the fastest growing foods on menus last year. Key ingredients like low-protein flour, lard and buttermilk root it in the region and provide the inimitable flakiness and flavor that stoke its continuing popularity.

Southern style. A legion of newly minted biscuit specialists is keeping tradition alive south of the Mason-Dixon Line. Callie’s Hot Little Biscuit, with locations in Atlanta and Charleston, S.C., has a biscuit menu that runs the gamut from classic buttermilk to country ham varieties.

Chains headquartered in the South have built their business on the product, as with Bojangles’ Famous Chicken ’n Biscuits, which touts its made-from-scratch biscuits and runs promotions like heart-shaped Bo-Berry Biscuits for Valentine’s Day to allow fans to show their love for the product.

Hardee’s also demonstrates its scratch-made bona fides with specials like the Bacon Swiss Chicken Biscuit with Egg, which is made with buttermilk fried chicken, applewood smoked bacon and melted Swiss cheese.

Operators around the country have been working overtime to create a Southern connection. In Portland, Ore., Pine State Biscuits mixes “old-style Southern goodness … with a Portland foodie sensibility” to yield a broad menu of biscuit sandwiches like The Regina, with fried egg and braised greens doused in hot sauce.

Nearby Tilt proffers handcrafted food and drink built for the American workforce, like the Blue Collar Biscuits served all day, every day.

To the north in Seattle, Biscuit Bitch “takes biscuits from the trailer park to the table.” In a nod to Northwestern sensibilities, diners there can opt for a vegetarian, gluten-free shiitake mushroom gravy unlikely to be found in the typical trailer park.

At Morsel, the biscuits are “made by people who care,” and they care enough to concoct specialties like the Cheesy Biscuit topped with roasted garlic butter, cheese curds and roasted tomato jam.

Biscuit mania has swept the Midwest as well, especially Chicago, where biscuits abound.

Biscuit Man has built a loyal following by baking his namesake specialty in the side kitchen of a hip north-side bar. Toppings include homemade bacon and milk gravy with herbs and chili powder.

Bang Bang Pie & Biscuits promotes its use of lard to yield a reliably flaky biscuit, like the one that’s toasted and topped with pimento cheese.

The fried chicken specialists who have taken Chicago by storm are also on board with biscuits. Leghorn puts fried chicken sandwiches on biscuits, along with unconventional condiments like kimchi barbecue sauce and red jalapeño aioli; and at Honey Butter Fried Chicken, the brunch menu features Biscuits & Gravy with fried egg and house-made chicken-fat gravy.

Beyond breakfast. Biscuits have clearly received a boost as breakfast programs have expanded in the limited-service segment. While McDonald’s rollout of all-day breakfast has met with widely bruited success, its biscuits are only offered around the clock in Southern states, where some franchisees have upped the ante with a Tender Pork & Gravy Biscuit.

But biscuits aren’t just for breakfast. Church’s Chicken’s Chicken & Biscuit Bites are built for snacking and use small versions of their popular Honey Butter Biscuits. Buffet chains Sweet Tomatoes and Souplantation feature Chicken Pot Pie Stew with buttermilk biscuits that can be used as toppers, a patron favorite that reappears regularly in cold-weather months. And Cracker Barrel has announced the launch of Holler & Dash, a fast-casual biscuit house that will open this year in a suburb of Birmingham, Ala.