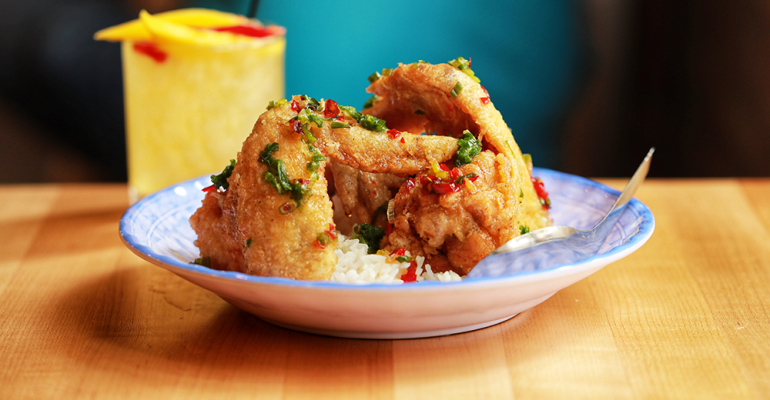 The bar snacks get new ‘options and variety’

Americans are expected to eat more than 16 billion chicken wings this year, according to the National Chicken Council.

The poultry trade body projects that our nation’s farmers will produce around 9 billion broilers this year, of which around 10% will be sold as whole birds and the rest chopped up into parts. We used to export a lot of our wings to Asia, but domestic demand has skyrocketed in recent years as wings have become a favorite bar food, and so we’ll likely eat all of them domestically, a Chicken Council spokesman said.

Most of those wings will be the classic Buffalo variety, flavored with tangy hot sauce that stimulates the palate and encourages beer drinking. But with so many wings out there, and so much competition for customers, operators are branching out into new flavors to set themselves apart and keep their customers engaged.

“It’s a traditional American food. Obviously they and football go hand-in-hand,” said Kenny Caulfield, one of the owners of The Ashford in Jersey City, N.J., which opened in December and has a large sports bar downstairs, an artisanal cocktail bar upstairs, as well as a rooftop. No matter where guests sit, they can choose from the restaurant’s nine different wings, including proprietary spicy Firecracker, pineapple teriyaki, three different kinds of barbecue, mango habanero, sweet chile, garlic Parmesan and the classic Buffalo. All of them are baked in advance and then fried without breading to order. 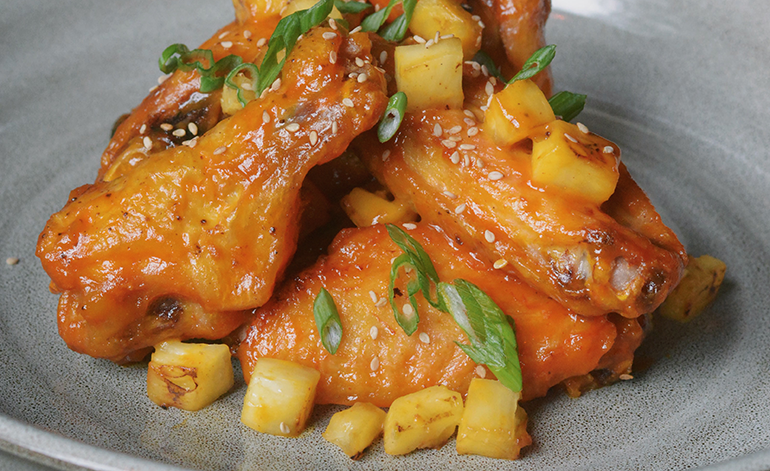 The Ashford’s guests can choose Pineapple Teriyaki or among eight other wing dishes.

“People like options and variety,” Caulfield said. “When you have a big group, not everybody likes the same flavor. We have something for everyone.”

It’s true that wings are traditional American food, but it’s a relatively new tradition. Buffalo wings — fried, doused in hot sauce and served with carrot and celery sticks and blue cheese dressing — are new enough that, unlike most dishes, their origins aren’t lost to history, nor even in dispute: They were invented in 1964 at Anchor Bar in Buffalo, N.Y.

Since then, they have become a wildly popular bar snack and a football tradition, particularly during the Super Bowl, when Americans eat more than 1.3 billion wings over the course of the weekend, according to the Chicken Council.

But wings have long been a favorite treat elsewhere, particularly in many Asian countries where they’re prized for their robust flavor that comes from the high bone-to-meat ratio.

At Haisous in Chicago, chef Thai Dang does a variation of Vietnamese Cánh Gà Chiên Nước Chấm, or fried chicken wings served with the traditional condiment of sweetened fish sauce with citrus.

Traditionally made by marinating chicken wings in a combination of fish sauce, sugar, garlic and chile, and sometimes other spices, and then frying them, Dang said he didn’t like how the salty fish sauce dried out the wings, and how the sugar in the marinade darkened them. So instead he brines the wings overnight in a solution of a little sugar, garlic and salt — but less salt than the traditional marinade — coats them lightly in rice flour, and fries them at 325 degrees Fahrenheit to cook them through. Then at service he crisps them up in a 375-degree fryer for three minutes and then tosses them in a sauce made of similar ingredients as the traditional marinade: He cooks fish sauce and sugar into a caramel with chiles and garlic, and then, as the sauce cools, he adds scallion, just to wilt it but not cook it.

“So now you have this crispy wing with the glaze all over the chicken,” Dang said. “The meat-to-sauce ratio is perfect … and it’s still succulent and juicy.”

At Mortar & Pestle, a two-unit bar attached to the San Jose, Calif., and San Mateo, Calif., locations of fast-casual concept Curry Up Now, offers wings named after Tangra, the Chinese section of the Indian city of Kolkata.

“Over the years, they started to open eateries and adjusted the food to suit the Indian palate,” he said in an email.

Curry Up Now developed a sauce that reflects that cuisine, made of soy sauce, plum sauce, oyster sauce and a proprietary blend Kapoor said is like Sriracha sauce. It’s spiked with the chain’s Desi hot sauce — a fiery blend of Carolina Reaper, Trinidad Scorpion, Ghost and Habanero peppers. Deep-fried chicken wings are tossed in that, garnished with toasted sesame seeds and nigella seeds and garnished with seasonally changing microgreens.

Ken McCoy looked to Korean cuisine for inspiration for his wings at The Flying Cock, one of his bars in New York City.

McCoy also has an Irish pub, where Buffalo wings do the trick, but The Flying Cock is more eclectic, with a robust cocktail menu and less traditional food.

So his chef developed a sauce made with Korean chile paste and powder spiked with ginger, garlic, soy sauce, sesame oil, sugar and some other ingredients.

The wings are boiled in a proprietary herbaceous vegetable stock for half an hour, then refrigerated, fried to order, tossed in the sauce and garnished with scallion, fried onions and white and black sesame seeds. 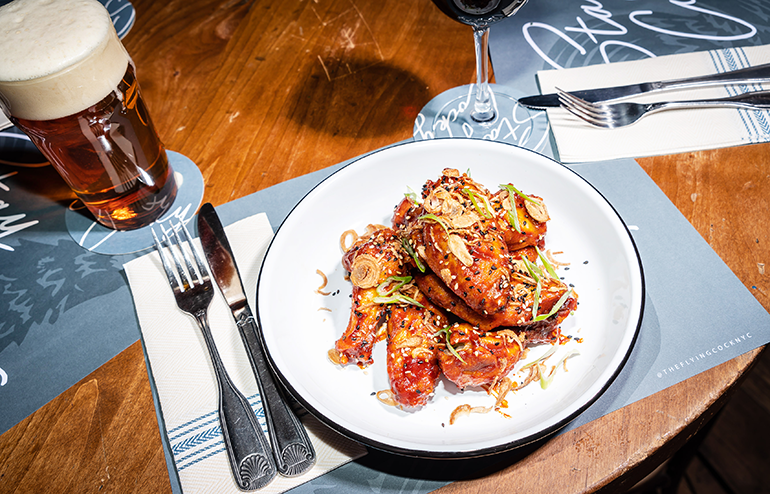 “They’re tangy, sweet, and spicy — you kind of check all the boxes,” he said.

Like many operators, Mangum cooks his wings to an internal temperature of 160 degrees Fahrenheit or higher before frying them, so he can focus on finishing them to the right texture without worrying about whether they’re cooked or not.

He uses the same rub as his other chicken preparations — salt, pepper, paprika, cayenne, garlic, cumin and a few other spices. “It’s not overly complicated,” he said.

He lets the wings sit in the rub overnight and then smokes them gently: “The smoke should kiss the meat, not hug it,” he said.

He dresses in a paste of raw and fermented chiles, garlic, lime, honey and vinegar that he says is reminiscent of an Indonesian sambal. Finally he garnishes them with Maldon sea salt, toasted sesame seeds, cilantro and scallions.

“They’re my favorite thing on the menu,” he said.

Chef, restaurateur and consultant Brian Duffy is about to open the casual-dining concept Ardmore Q in Ardmore, Pa., outside of Philadelphia, with three different wing styles, and he has general advice about how to make good wings.

“It’s a small amount of meat, so you’ve got to back down the salt in your brine,” he said. He doesn’t want to shorten the brining time, because he wants the salt to permeate the meat so the wing is juicier, but he only uses about half the salt.

For one method, Duffy doesn’t brine the wings at all. He just tosses jumbo party wings in apple cider vinegar with a little standard Cajun seasoning, lays them on a sheet tray and bakes them at 350 degrees Fahrenheit for 25 minutes. He cools them, and then at service fries them for two minutes. Then he tosses them in a glaze of beer, honey, corn syrup and a little whiskey and puts them on a hot grill to caramelize the sugar for 30-40 seconds.

“They’re crispy on the outside and perfectly moist on the inside,” he said. 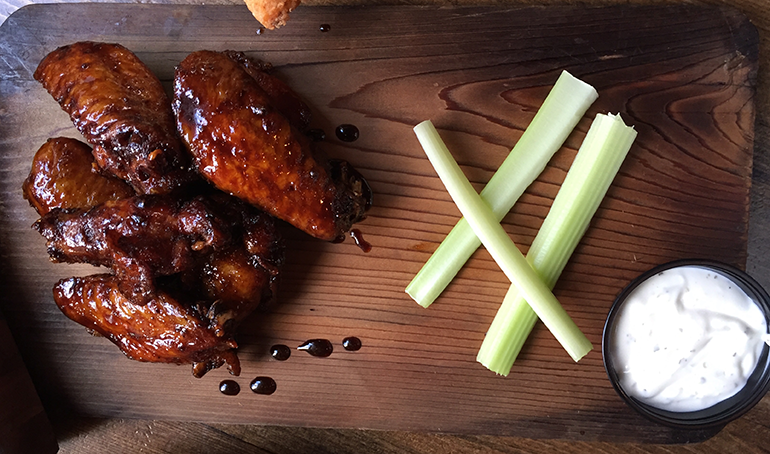 At Mighty Quinn’s Barbeque, “the smoke should kiss the meat, not hug it,” when preparing the wings.

For another method, he brines the wings for 12 hours in his half-strength solution with a little brown sugar and honey. Then he smokes them at 225 degrees Fahrenheit for an hour and a half.

“They almost plump up from cooking at a low temperature,” he said. Then he fries them at service and serves them with a charred tomato aïoli.

Finally, for a third method he uses an herbaceous brine with rosemary, thyme and marjoram. Then he tosses them in a little olive oil and coats them in microplaned garlic mixed with those same herbs, smokes them, chills them and then roasts them with a little chicken stock — to help keep them moist and to heat them faster — at 450 degrees for six minutes, and garnishes them with microplaned lemon or lime zest.

“People are a little tired of the traditional Buffalo wing, but they like the comfort of the wing,” Duffy said. “I love to give people options of things they already feel comfortable with.”