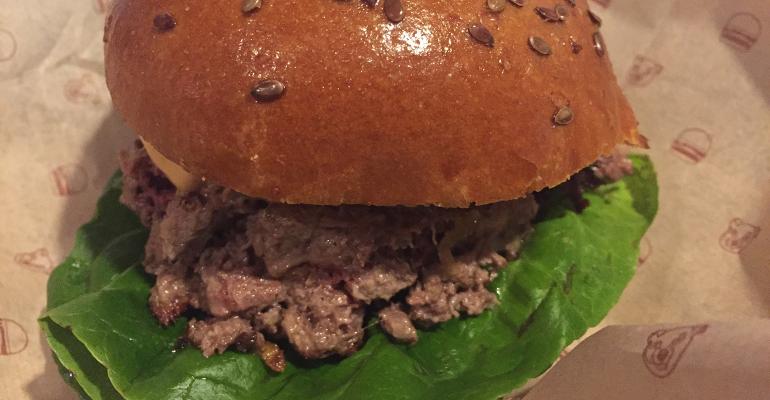 Bareburger will become the first restaurant chain to offer the meatless “Impossible Burger” when it begins selling the item on its permanent menu on Thursday.

Until now, the product, developed by Redwood City, Calif.-based Impossible Foods, has only been available at a handful of high-end independent restaurants in New York, San Francisco and Los Angeles.

“My first taste of the Impossible Burger was a surreal moment: A burger that was delicious, simple, clean and sustainable? I couldn’t believe it,” Bareburger co-founder and CEO Euripides Pelekanos said in a press release. “I know this may sound cheesy, but I truly believe that serving the Impossible Burger at Bareburger will help make the world a better place.”

This will be the first time the manufactured meat substitute will appear on a menu alongside meat-based burgers. It’s also the first time it will be customizable. The regular build, with American cheese, little gem lettuce, stout caramelized onions, dill pickles and signature special sauce on a brioche bun is priced at $13.95, the same as the chain’s bison burger.

The item will only be available at one Bareburger location, near New York University, in New York City.

New York City-based Bareburger is a casual-dining chain that specializes in naturally raised, sustainable foods and a wide variety of protein options. Besides beef and bison, the chain also offers elk, duck, wild boar and turkey, as well as a black bean patty and a sweet potato and wild rice patty.

Heme gives the Impossible Burger its meat-like quality, according to Impossible Foods.

Since it’s not made from meat, Impossible Foods founder Patrick Brown said it uses an eighth of the greenhouse gas, a quarter of the water and less than one-twentieth of the land area needed to produce ground beef.

Brown was named to NRN’s Power List in January.

But production levels remain low, which is why the burger will only be available at one location for now, Pelakanos said. He added that he would like to roll it out to all of Bareburger’s 43 locations.

This summer, Impossible Foods plans to ramp up production by opening a new manufacturing plant in Oakland, Calif.