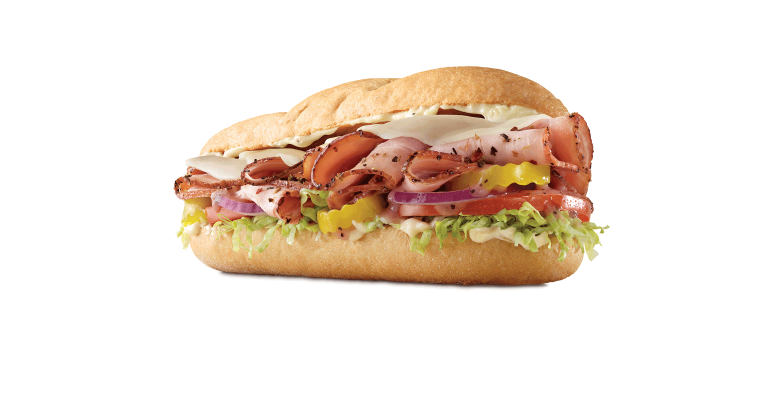 Arby’s is rolling out porchetta sandwiches to its more than 3,200 restaurants nationwide, the chain said Tuesday.

The meat — pork loin wrapped in pork belly and smoked for eight hours, is being supplied by Sadler’s Smokehouse of Henderson, Texas, which also provides the Atlanta-based chain with its smoked brisket.

The new meat is available in two sandwiches through the end of August. The Mount Italy Sandwich, for $6.99, is made with the porchetta along with thinly sliced smoked ham, salami and pepperoni with Italian seasoning, melted provolone, lettuce, tomato, red onion, banana peppers, red wine vinaigrette and garlic aïoli on a toasted star top roll.

Arby’s said the meat is based on a style of porchetta dating back to 15th century Umbria in central Italy. The new meat is the latest in a line of new proteins rolled out by Arby’s. In April it became the first national chain to offer lamb, which it combined with beef and Mediterranean spices as a Traditional Greek Gyro sandwich that was a limited-time offer for that month — on flatbread with red onions, lettuce, tomatoes and tzatziki. Later that month it introduced a Smokehouse Pork Belly Sandwich made with three pieces of thick-cut, hickory smoked belly with smoked cheddar, fried onions, barbecue sauce and mayonnaise on a toasted roll.

Also currently on the menu, through August, is a Pizza Slider made with pepperoni, salami, provolone and garlic marinara sauce, which was introduced in May.

Arby’s also made headlines last fall with the very limited introduction of a venison sandwich, available only for three days at 17 restaurants in communities where deer hunting is popular.

It has since brought back the deer meat, farm-raised in New Zealand, for special occasions, such as the opening in March of the chain’s new location in New York City.