The Boston-based fast-casual chain added two soups to its winter menu: Baked Stuffed Potato – potatoes and smoked bacon with a rich and creamy sauce, spring onions and chives – and Turkey Chili – ground turkey, black beans and vegetables in a tomato base with spices.

National Soup Month fans can go to 2nd Floor, which opened recently in New York City, for its P’tcha – a twist on traditional Ashkenazi Jewish fare that is made with veal bone broth, garlic and fresh parsley.

This Dallas steakhouse translates elote, a popular Mexican street food, into a soup with its smoked sweet corn bisque – a creamy corn soup topped with wild boar bacon, cotija cheese and cilantro oil. The dish is served in a cup for $4 or a bowl for $6.

The Miami restaurant touts a curried butternut squash soup on its menu this season.

The Indian restaurant in Nashville, Tenn., has a special lunch item during the winter: tomato and lentil curry soup paired with spiced Provel cheese on artisanal bread and a green tomato pickle.

The Eddy
The Eddy

The menu at The Eddy in New York City features Eastern European flavors, like the oxtail and ancho borscht with almonds, labneh and cilantro.

The Dallas spot will enjoy National Soup Month with its Chicken & Dumplings — a savory cream broth with chicken, dumplings, made from the dough of the housemade biscuits, and touches of cayenne and thyme.

For the special food-dedicated month, the New York City unit of Moscow-headquartered Coffeemania is putting borscht and cauliflower soup with soft poached egg and garlic chili on the menu as a welcome haven from the cold weather.

This spot in Miami Beach, Fla., can enjoy soup and noodles together in its Pubbelly Ramen — featuring lemongrass brother, barbecue pork belly and bean sprouts.

Blatt Beer & Table in Dallas and Omaha, Neb., is stirring up beer cheese soup for the winter. The creamy concoction is made with lager, smoked paprika, chives and grilled pretzel bread, and is available in a cup for $5 or a bowl for $7.

For health-focused diners, the San Diego market and café offers housemade bone broth ready to drink in a flavor that changes daily — like Vietnamese pho or Parmesan tomato basil. The portable sip comes in a 12-oz. size for $7 and a 16-oz. size for $9.

Diners looking for a warm bowl this month can stop by this New York City spot for the Grandma Chicken Mixian, which features mixian rice noodles, chicken confit, black sesame garlic oil and an assortment of toppings and housemade condiments.

The Chicago dining destination boasts a Build-Your-Own ramen menu during lunch where guests can choose from toppings like sliced Korean beef, tiger shrimp and more. The bowl starts with basic noodles, scallions, carrots and a poached egg for $8.

This San Diego eatery is rustling up roasted squash and lentil soup, priced at $8, and pairing it with housemade sourdough croutons for guests looking to warm themselves this season.

Whiskey Cake in Plano, Texas, offers chicken noodle soup but with a twist; the hearty dish is made with housemade chicken sausage and chili.

Mexican flavors shine in this Dallas joint’s Sopa de la Abuela, a mix of rice, vegetables, chicken and pico de gallo. The soup is available in a cup, $7, or bowl, $11. 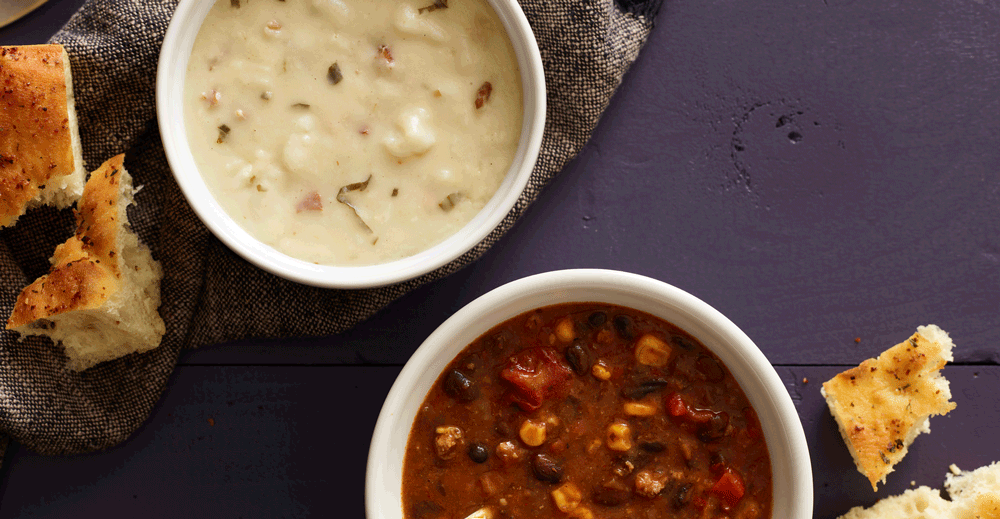