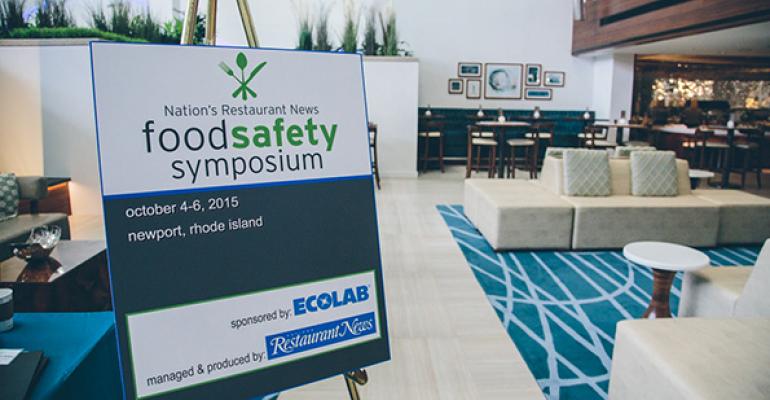 That was the position of three food safety professionals who spoke during the 10th Annual Nation’s Restaurant News Food Safety Symposium, sponsored by Ecolab, which was held Oct. 4-6 in Newport, R.I.

Miriam Eisenberg, manager of food safety and public health for the EcoSure division of Ecolab, offered her thoughts about what might be included in future additions of the U.S. Food and Drug Administration Model Food Code.

The Food Code, which is updated every four years, but may have annual supplemental information appended, had its last full edition issued in 2013. It is intended to assist local, state and federal jurisdictions by providing a scientifically sound technical and legal basis for regulating retailers and foodservice. Provisions from editions issued as far back as 1995 or as recent as 2013 have been incorporated in part or wholly into the rulebooks of more than 3,000 regulatory agencies.

Eisenberg said that restaurant managers will become “more and more crucial as an applied science team member as we go forward.”

She noted that some states and other jurisdictions, either on their own or by adopting “certified food-protection manager” provisions from the 2011 Food Code supplement, now require that foodservice establishments have a supervisory employee certified for food safety knowledge by an American National Standards Institute-accredited program. That requirement compares with an older requirement still used by some jurisdictions that such a person in charge “demonstrate knowledge” in a less formal way.

“It is important that you keep your eyes on that and know if you have to be certified or not,” Eisenberg said.

“It is thinking about them [managers] as being the person who answers to the regulatory agency when they come in,” Eisenberg said. Among other things, she added, “There is more information that is being required of them, in terms of understanding disease monitoring for foodborne illnesses.”

“So it really is becoming more of a mini HACCP [manufacturing like hazard analysis critical control points process] in terms of what you do every day,” she said.

Again referring to managers she urged, “Help them understand and learn because it is putting more of a burden on their shoulders.”

“I think the next big thing we will be looking for is allergens” centered, Eisenberg said of likely additions to future Food Code editions, although she acknowledged that she has not seen clues as to whether such rules would be around training or simpler requirements such as allergen awareness posters or menu notices.

Apart from hearing about the Food Code and the latest developments around the U.S. Food Safety Modernization Act, as highlighted by Ruth Petran, Ecolab vice president of food safety and public health, conference participants were briefed on news from the Global Food Safety Initiative, or GFSI.

An industry-driven global collaborative platform to advance food safety that initially focused on manufacturers and two years ago began developing guidance for the retail industry, GFSI this year launched a technical working group to create the concepts around which compliance schemes and certification programs could be built for the benefit of foodservice food safety.

Tom Ford, vice president of food and food safety for the global retail services arm of Ecolab, who is part of the GFSI working group for foodservice, explained how the developing compliance and certification program might look to operators.

“You have a corporate component that you build your systems on — you have recall procedures, you have training programs, you have supplier programs — and that is all housed in your corporate entity. And then you have this [system] enacted at the restaurant level,” he said. “They [auditors] are going to have to spend time at your corporate office seeing if the systems are appropriate and match with what the schemes say they should and what the key elements say they should, then they will go to your restaurants to see whether this is actually happening.”

Ford said he thinks his technical working group can wrap up its job next March in Berlin, although he conceded that it will still be some time before a viable program is in place for foodservice because the underlying infrastructure, such as the compliance schemes by third-party companies and an army of competent auditors needed to verify compliance, don’t yet exist. However, he indicated, the retailer program is fairly close to fruition, and its launch should provide clues as to how GFSI voluntary certification will be received by the targeted industry.

“The first thing you will see from this will be a grocery chain from around the world that says, ‘I’m certified,’ and your upper management is going to go, ‘What is this?’ and you’re going to say, ‘Two years from now, we’ll be chasing this, as well,’” Ford predicted, adding later that he thinks doing the right thing and “peer pressure” will be strong motivators among business owners to get certified.

Cindy Jiang, head of global food safety and supply chain compliance for McDonald’s Corp., who is also active in GFSI programs, explained, “The reason we want to do this is that we want to harmonize food safety requirements for retail and for foodservice.”

“We have seen the benefits of having globally recognized food safety schemes for manufacturers, and now, more and more governments — for example the U.S. FDA, and in Canada and Holland and the Chinese — are trying to leverage GFSI food safety certification in their countries,” she said.

Along with the other obvious incentives to support strong universal food safety standards and compliance schemes, Jiang said such an approach should also be appealing to companies interested in greater efficiency.