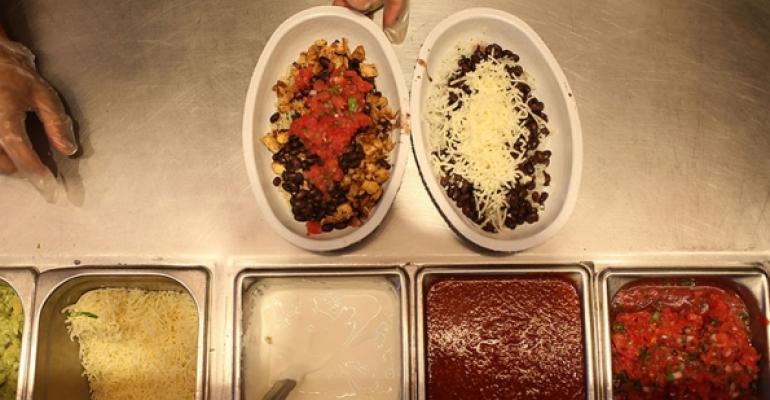 Earlier this month, Denver-based Chipotle announced new testing of produce and protocols for suppliers. This week, the fast-casual operator outlined food handling methods for its restaurants that included blanching onions before cutting, adding cilantro to hot rice to kill pathogens and other preparation techniques.

In an interview with the Associated Press, Mansour Samadpour, CEO of IEH Laboratories, which was hired by Chipotle to evaluate its food supply procedures, said: "When you're given a project like this, you look at the universe of hazards.”

E. coli linked to Chipotle restaurants has sickened at least 50 people in 12 states since October, and a norovirus outbreak earlier this month at a Boston College restaurant affected another 140 customers.

Among new cooking techniques outlined Wednesday, Chipotle said it will:

• Dip fresh onions in boiling water to kill germs before cutting.
• Marinate raw chicken in re-sealable plastic bags rather than bowls.
• Place fresh cilantro in hot rice to kill germs on the garnish.
• Shred cheese before it is sent to the restaurants.
• Chop and test tomatoes, cilantro and other ingredients in a central location before sending them to the restaurants.
• Use acidic lemon and lime juice to kill germs on some produce.
• Test 60 samples of every 2,000 pounds of steak before it is shipped to restaurants. A similar program is expected for chicken. Pork and barbacoa beef are already sent to stores pre-cooked and in sealed bags.

Earlier this month, Chipotle said it would do more high-resolution testing of all fresh produce for potential pathogens, including DNA-based tests of all fresh produce before it is shipped to restaurants, a program that company officials described as far exceeding requirements of state and federal regulatory agencies.

Chris Arnold, Chipotle’s communications director, said in an email Wednesday that “some of these new programs and practices are in place now (such as high-resolution testing of produce and steak, with such testing of chicken now beginning, and washing and cutting of tomatoes in a central kitchen, for example), and we are implementing others as quickly as we can.”

Arnold added that “with all of these enhancements in place, we are confident that we can reduce the risk of contamination to a level near zero.”

“We have this desire to be the safest place to eat,” Steve Ells, Chipotle chairman, founder and co-CEO, said earlier this month. “We’re going to be the best in the world at food safety, and we’re taking this very, very seriously.”

A series of foodborne illness outbreaks, which began in the summer in California and Minnesota, and expanded in October to Oregon and Washington, have taken a toll on Chipotle’s stock price and the brand’s “Food With Integrity” customer perception.

At midday Wednesday, Chipotle’s stock continued to trade at less than $500 a share, falling this week below that mark for the first time since May 2014. The price has dropped by more than 30 percent since shares closed at more than $750.42 on Oct. 13.

Chipotle warned earlier this month that it expected the outbreak to drag down same-store sales for its Dec. 31-ended fourth quarter for the first time since it became a public company in 2006. It said same-store sales could fall in the range of 8 percent to 11 percent.

And the foodborne illness outbreaks have bruised Chipotle’s reputation among consumers, according to a Reuters poll released Tuesday.

The Reuters/Ipsos poll found that 23 percent of U.S. consumers who had heard of recent E. coli outbreaks were deciding to dine less often at Chipotle. But the survey of 829 adults between Dec. 17 and Dec. 21 found that 62 percent had not changed their habits, and 3 percent were more likely to eat at Chipotle.

The Reuters/Ipsos poll also found that the consumers concerns were spilling over to other brands in the industry, with 15 percent of those surveyed eating less often at other quick-service restaurants after learning about people getting sick from food at Chipotle.

Update: Dec. 23, 2015  This story has been updated with comments from Chipotle’s spokesman.