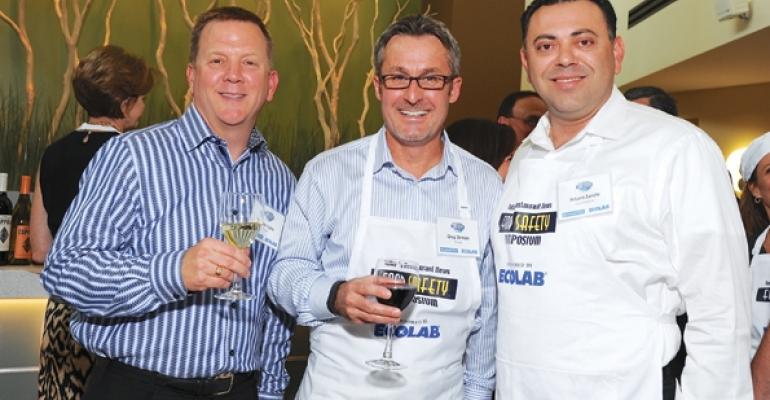 The two-day conference was sponsored by Ecolab and produced by Nation&rsquo;s Restaurant News.

Collaboration — both within restaurant companies and with suppliers and industry peers — is crucial to ensuring a food supply that’s safe from farm to fork, agreed attendees at the eighth annual Food Safety Symposium held in Denver this month.

During the two-day conference, sponsored by Ecolab and produced by Nation’s Restaurant News, nearly 40 food safety professionals discussed the many ways they build systems that encourage collaboration and vigilance, especially among employees.

Food safety “needs to be part of your core values,” William Moore, director of safety and security for Eat’n Park Hospitality Inc., the Homestead, Pa.-based parent of the 75-unit Eat’n Park family-dining chain, said during his keynote speech. “If it’s not in your core values, your mission statement, then it’s not a priority.”

The symposium occurred against the backdrop of a Cyclospora outbreak that had sickened 642 people in 25 states, leading to 45 hospitalizations but no deaths, throughout the summer. The cause of the outbreak was still under investigation at press time, although a salad mix from Taylor Farms de Mexico served at Darden Restaurants Inc. in two states had been implicated in about 240 of the illnesses.

In discussing the outbreak during the symposium, William Marler, an attorney specializing in food safety cases with Seattle-based MarlerClark, said he too was perplexed by the situation and had yet to file any lawsuits. The scope and complexity of the outbreak, however, underscored the responsibility of each player in the farm-to-fork chain.

Here are some other top takeaways from the symposium:

1. Make food safety training engaging. Hand washing and proper holding temperatures — the basics of food safety — have not changed in 30 years, said Moore of Eat’n Park. The key is keeping the message fresh so that employees pay attention.

With a workforce largely under the age of 25, employers need to make sure their messages are quick and easy to grasp. Moore said he relies on lots of colorful visuals, and customized posters, comics, video clips featuring celebrities, games like Pandemic 2, and stuffed-animal germs and microbes are among his favorites.

Tugging at the heartstrings doesn’t hurt either, said several attendees. Al Baroudi, Ph.D., vice president, quality assurance and food safety for The Cheesecake Factory Inc., the Calabasas Hills, Calif.-based operator of 175 upscale casual-dining restaurants, shows his audiences an image of the hundreds of children and adults that have died during foodborne illness outbreaks to drive home the point that lives are stake.

Food safety messages must be crafted differently for different constituents — especially to encourage collaboration, said Jorge Hernandez, senior vice president, food safety and quality assurance for US Foods, a foodservice distributor based in Rosemont, Ill. For instance, unit-level employees at Chick-fil-A are given a summary of their health department inspections that eliminates agency speak and highlights the actions they need to take immediately, said Hal King, Ph.D., the 1,670-unit Atlanta-based chain’s director of food and product safety.

At US Foods, Hernandez hired a former regulator to talk effectively with inspectors. And senior executives need to hear numbers — including sales at risk should a food safety event occur, as well as the costs associated with potential lawsuits — to capture their attention.

Chick-fil-A begins with daily self-assessments conducted in a downloadable self-assessment app. Those results are reviewed instantly at the unit level and weekly at the corporate level to pinpoint potential issues. “We leverage smartphones to leverage behavior on the employees,” King said.

Similarly, third-party assessments are conducted one-on-one with real-time corrective action. “We find a violation and we stay there and coach them through,” King said.

The 560-unit Bob Evans Farms family-dining chain sets its units up for audit success with an internal website that includes, among other information, sample audits so unit-level employees have the tools to pass real audits. Employees also have several references on food safety, sick workers and cleaning on site.

Bob Evans publishes audit results weekly, and gives incentives, such as gifts, money and year-end bonuses, for outstanding performance. “The best part of my job is when I go out to see the managers and reward them,” said Richard McKinney, senior director, food safety and quality assurance for the Columbus, Ohio-based chain.

Operators can help reduce food-safety risks by making sure that the holding equipment they use is designed and maintained to keep foods below 41 degrees Fahrenheit and above 135 degrees, and that employees regularly monitor foods in holding with calibrated thermometers, Petran said.

But while that may sound easy to accomplish, Petran cited data collected at 420 restaurants, including chain and independent venues, that showed that that the ambient temperature in equipment holding cold food measured greater than 41 degrees 16 percent of the time. Further, related observations indicated that cooling pans were not shallow enough to ensure good contact between food and surfaces in direct contact with cold baths; that there was limited ventilation in cold storage areas; that foods were improperly stacked on top of each other in coolers; that there was an insufficient amount of ice in cold baths; and that managers who said they were trained did not properly monitor time or temperatures 41 percent of the time and had thermometer calibration issues 31 percent of the time.

At Texas Roadhouse, crisis simulations run with the help of a consultant give employees a chance to test procedures in a real-time manner and identify and correct shortcomings, said Patrick Sterling, director of risk management for Louisville, Ky.-based Texas Roadhouse, a 400-plus-unit casual-dining chain.

Simulations should incorporate all aspects of the management plan being tested, Sterling said. For example, if the simulation is to test your company’s reaction to a major foodborne illness outbreak, don’t start with an understanding that an outbreak is underway and launch right into the reaction of corporate executives, but rather begin the drill by having simulated calls come in from restaurants or health departments to a corporate hotline, if that is the procedure.

“You can’t prepare for every crisis,” Sterling said. “So you have to have smoldering crisis and surprise crisis templates. Because each crisis is unique, tabletop exercises test the system. [Your plan] may look great on paper, but you need to test the system.”

6. Look for the signs of potential problems and act on them. Closely monitor internal communications and public health developments for indications of possible food-safety problems, advised attorney Marler.

“I can't think of a foodborne illness outbreak that I’ve been involved in that — and I always get the benefit of hindsight — that when you look back over what happened before the outbreak, there wasn’t always a sign or two that you could have done something to turn the bus around before it went off the cliff,” the veteran litigator remarked.

Marler obtained many millions of dollars in compensation for victims of the deadly 1992-93 multi-state E. coli O157:H7 outbreak from undercooked burgers sold by Jack in the Box. In that case, he cited an unheeded pre-outbreak notification from the Washington state department of health about the need to cook burgers to an internal temperature of 155 degrees Fahrenheit, versus the 140-degree standard indicated by the federal Food Code at the time. He also pointed to a suggestion faxed from a store-level employee with the idea of grilling burgers longer because some were not being fully cooked and customers were complaining.

Marler, who advocates a full range of disease screening and reporting by public health agencies, as well as additional pathogen testing at the manufacturing level to prevent oubreaks, added that if California had been among the handful of states in 1992 that publicly reported O157:H7 illnesses, the Jack in the Box outbreak might have been significantly blunted because a smaller cluster of illnesses there preceded a much larger outbreak in Washington. Marler noted that social media makes such evidence even easier to secure nowadays.

7. Do the right thing. During a norovirus outbreak, Texas Roadhouse officials set up a hotline staffed with nurses to take calls from sick patrons. They alerted the media that medical advice was available and were able to dull the negative publicity and assure customers that their well being was front of mind.

“The key is doing the right thing,” Sterling said.