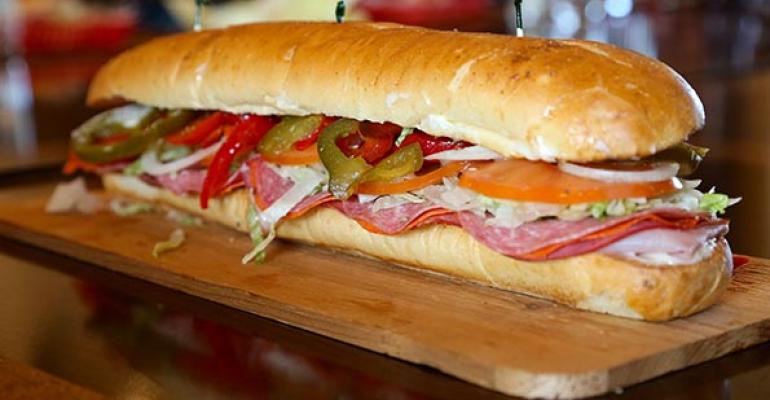 Firehouse Subs, which has 882 units nationwide, is offering the menu of six sandwiches at two company-owned units in its headquarters city of Jacksonville, Fla., and expects to test the new offerings in another 100 restaurants by August, a spokeswoman said. A systemwide rollout is anticipated in 2016.

“We’ve had a couple of cold subs over the years, just small niche items on the menu, but nothing that has provided a lot of appeal or variety for the customers,” Don Fox, Firehouse CEO, told Nation’s Restaurant News.

“One thing that became clear over the last several years is there are many types of occasions that we’re not in a position to satisfy with only hot subs — your classic day at the beach, for example,” Fox said. “That makes up a lot of sandwich occasions. … We want to be in that game and not relinquish it. We see it as a big opportunity.”

Robin Sorensen, co-founder of Firehouse, said the new Cold Deli Heroes menu is a departure for the brand, which was founded in 1994.

“People have known us 20 years for hot subs, so it will take time for them to adjust to the program,” Sorenson said, speculating that customers are getting cold subs from other venues, such as Publix grocery in the South. “We want to get that business,” he added.

“I think some of our customers may trade, but I think they’ll realize they can use them for other occasions,” he said.

Fox said the new offerings will also help the company “ramp up” its catering sales.

For the first time, Firehouse brought in outside consultants to help develop the menu, Sorensen said.

“The idea was to bring in somebody who could bring in new ideas,” he said.

“Robin came out, met with our team and mapped a wide range of restaurants in California and Pennsylvania,” Small recalled. “For three intense days, we ate in 52 restaurants. The idea was to look at what was unique in sandwiches and why they were special.”

After research in Florida as well, the team came up with a new bread formula for the cold sandwiches.

“I always say, when it comes to sandwiches, it’s all about the bread and spread,” Small said. “Obviously, you have high quality meats and cheeses to support it.”

The cold-hero sandwich bread is longer than for the hot subs — 14 inches versus 12 inches — and seasoned differently from the traditional bread. The bread is also toasted before the sandwiches are made.

“It livens the flavor up, and it also provides a barrier so the sandwich doesn’t get soggy,” Small said.

Sorensen said the new cold-sandwich recipes allowed the company to offer its most popular sandwich, the Hook & Ladder, as a catering item.

“If it were a perfect world, I’d like everyone to come into a Firehouse and eat a hot sub. That’s what we’d love,” Sorensen said. “There is a distinctive difference between a hot sub and a cold sub.”

Firehouse Subs has restaurants in 43 states and Puerto Rico.