The four restaurant inductees represent a fine-dining segment in the United States that has changed radically over the years, from obligatory white tablecloths to venues for entertainment and culinary discovery.

Every year the editorial team of Nation’s Restaurant News takes a moment to look at the high end of the restaurant industry and honor those who have contributed consistently to the notion of dining as an art form.

This year we’re inducting four restaurants into our Fine Dining Hall of Fame: Hot and Hot Fish Club in Birmingham, Ala.; Incanto in San Francisco; Jasper’s in Kansas City, Mo; and Momofuku Ko in New York City. We also are naming Boston chef and restaurateur Lydia Shire as our Fine Dining Legend.

Fine Dining in the United States has changed radically over the years, from obligatory white tablecloths and mostly stern waiters serving mostly French food, to venues for entertainment and culinary discovery.

At Incanto, chef Chris Cosentino spearheaded the celebration of organ meats and continues to push boundaries both in exploration of offal and in delving deeply into the many facets of Italian cooking.

Jasper’s is more of a traditional venue that has succeeded for decades with the tried-and-true recipe of classic dishes and great service.

Momofuku Ko helped introduce a new sort of fine dining — the intimate kitchen counter, in which a few guests sit around an open kitchen and marvel at the chefs’ daily creations.

At Hot and Hot Fish Club, Chris Hastings was a pioneer at elevating Southern cuisine and continues to create great memories for his guests every day. 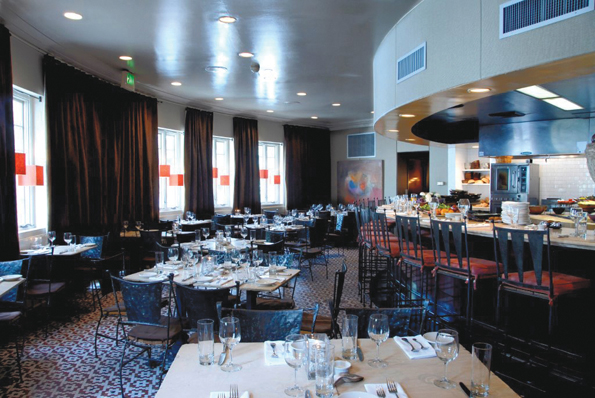 “Chef/co-owner Chris Hastings has a passion for transforming the freshest and tastiest morsels that show up at the kitchen door,” Gayot writes of this Birmingham, Ala., institution, where many of the city’s chefs got their start.

For years, a down-home sensibility with an obsession for quality and seasonality was the backbone of Hastings’ concept. But amid the hoopla, Hot and Hot has in some ways become Haute and Haute,” wrote Eric Velasco in the Birmingham News, observing high-end versions of low-brow dishes, such as “pork and beans” made with white beans and greens in ham hock broth with roasted pork loin and cornbread sticks; as well as thinly-coated batter-fried okra with chive aïoli. 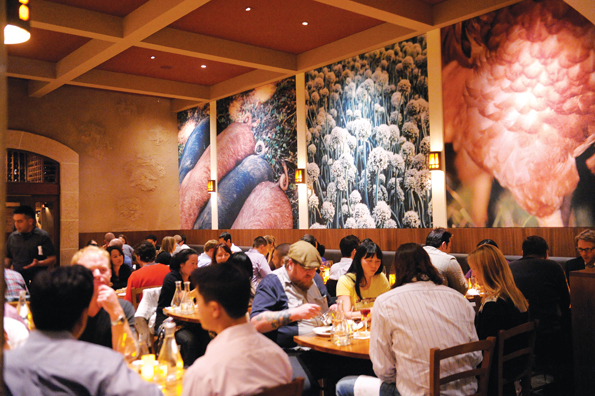 Chef Chris Cosentino broke new ground when he opened this restaurant with Mark Pastore in 2002, bringing kidneys, tripe and other offal into the limelight in a rustic but elegant setting with top-shelf service.

“Incanto is not merely riding the crest of the offal wave; it helped generate this wave,” wrote Jennifer Graue of the San Jose Mercury News in a recent review.

Incanto also has introduced San Franciscans to lesser known vegetables, such as cardoons and chicory, as well as unique service flourishes, such as writing the type of wine ordered by the glass on a paper disk attached to the glass — allowing both servers and customers to remember what’s in there. 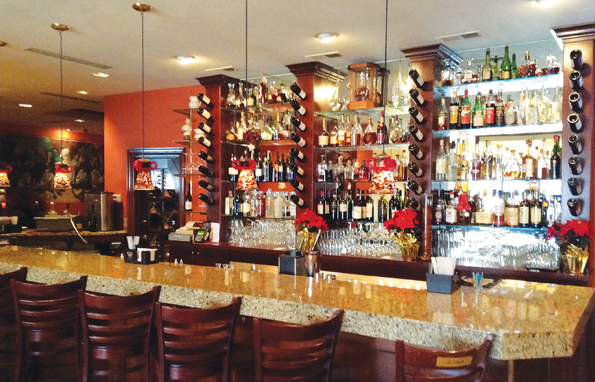 Since opening nearly 60 years ago with a 79-cent three-course meal, Jasper’s has been delighting customers with the Mirabile family’s classic Italian recipes. The service has become more polished, including mozzarella made tableside, the prices have gone up and the restaurant changed locations in 1998, but it still attracts a loyal following, including the celebrity crowd.

Kansas City native and movie star Paul Rudd recently was featured in People magazine praising Jasper’s Chicken Parmesan after having a holiday dinner there. “I’ve been going [there] most of my life,” he told People. “It was delicious and I was with my mom and my sister and brother-in-law.”

Eric Stonestreet of ABC TV’s “Modern Family” annually tweets his love for Jasper’s as serving “some of the best Italian food I have ever eaten,” People reported. 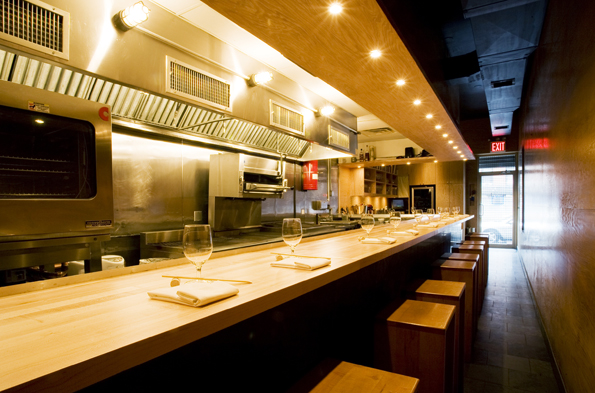 David Chang pioneered the super-high-end kitchen counter that has become the format of a growing number of fine-dining restaurants.

“The restaurant is noteworthy for the intense, revelatory pleasures of its partly Asian, partly French, wholly inventive food,” wrote Frank Bruni of The New York Times. “For a reasonable sum you get a number and caliber of dishes — including a wacky and wonderful blizzard of cold foie gras flakes and a cheeky panna cotta whose sweet, milky flavor mimics the sublime dregs of a bowl of cereal — that might cost twice as much in a more formal environment.”

With just 12 seats, 10 seatings a week and a first-come, first-served, online-only reservation system that has kept would-be customers glued to their computer screens hitting the refresh button, Momofuku Ko remains one of the hottest tickets on the trend-focused, rapidly changing New York City landscape.

•    Fluke with buttermilk, soy, and poppy seeds: Thinly sliced fluke over a buttermilk dressing and garnished with shiro shoyu vinaigrette, poppy seeds, chive batons and a pinch of Maldon salt.
•    Soft-cooked hen egg with caviar, onions and potato: A soft-cooked hen egg served on top of an onion soubise, fingerling potato chips and a fine herb salad. The egg is split open and caviar is settled into the yolk. A splash of sweet potato vinegar garnishes the onion soubise. Finally, the dish is garnished with smoked salt.
•    Shaved Foie Gras with lychee and pine nut brittle: Lychees, quartered and drained, are placed at the bottom of the bowl. The lychees are topped with a Riesling gelée and pieces of pine nut brittle. Using a Microplane, a mound of frozen foie gras is shaved over the top.

“Every chef in the world has a secret ingredient, and I’m convinced that Lydia’s secret ingredient is L. O. V. E.,” said Patrick Lyons, chief executive of the Lyons Group, which co-owns Scampo restaurant in Boston’s Liberty Hotel with Lydia Shire.

Scampo is merely the latest in an illustrious line of restaurants that have benefitted from Shire’s culinary finesse, infectious joie de vivre and tireless perfectionism.

“I remember when we opened the Bostonian Hotel [in 1982], we worked together through the night, completing our 30-hour shift the next evening after our grand opening party,” said Jasper White.

“She’s one wild woman,” Lyons added. “Whether she’s writing a menu, or sourcing, and when she packages [concepts] together for her clients, she puts enormous, enormous, enormous amounts of love in everything she does.”

A native of Brookline, Mass., Shire has spent most of her career in the Boston area. Her first job was as the “salad girl” at Maison Robert in Boston, where she sliced pâté and opened oysters. After attending the Cordon Bleu Cooking School in London, she returned to Maison Robert as a cook, and three years later, in 1974, she became the landmark restaurant’s head chef.

From there she worked at Harvest in Cambridge, Mass., and at the Biltmore in Providence, R.I., where she first met White.

“Lydia was the chef at the signature restaurant,” White recalled. “We hit it off — we recognized that our cooking styles and sensibilities were similar.”

Shire got White a job at The Copley Plaza Hotel in Boston, which was under the same management as The Biltmore, and Shire came to the Copley Plaza six months later as chef of Café Plaza. White said the two then worked together at Parker’s at the Parker House, and the next year they opened the Bostonian.

When White went on to open his first restaurant in 1983, Jasper’s, Shire became the first woman executive chef of a Boston Hotel, he said. “That’s the last time we worked together,” White said. “But 30 years later we are still best of friends.”

After White left, other chefs that would go on to be culinary stars worked under Shire at Seasons, according to Joanne Callahan, who was the Bostonian’s publicist and remains close friends with Shire. “Gordon Hammersly and Jody Adams cane and worked for her,” she pointed out.

After a brief stint in southern California in 1986, Shire returned to Boston and opened Biba — which stood for “Back in Boston Again” — and gained a loyal clientele who followed her to her subsequent restaurants, such as Pignoli.

“Her guests would trust her and her elaborate use of unique and adventurous ingredients,” recalled Dante de Magistris, chef of Restaurant Dante in Cambridge, Mass., who worked as a sous chef for Shire at Pignoli. “She did this before the Food Network and all the food education that we have today. If that doesn’t make her a pioneer, I don’t know what does.”

Lyons added that Shire’s rise to fame has not compromised her standards. “She’s different from many chefs in that she really puts herself on the plate, all the time.” Lyons said. “She’s not your conventional celebrity super star chef. She’s a wonderful raven-haired beauty. She’s larger than life. She’s one of a kind, and her way of doing things is unique.”