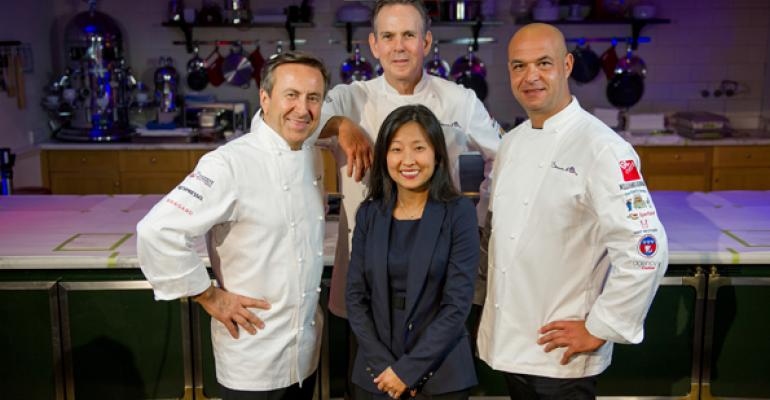 Top chefs who established a foundation to improve the United States’ prospects in the biennial Bocuse d’Or global culinary competition have expanded their mission to foster fine dining excellence nationwide.

Jérôme Bocuse, Thomas Keller and Daniel Boulud have renamed their Bocuse d’Or USA Foundation the ment’or BKB Foundation, and will formalize a grant program for continuing culinary education, the chefs said Thursday. The foundation was established in 2008 to select, fund and support competitors in the Bocuse d’Or culinary Olympiad in Lyon, France.

“The tenet of mentorship is deeply ingrained in the culture of our profession. We have a responsibility to share our knowledge with young chefs and culinary professionals, ensuring that we continue to hold ourselves to the highest of standards and preserve the foundation of classic cuisine in America,” said Keller, one of America’s most decorated chefs, in a press release.

“The change of name from The Bocuse d’Or USA Foundation to ment’or BKB Foundation signifies our big-picture mission to support aspiring young culinary professionals in America,” said Boulud, head of the New York-based Dinex Group and a Lyon native, who was himself mentored by Paul Bocuse, Jérôme’s father. “Our goal is to create opportunities for young talent to pursue their ambitions through continuing education. In addition to supporting Team USA’s representation at the biennial Bocuse d’Or competition, ment’or will provide a range of grants and programming through public and private support.”

Paul Bocuse is an icon in the culinary world. He was one of the trailblazers of nouvelle cuisine in the 1960s, and the chef who established the Bocuse d’Or competition. Jérôme Bocuse is the third founder of the new organization.

“For me the foundation has always been about inspiring the younger generation of culinary talent to be recognized for his or her consummate skills,” Jérôme Bocuse said. “We hope our programs will help engage and motivate even more young individuals to become part of this rewarding culinary profession that Thomas, Daniel and I are honored to be a part of.”

The three chefs have brought on Chris Hastings, chef-owner of Hot and Hot Fish Club in Birmingham, Ala., to spearhead the foundation’s grants program for continuing education. He and executive director Young Yun will start accepting applications this summer for internships with members of the foundation’s culinary council, which counts among its members several dozen of the country’s top chefs, including Grant Achatz, José Andrés, John Besh, Tom Colicchio, Traci des Jardins and Barbara Lynch.

This fall, the foundation plans to hold the first in a series of Young Chef Competitions. It plans to hold four such cooking competitions in different parts of the country over the course of the year. First- and second-place winners will receive $15,000 and $10,000, respectively, towards their culinary education.

The ment’or BKB Foundation will also continue to select and train the U.S. team to compete in the Bocuse d’Or, which will be held in 2015. The members of that team, Philip Tessier and Skylar Stover, both of The French Laundry, were selected earlier this year.