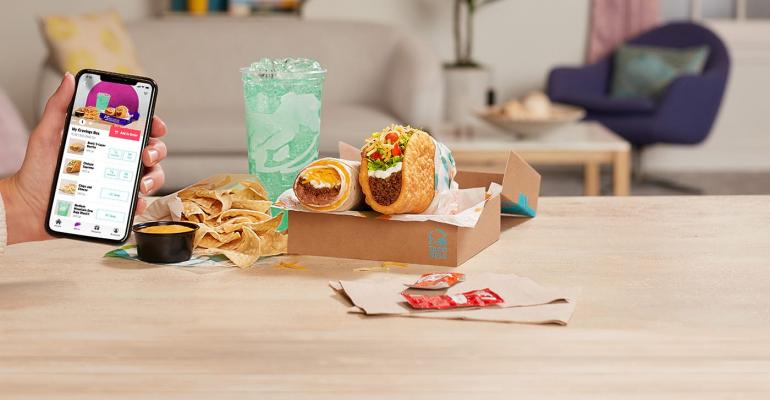 Taco Bell
Taco Bell is celebrating the first anniversary of its Rewards program with the offer of winning free tacos for a year.
Finance

Same-store sales grew 4% on a two-year basis for Yum Brands Inc., despite about 1% of stores, or about 700 units, still temporarily closed at the end of the second quarter, the company said Thursday.

Across all four brands — KFC, Pizza Hut, Taco Bell and Habit Burger Grill — two-year comparable sales were positive, and improved over the first quarter, which CEO David Gibbs attributed to the brands’ adaptability in an ever-changing environment. Taco Bell took the lead with a two-year comparable store increase of 12%.

Reopenings and COVID vaccination rates contributed to the company’s recovery, he said, as well as investments in technology to make the restaurant experience more seamless. For the June 30-ended quarter, Yum Brands saw a record $5 billion in digital sales, a 35% increase over the prior year.

“For the first time on a trailing 12-month basis, Yum Brands delivered more than $20 billion in digital sales,” Gibbs said, which he described as highly incremental, enabling restaurant team members to offer a better customer experience.

The recovery has not been consistent country-to-country nor linear, he noted.

In the U.S., Gibbs credited KFC’s strong group occasion business, as well as new digital capabilities resulting from upgrades to the website and app that replaced a third-party solution. As a result, he expects digital sales this year to soon surpass all of last year.

Gibbs credited the strong menu lineup including Stuffed Crust Pizza and the return of The Edge pizza during the quarter. Pizza Hut also increased customer satisfaction metrics with the launch in late 2020 of the HutBot, an in-house intelligence coaching app to ease daily store management that is now in about 4,000 stores in 40 markets.

The 12% two-year comp growth at Taco Bell had a lot to do with the Build Your Own Cravings Box and the relaunch of Naked Chicken during the quarter. But Gibbs also spotlighted the year-old Taco Bell Rewards program, which has increased app sales by 90%.

To celebrate its one-year anniversary, Taco Bell on Thursday launched an opportunity for Rewards members to earn free tacos for a year by scanning a barcode on their receipt through the app. Winners will be randomly chosen by Aug. 18.

Gibbs said the Rewards program has resulted in an uptick in frequency and higher spend. Active loyalty members have increased their spending by 35% compared with their pre-loyalty behavior.

Habit Burger’s two-year same-store sales increased 7% in part on the strength of the new Brunch Charburger topped with tater tots and a fried egg, as well sales and technology investments to make stores easier to operate.

Yum Brands has been investing deeply in technology, including the acquisition of Kvantum and TicTuk and the more recent purchase of Dragontail Systems Limited, which is expected to close later this year.

During the quarter, the Louisville, Ky.-based company recorded record-setting net unit growth of 603 new restaurants for a total of more than 51,000, growing its global footprint. The company revised its long-term growth guidance, saying it expects between 4% to 5% unit growth — up from earlier projections of 4%.