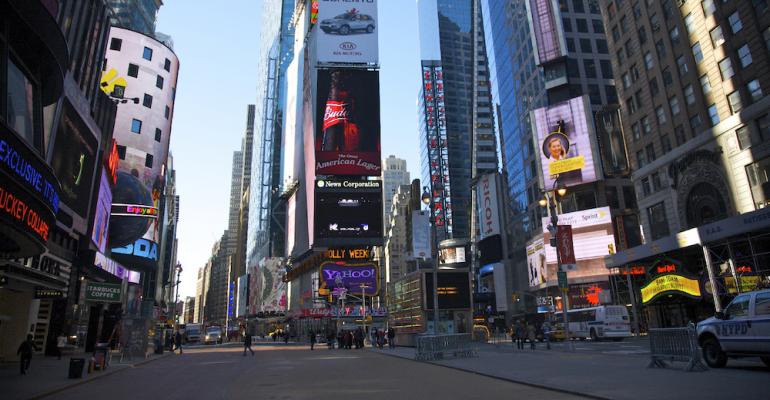 Demonstration to ask for assistance for restaurants and other small businesses

A business coalition led by the lawyers who are suing Thomas Keller’s insurance agency are staging a demonstration Wednesday night in New York City’s Times Square, shutting off electronic billboards for one minute to draw attention to the group’s request for federal assistance to businesses and organizations that have suffered financial loss as a result of the COVID-19 pandemic.

The Business Interruption Group, founded by John Houghtaling of the law firm Gauthier Murphy & Houghtaling LLC, was established to pressure insurance companies into paying business interruption claims to restaurants that did not have explicit virus exclusions in their policies. The Times Square demonstration it has organized, apart from requesting more federal aid, is also intended to highlight the need for “fairness from insurance companies,” according to a release from BIG.

Although most business interruption insurance policies do not cover viral outbreaks — specific exclusions were written into most policies following the SARS and avian influenza outbreaks in the early 2000s — Keller and some other operators with high-cost policies did not have virus exclusions in their policies, but were denied anyway.

The “dark-out” is intended to draw attention to the hundreds of thousands of restaurants, retailers and non-profit organizations in danger of going dark permanently because of inadequate federal assistance, BIG said.

Related: Here’s what your restaurant business insurance may (or may not) cover during the coronavirus pandemic

BIG now includes the Times Square Alliance and the New York Hospitality Alliance, who are joining with select Times Square billboard companies to shut off more than a million LED pixels between 46th and 48th streets in Times Square. Each pixel represents $1,000 in economic impact from Times Square alone, BIG said.

“In both the media and our public consciousness, an empty Times Square has become emblematic for how swiftly and severely the social, cultural, and commercial activity of not only our city, but also the main streets across this country have ground to a halt amidst this global pandemic,” Times Square Alliance president Tim Tompkins said in a statement. “Similarly, the images Times Square sends around the world send signals of what could come next — for better or for worse. It is no secret that this pandemic has created unprecedented vulnerabilities for restaurants, retailers and small business entrepreneurs, deepening existing inequities not only in New York but across the country. The black-out action is both a caution and a call to action to ensure that steps are taken to ensure that the lights don’t go dark for millions.”

Since Broadway theaters near Times Square are closed, as are restaurants and shops, it’s not likely that many people will witness the one-minute demonstration, however following the dark-out the organizers will release a video urging insurers to honor business interruption claims and support federal assistance.

Representatives of the insurance industry have said that pandemics are essentially uninsurable. A white paper released Wednesday by the American Property Casualty Insurance Association said the losses from such global disasters exceed insurance companies’ ability to pay.

It added that such business interruption coverage would always “require widespread government protection, which could, in turn, encourage increased innovation of specialized products by private insurers and reinsurers.”

When Houghtaling founded BIG, he said he would support the insurance industry in lobbying for a federal bailout.

The video will feature Eric Ripert, chef and owner of fine-dining restaurant Le Bernardin in New York City, as well as Whoopi Goldberg and other entertainers, and Rabbi Marvin Hier of the human rights group Simon Wiesenthal Center, which is also part of BIG.

The Independent Restaurant Coalition and the National Independent Venue Association also are members.