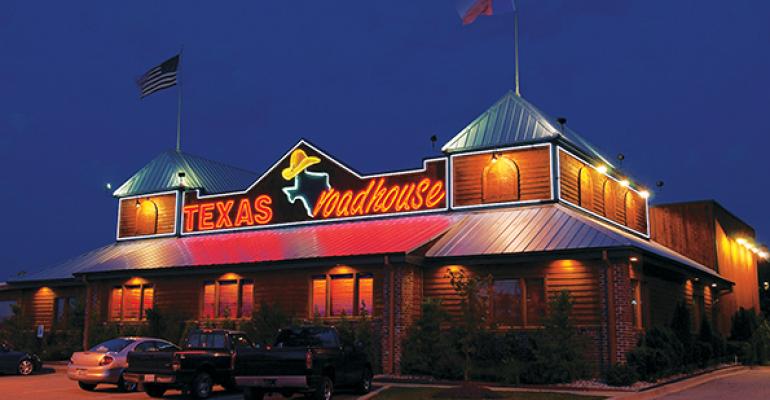 Texas Roadhouse Inc. expects its food costs to fall 1 percent to 2 percent this year, due to improving beef costs.

That coupled with continued strong sales at the Louisville, Ky.-based casual-dining chain could make this a more profitable year, company executives said in an earnings call Monday.

The higher sales and the prospect for lower food costs sent Texas Roadhouse’s stock skyward. It was up 11 percent as of early afternoon, on a day when the broader market is down about 1 percent.

Beef costs have been high for years, reaching record highs in 2014 and largely maintaining those levels in 2015. SpenDifference, a Denver-based food buying cooperative, expects beef costs to fall 10 percent to 17 percent.

The lower beef costs, coupled with roughly flat or perhaps declining costs for most other commodities, are expected to be a boon for beef-focused chains that have been waiting years for that improvement.

Yet it’s also expected to increase competition in the casual-dining sector as more companies start promoting steak and hamburger deals.

In that sense, Texas Roadhouse’s comments on the first quarter of 2016 might have assuaged some investors’ concerns that the chain could lose some business with that intensified competition.

Executives also appeared to assuage some concern about labor costs. Texas Roadhouse is experiencing wage rate inflation of 2.9 percent, company executives said on the earnings call. Labor costs in the fourth quarter rose slightly because of the higher wages and higher turnover. But the company offset those increases with higher unit volumes at its restaurants.

Tonya Robinson, senior director of financial reporting for the 474-unit chain, said that turnover was slightly higher last year. “I think it’s just an indication of the overall job market, and unemployment being low,” she said. “We’re hearing from our operators that it’s tougher to hire people. They are paying a little bit more.”

Higher labor costs are expected to be a bigger issue for many restaurant chains, thanks to the minimum wage and fewer available workers. In addition, restaurant companies have expanded at a rapid clip, adding more than 46,000 employees in January alone.

But higher sales, at least for now, appear to be offsetting those higher labor costs. And this year, lower food costs appear to be more than making up for any increase in labor.

Colosi said that it’s “too early to talk about specific results at our existing locations,” but that executives “are confident in where we are headed with Bubba’s 33.”

Kent Taylor, Texas Roadhouse founder and CEO, said on the call that the company so far has concentrated on ensuring that Bubba’s doesn’t take sales away from Texas Roadhouse. So the early restaurants were actually built near that chain’s units — and the Texas Roadhouse locations showed little impact on sales.

The chains have very different menus, but executives said that the rate of cannibalization between the two concepts was less than they expected.

“We just find that when we go to the markets where Texas Roadhouse tends to do better than average, we find that we get a nice sales out of the Bubba’s,” Taylor said. “That’s pretty much it. It’s not rocket science.”

Texas Roadhouse expects to open 30 new units this year, a rate Taylor says enables the company to do a better job training employees for those locations.

“We like to get the best people to open units trained correctly,” Taylor said. “This way we’re able to be a little bit tougher on the selection of people and not just open stores to open stores.”