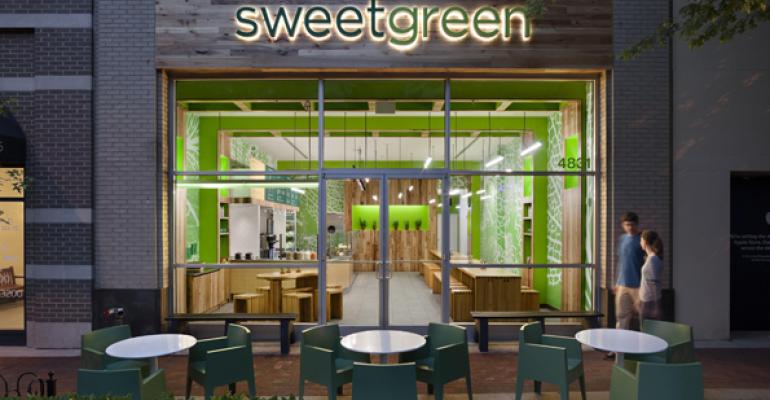 The fast-casual salad chain Sweetgreen announced on Wednesday a $22 million investment from Revolution Growth, a venture capital firm founded by Steve Case, the co-founder of AOL.

Nicolas Jammet, one of three co-founders and co-chief executives of the 22-unit Sweetgreen, said it was the company’s first influx of institutional capital and will help fund the farm-to-table concept’s ongoing growth. Jammet is CEO along with Jonathan Neman and Nathaniel Ru.

Case, in a statement, said Revolution was attracted by Sweetgreen’s break-the-mold approach to fast food as a “brand that stands for healthier choices.”

“Leveraging social marketing, local sourcing and community building, Sweetgreen truly understands the power of thinking globally and acting locally to change the way business is done,” he said. “The company’s trajectory is proof that innovative, high-growth companies aren’t limited to the traditional tech and internet sector, and can be created anywhere in the United States.”

Jammet said Revolution was the first investment firm that the founders felt would be in line with their vision for the brand.

Eighteen of the restaurants are in the greater Washington area, but the chain now has locations in Philadelphia, Boston and New York, and a goal is to continue to build out those markets, according to Jammet.

In 2014, the company plans to add six to nine more restaurants, though only the next three locations have been revealed: Tribeca in New York City; Center City in Philadelphia; and the Yards in Washington.

In addition to growth, the funding will help support expansion of other Sweetgreen initiatives, including a school program that helps encourage children to eat and live healthfully. The chain has the program running in Washington-area schools, and Jammet said they are looking for schools in Boston and New York.

“We teach the basics of living well and basic nutrition, from seasonality to being active,” said Jammet.

Founded in Washington in 2007 by three Georgetown University graduates, Sweetgreen is a concept designed to offer “healthful, quick, affordable food that is either locally sourced or transparent” about where ingredients come from, said Jammet.

With about a $10 to $12 check average, the restaurants feature salads and grain dishes, as well as yogurt and fresh juices in some units, along with housemade lemonades and teas.

The chain is also known for hosting an annual Sweetlife festival in Washington in the spring, featuring food and live music and showcasing local purveyors and farmers.

“We call it a party with a purpose,” said Jammet.

The brand also taps increasingly popular technologies, including mobile payment, as well as offering an app for guests to earn dollars that can be redeemed at the restaurants or spent to support local charities that promote healthful eating in schools.

Sweetgreen also launched a Passport program this year that gives newsletter subscribers access to free fitness classes — like yoga or Pilates — throughout their communities.

The program drives traffic, but also is a community-building effort that connects the chain’s like-minded customers, who are probably already active and conscious about keeping fit, said Jammet.

The challenge for a concept like Sweetgreen is building economies of scale for a chain that relies on local purveyors and farmers within different regions.

“It’s harder and it takes more money,” said Jammet, but it can be done, especially as the company leverages its long-term partnerships with suppliers in each market.

Unlike larger chains that are trying to shift from conventional suppliers to more local sources, Sweetgreen has the advantage of building its mostly local model from Day One.