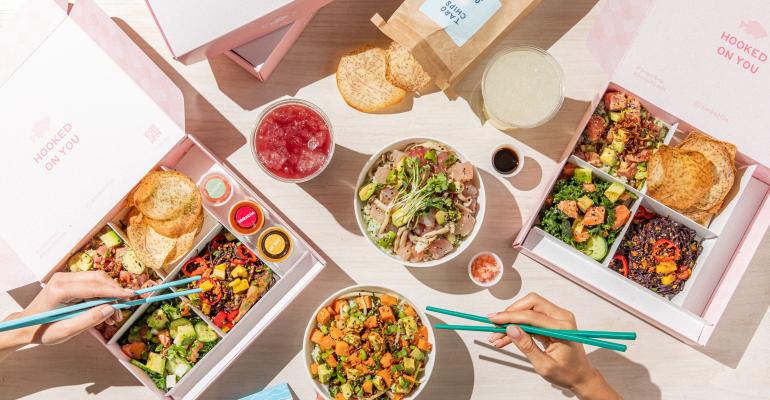 Sweetfin
The poke concept plans to accelerate growth in Southern California and in new markets.
Finance

Plan is to grow California-based brand in the U.S. and build on digital prowess

The poke concept Sweetfin on Tuesday announced a strategic investment that will help the 14-unit chain triple in size and will give U.S. entry to the operator of a much larger fast-casual brand from Europe.

Poke House, an Italy-based brand with more than 75 units across Europe, has become the largest minority investor in Santa Monica, Calif.-based Sweetfin. Terms were not disclosed but Sweetfin president and co-founder Seth Cohen said the partnership will accelerate the U.S. brand’s growth and potentially open doors down the road for international expansion.

Poke House, a fast-casual brand operating in Italy, France, Portugal, Spain and the United Kingdom, was co-founded by tech entrepreneur Matteo Pichi, who grew the brand to more than 70 units in just three years. It’s described as a hybrid retail-digital concept with a proprietary CRM platform, a strong loyalty program and data-driven analytics. According to press materials, Poke House finished 2021 with more than $50 million in annual revenues.

“We are thrilled to enter the American market in partnership with an iconic and beloved brand that has made California-inspired poke a true institution,” said Pichi in a statement. “We’re proud and enthusiastic to have arrived, through this investment, to enter the most important food retail and delivery market in the Western world.”

Cohen said there are no plans to open Poke House restaurants in the U.S., but rather to speed growth of Sweetfin, which currently operates in Southern California but is looking at Scottsdale, Ariz., Dallas and Houston.

The goal is to triple Sweetfin’s unit count and bring the fast-casual brand to new territories. Sweetfin is looking to add more company-owned brick-and-mortar restaurants, and also expand delivery reach with ghost kitchens, said Cohen.
“We’re not going to enter a market with cloud kitchens, but we will use them to supplement our footprint,” said Cohen.

With the partnership, Cohen said Sweetfin will be able to build on its digital growth. More than 80% of Sweetfin orders come through the chain’s app, website or delivery partners. Sweetfin also launched a loyalty program that has grown 540% over the past year.

In addition, Cohen said Sweetfin has also been testing digital kiosk ordering at one unit — with facial recognition capability — and the company plans to roll out kiosk ordering systemwide.

Because of the pandemic and staffing challenges, some locations in Los Angeles have kept dining rooms closed, relying on takeout, delivery and outdoor dining only, Cohen said.

Founded in 2015 by Cohen along with partners Alan Nathan and Brett Nestadt, Sweetfin was named an NRN Breakout Brand in 2016.