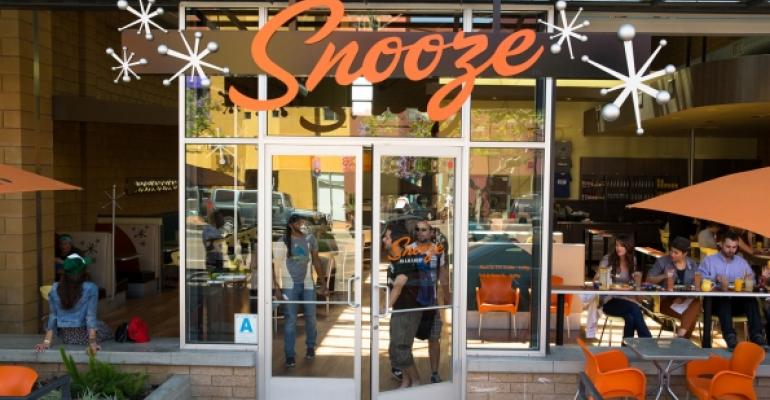 <p>Stripes Group&#39;s investment in Snooze, an A.M. Eatery, will allow the chain to expand.</p>
Finance

Snooze gets a big-name investment

Stripes Group, a New York-based private-equity firm known for its investment in Internet-based companies, on Monday announced it has bought a piece of Denver-based breakfast chain Snooze, an A.M. Eatery.

Terms of the deal were not disclosed, but Stripes bought out previous investor Weston Presidio and the investment will enable the 17-unit chain to expand.

The investment “gives us a long-term strategic partner,” David Birzon, CEO of the chain, told NRN.

“We have the capital to grow. We’ve partnered with an investment group that is lined up with our values, and has a lot of experience in consumer brands that can add a lot of value. We’re thrilled.”

As part of the deal, Snooze will get access to restaurant and financial veterans who will take places on an already stacked board of directors. David Swinghamer, an operating partner with Stripes who has been involved with Shake Shack Inc. and Lettuce Entertain You Enterprises in the past, will take a spot on the Snooze board.

“Snooze has rewritten the book on breakfast dining,” Swinghamer said in a statement “By focusing on culinary excellence and creating an upbeat, hospitality driven environment, Snooze has become one of the most exciting emerging restaurant brands in the country.” Snooze sets itself apart from other family-dining restaurants with a full bar.

Ken Fox, managing partner with Stripes Group, and Karen Kenworthy, a partner at the firm, will also be joining the board. As it is, the company counts among its advisors former BJ’s Restaurants CEO Jerry Deitchle, restaurant industry dealmaker Mark Saltzgaber and Elliot Group founder Alice Elliot.

“It’s really an all-star team,” Birzon said. “For me as CEO it’s wonderful. Who wouldn’t want that?”

Jon and Adam Schlegel founded Snooze in 2006. The chain is opened for breakfast and lunch, and is known for its colorful atmosphere, circular booths, rollaway garage doors and expansive outdoor eating areas. The company recycles or composts 90 percent of its waste and donates 1 percent of revenues into communities. The company calls its employees “Snoozers.”

Locations are open only eight hours and yet the chain boasts unit volumes of $2.9 million, much stronger than most other family-dining restaurants that are usually open for much longer. The chain’s existing locations have worked in “every type of real estate,” Birzon said.

Its key differentiator is a full bar, something that weekend brunch diners love along with customers eating a meal after working an overnight shift.

The company’s unit volumes are on par with casual-dining concepts, which also offer full bars.

“It puts us in a different level of economics from the way people perceive us,” Birzon said. “Even on weekdays when we may not sell a ton of alcohol, the bar brings energy.”

In Stripes, Snooze is getting a partner that has made a name for itself investing in food and technology companies. Previous investments have included Blue Apron, GrubHub, pet food company Stella & Chewy’s and packaged goods company Califia Farms.

“The Snooze team has built a culture, menu, and restaurant experience that uniquely meets consumers’ insatiable demand for great food made with ingredients we can all understand,” Fox said in a statement.

Weston Presidio invested in the chain in 2012, when Birzon arrived and the concept had six locations. “We’ve spent the last four years building an infrastructure upon which to grow,” he said. The company is planning eight new locations in 2017 and another 11 in 2018.

“We’re proud of the entire Snooze team for all they have accomplished and are delighted they have found a new, world-class partner to continue to support their growth,” Jeff Mills, managing partner with Main Post Partners and partner with Weston Presidio, said in a statement.