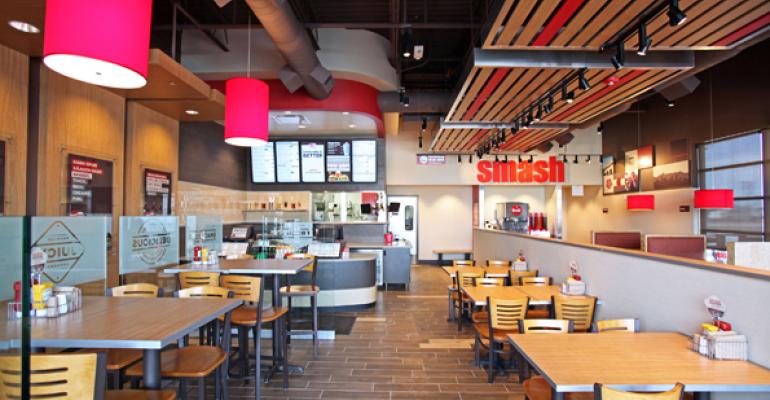 Smashburger CEO: IPO may still be on horizon

The new round of financing secured with Golub Capital this week will fund ongoing growth, according to Prokupek.

Smashburger said Monday it has closed on a $35 million round of financing with Golub Capital to fund ongoing growth, dashing hopes that the fast-casual burger chain would go public this year.

However, Dave Prokupek, Smashburger’s chair and chief executive, said an initial public offering may still be on the horizon for the Denver-based chain, which is owned by private-equity firm Consumer Capital Partners.

Charles Riceman, managing director at New York-based Golub Capital, said he believes Smashburger is positioned to become the industry leader in the better-burger category and in the fast-casual sector overall.

“We were impressed with Smashburger’s industry-leading franchisees, as well as the company’s execution on its business goals to date, and we look forward to being a part of the company’s success going forward,” he said in a statement.

Prokupek spoke with Nation’s Restaurant News on Monday about the deal and growth plans ahead.

Why take this financing step now?

We’ve been all-equity financed to date. We’ve put just under about $50 million in since we started in 2007, and we decided to take advantage of getting some debt capital into the business.

$35 million is a modest facility, basically to give us some additional capital to continue on, especially with our corporate growth strategy. We’re about 50/50 corporate-to-franchise now. So we will open 20 to 25 corporate restaurants this year and another 40 or so franchise restaurants. We’re upping that next year and will probably target 30-plus corporate restaurants in 2014, making sure we’ve got the flexibility to keep growing.

Are you targeting specific markets for corporate growth?

Our development strategy for corporate growth is in the top 10 DMAs, plus some of our existing markets, like Denver. So we’re expanding in Dallas, Los Angeles, San Francisco, Miami, Chicago and Denver, as well as up in Canada, in Calgary and Edmonton. For the most part some of the larger markets in U.S. are where we’re expanding corporately.

You’ve been quoted as saying fast-casual chains will be more likely to go public once they hit 300-400 units. Is that a goal for Smashburger?

Being public is still certainly an option for Smashburger down the road. I never really put any size on it. But you’ve got Noodles and Company [which is expected to begin trading on the Nasdaq Friday] at between 300 and 400 units. There’s a certain size in the business that makes sense.

Being public is still on the radar. We’re giving ourselves enough capital to finance ourselves in multiple ways; this is one of those ways. But we’re not planning on going public this year.

You’ve been talking a lot about brand awareness lately. How does that factor in to your growth plans?

We’ve been very active in social media strategies from day one, along with PR and local marketing strategies. About 18 months ago, we started getting more actively involved in more broad-based strategies, particularly radio, which has been very successful for us. We’re probably in 20 to 25 markets right now where we’re using radio very effectively.

We’re now in four or five markets testing TV. We’re only in our fourth week, so it’s very early on, but what’s clear is that building our brand awareness, and kind of turning the lights on for consumers about what Smashburger is, has been valuable. Both radio and early TV results are very encouraging in that regard. The basic messaging is: smashing makes a better burger. And the spots are all very brand-building, awareness-building spots, and not promotional in nature.

On the low end we’re probably seeing 5- to 6-percent lifts, and on the high end, 8- to-10-percent-plus in terms of results. So we’re really pleased so far, and we’re going to keep working it.

Will you do more in the way of TV advertising going forward?

We’re definitely investing ahead of the curve. I don’t know that anyone can afford TV at our size. What we’re doing is, instead of doing something nationally at a half-baked level, we’re picking two or three markets where we’re going to over-invest to see what those results will be. We’ll keep working in those markets and trying various media buying strategies, awareness strategies and daypart strategies until we really get it right. It will be a tool available to us in a lot of markets over the next couple years.

What’s new on the menu?

This year has been about localization. We’re offering craft beer and burger pairings in about 10 markets at this point, so by the end of the year, we’ll be offering local beer pairings in each of our major markets. That’s playing very, very well.

On the burger side, awareness has focused on the classic burger and what makes smashing better. But a lot has also been around chicken.

We’ve got a big chicken platform, and we’ve been marketing through our loyalty club, and the e-club in stores, our range of chicken products. We’ve probably moved our mix up 5-6 points.

Thriving in a crowded segment

Can you give some detail on average unit volumes?

Our average unit volumes are on the rise. We’ve been about $1 million a year, but this year’s vintage is averaging $1.2 million to $1.3 million, and they’ve been climbing. We’re comping well in the 4-ish-percent range this year. We don’t have any stores losing money, and the brand’s working very broadly across the U.S.

It’s rare to hear about new fast-casual burger concepts opening these days. There’s a lot more activity in other food categories within the segment. Does that indicate a cooling of the once-hot better burger trend?

We just had our sixth anniversary, and our strategy was to get as close as possible in this time frame and to make it less attractive for other people to start and compete with a burger concept. I think there will be two-to-three leaders in fast casual in every food category, whether that’s pizza, Asian, burritos, bakery/café or burgers. There will only be two or three playing at the national level, and then some regional folks.

With what the market structure is, we’re clearly one of the leaders — if not the leader — in fast-casual burgers, and consumers continue to be excited. We’re stealing market share from all the logical suspects. I think as an investor starting up from scratch, when you see where we are and where some other people are, it would be somewhat daunting to do that on any kind of scale. So you’re just seeing the market structure start to play out in burgers. And, from Smashburger’s perspective, it’s good.