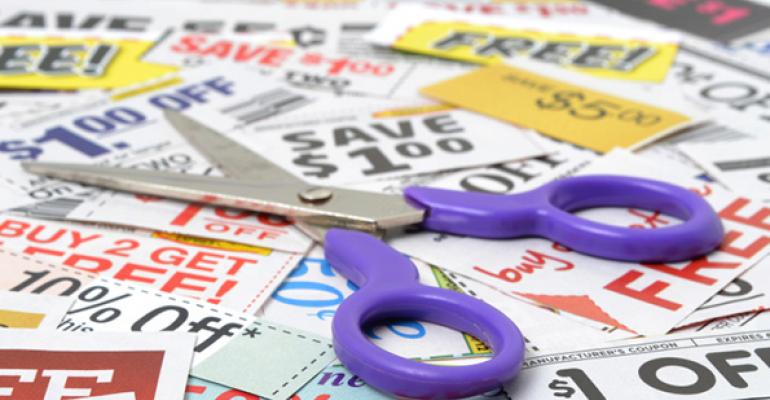 Breaking away from heavy discounting strategies can be difficult for restaurants. Just ask Stoney River Steakhouse.

The 10-unit subsidiary of J. Alexander’s Holdings Inc., which filed documents last month to go public, recently ended its policy of discounts and coupons to lure traffic. The results have been tough: Guest counts this year have fallen 12.8 percent, even as average check rose 13.8 percent, according to SEC filings.

With signs that restaurant sales are finally improving after six long, difficult years, more concepts are ending long-held discounting policies. Yet in doing so, restaurants risk alienating some customers as they try to attract more profitable traffic.

“In my 47 years in the restaurant business, relying on a strategic discounting program has not proven to be a long-term, winning strategy,” Famous Dave’s of America Inc. CEO Ed Rensi said during an earnings call this week, explaining the chain’s 5.7-percent same-store sales decline, which he attributed to the end of Famous Dave’s discounting strategy.

Although unemployment has been mostly declining since hitting 10 percent in October 2009, traffic has remained weak. Over the past two years, monthly restaurant traffic has fallen as much as 6.2 percent, according to Black Box Intelligence. It wasn’t until this month that Black Box’s monthly traffic index turned positive. 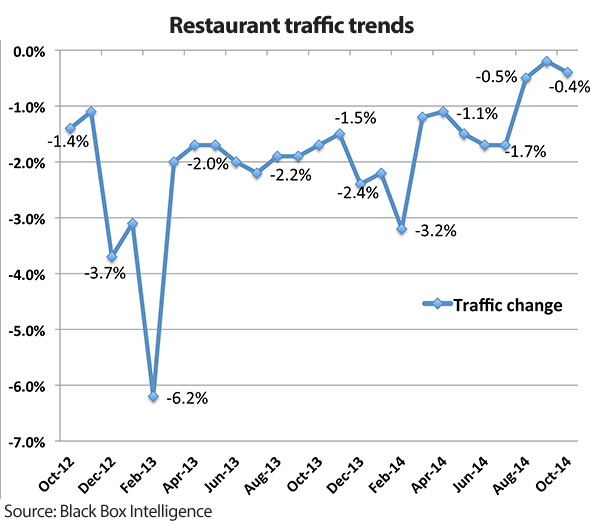 Weak traffic means that restaurants have to fight one another for market share. And while some chains can lure customers by simply opening a door, such as Wingstop, Chipotle or Chick-fil-A, others have to resort to other measures. And one popular way has been through discounts.

“Almost everybody out there is trying to scream value in some fashion,” said Carl Howard, the CEO of Lexington, Ky.-based fast-casual Italian chain Fazoli’s. “There’s multiple ways of doing it. Whether it’s dressed up in an LTO, or a price point hit on a billboard to draw traffic, or the standard coupons.

“I know of chains that have an unbelievable deal rate, where 50 percent of guests have some sort of discount in order to shop there. That is a core consumer trait they’ve ingrained in the behavior of their guest.”

Indeed, many analysts expect restaurants to continue discounting heavily well into the future. Earlier this week, Wendy’s CEO Emil Brolick said that roughly 25 percent of quick-service customers are value seekers. He also noted that growth in the number of value customers has outpaced growth in premium customers over the past 10 quarters.

The problem for chains is that discounts and value customers pressure profits at a time when food costs are rising and labor costs are increasing, due to minimum wage hikes and overall industry pressure.

Moody’s Investors Service recently predicted that operating profit for U.S. restaurants would grow 2 percent to 4 percent over the next 12 to 18 months. But it also noted that discounting and promotions would remain popular because lower-income consumers are still limiting their discretionary spending.

“You want to keep people coming into your store,” said William Fahy, vice president and senior credit officer at Moody’s. “The U.S. is a very mature, highly competitive market. The market itself is not growing. It’s a market share game.”

Once restaurants lose a customer, it’s more challenging and expensive to bring them back, he noted, and one way to accomplish that is by discounting. Indeed, Howard of Fazoli’s said, discounts and coupons have to be part of many chains’ strategies to lure customers.

“Millions of middle-class Americans are getting squeezed by today’s economy,” Howard said. “That mom and dad have to be more frugal. And a coupon may sway them to go to your restaurant.”

Nevertheless, some chains are opting to reduce discounting. Given recent improvements in traffic — which grew 0.4 percent in October, according to Black Box — perhaps now is the time.

Last year, discounts represented 11.9 percent of traffic at Ignite Restaurant Group Inc.-owned Romano’s Macaroni Grill. That fell to 0.9 percent during the third quarter, as the company decided to end experiments with discounts. The result has been tough on the chain’s traffic: Guest counts decreased 13 percent during the third quarter, and same-store sales fell 8.5 percent.

Chains that eliminate discounting altogether have to brace themselves for a long road, said John Gordon, a San Diego-based restaurant consultant. “Re-strategizing takes time,” he said.

And, he added, it’s best if the chain pairs discount reductions with a big promotion of something else, such as menu enhancements.

For example, Orlando, Fla.-based Red Lobster has struggled the past two years with declining sales and traffic, leading parent company Darden Restaurants Inc. to sell the chain to Golden Gate Capital. Subsequently, Red Lobster quickly said it would eliminate deep, promotional discounting that had become common in recent quarters, while keeping popular promotions such as Lobsterfest and Endless Shrimp that are considered “brand builders.”

The chain also introduced a new menu, with more seafood items across a range of price points, and kicked off a national television ad campaign to support the effort.

“You can’t just go cold turkey,” Gordon said. “It has to be part of some other steps.”