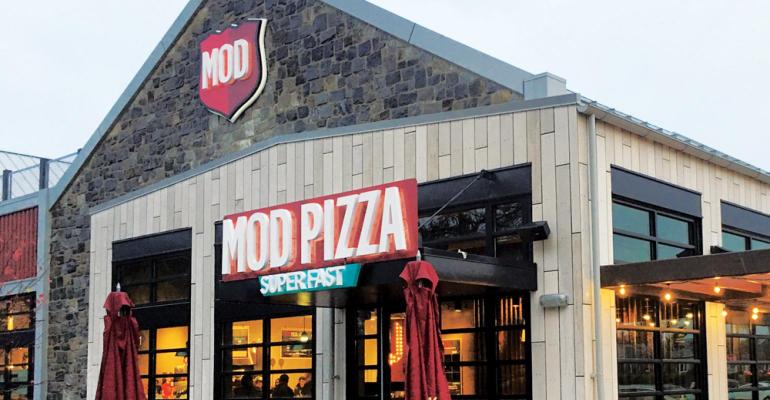 The growth follows a period in which the fast-casual pizza chain was the fastest-growing restaurant chain in the country two-years running, according to Nation’s Restaurant News’ Top 200 research, with year-over-year sales growth of 44.7% growth in 2018 and 80% in 2017.

Co-founder Scott Svenson said MOD Pizza has big plans for further expansion, noting that its slowing growth rate is a reflection of the company’s size, not its potential.

“We are going to continue to grow at a very fast rate but once you get to a certain scale, the percentages come down just because the numbers get larger,” Svenson said.

“We have a very long runway ahead of us,” he added.

The Bellevue, Wash.-based pizza chain opened 64 stores in 2019 to end the year with 468 locations, including one in Langford, British Columbia, in December, its first store outside the U.S.

“[Digital] has gone from being a relatively small part of our business, to being a meaningful and growing part of the business and I really don’t see an end in sight,” Svenson said

Svenson said the company is also doubling down on its focus on employees, a people-first approach that has been part of the company’s mission since Scott Svenson and his wife Ally Svenson co-founded the brand in 2008.

In 2019, the MOD Pizza workforce grew by 25% to total 10,000 employees, 30% to 40% of whom are “impact hires,” or those that might otherwise face barriers to employment, according to Scott Svenson. The company has identified three special interest groups for future hires: the formerly incarcerated, low-income youth ages 16-24 who aren’t employed or in school, and people with intellectual and developmental disabilities.

MOD also wants to “improve the journey for our general managers so they stay with us for a very long time,” said Svenson. “That is our number one priority and that addresses a lot of the other things like operational enhancements as well as social impact.”

Currently, MOD Pizza’s general manager turnover is around 30%, a figure that Svenson would like to get lower.

“How do we make it easier for our teams to execute in this world where a much larger percent of our world is going digital?” Svenson said. “How do we help them make it easier, more efficient, quicker and more enjoyable so that our squads have a better journey?”

In May of 2019, MOD Pizza raised $160 million in equity financing from investment firm Clayton, Dubilier & Rice, which combined with other earlier rounds brought MOD’s total funding to $339 million, according to the company.

At the time of the deal, MOD set a target to open more than 500 restaurants over the next five year, more than doubling its unit count to 1,000 locations.