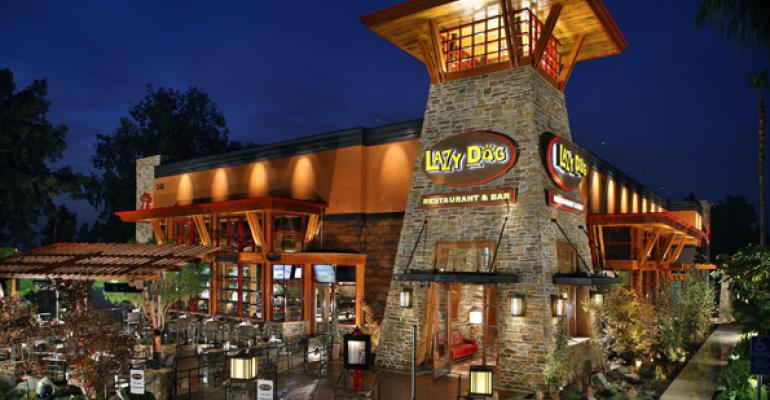 Casual-dining brand aims to accelerate growth with the deal

The Lazy Dog Restaurant & Bar chain has received a significant investment from private-equity firm Brentwood Associates that will fuel an uptick in growth, the casual-dining chain said Monday.

Terms of the investment were not disclosed. Chris Simms, the Huntington Beach, Calif.-based chain’s founder and chief executive, declined to characterize whether the investment involved a majority stake, but he said the existing management team has retained substantial equity.

“We’re both going to have a lot of skin in the game,” said Simms.

A casual-dining concept with mountain-lodge décor, a from-scratch menu and a strong bar business, Lazy Dog will celebrate its 10th anniversary in August. The chain opened its 12th location in June, moving into the San Diego market for the first time.

Simms said it was the right time to bring on a private-equity partner that would allow for an expansion pace that would keep employees motivated and growing, while still allowing the company to retain its commitment to quality.

“And we get to operate without the stress of financing store by store,” said Simms.

Based in Los Angeles, Brentwood Associates is managing more than $850 million in capital and focuses on middle-market growth companies. The firm’s current restaurant investments include Veggie Grill and Zoës Kitchen, both fast-casual chains.

Rahul Aggarwal, managing director at Brentwood, said in a statement that Lazy Dog “is a highly differentiated restaurant company that has all of the key tenets we look for — fantastic food, a great culture and top-notch leadership.”

Anthony Choe, a partner in Brentwood, noted that the concept has a loyal and highly engaged customer base, saying the “outstanding unit economics give the company an incredible foundation for future growth.”

With the recent investment, Lazy Dog plans to slowly accelerate its slow-but-steady growth pace. The concept plans to open three restaurants next year in California at a growth rate of about 25 percent, said Simms. In the past, the company has opened no more than two in a year.

One of three units to open will be in Concord in Northern California, where a lease has been signed, he said. The other two are still in the letter of intent stage.

Founded initially as “Lazy Dog Café,” the chain changed its name last year with the opening of a 9,000-square-foot flagship location in Brea, Calif., which marked a new evolution for the brand.

Lazy Dog has an average check of about $16, and about 20 percent of sales come from the bar, which features a line up of artisan cocktails, wine and craft beers. Simms declined to share further details about sales.

Simms said there will be no changes in management. His father, Tom Simms, will sit on the company’s board, along with members of Brentwood. Also a partner in Lazy Dog, Tom Simms founded — and later sold — the Mimi’s Café chain.