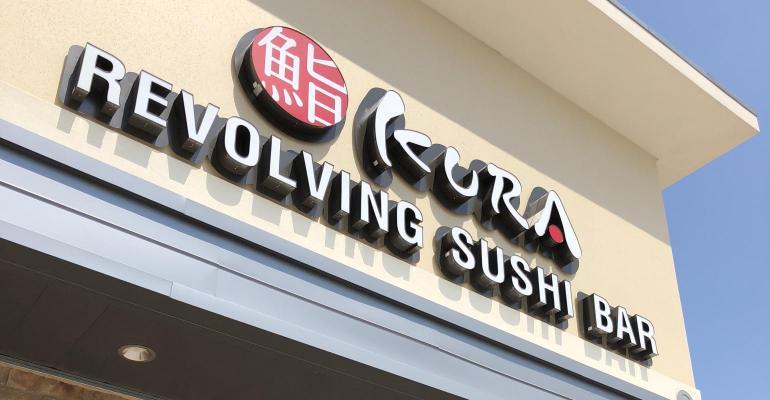 Photo courtesy of Ron Ruggless
Kura Sushi has been able to keep its pricing down compared to mom-and-pop concepts who are less able to absorb inflationary pressures.
Finance

Kura Sushi is starting to realize the benefits of scale

Kura Sushi executives said the company’s size has provided an advantage on pricing in the fragmented segment.

On the heels of its Q1 earnings call, Kura Sushi executives provided a bit more color during the ICR Conference Monday about the company’s continued domestic growth plans and how it has been able to generate traffic in an environment that has been otherwise very difficult to do so. On the quarter, the 42-unit chain generated 6.9% comp sales growth driven in part by 4% traffic growth. That traffic outpaced the casual dining segment by more than 700 basis points, according to Ben Porten, SVP of IR and business development.

“You don’t get that by pricing out your guests or not capturing new guests,” he said. “The pricing we have taken has maintained our value proposition.”

Related: How do you combine automated technology with hospitality? Just ask Kura Sushi

That pricing included about 7% in the first part of December, and CFO Jeff Uttz noted that comps during the same timeframe were more than double that number.

One of the reasons Kura Sushi has found such traction is because it’s a highly differentiated concept – a tech-enabled sushi bar that presents a seemingly endless flow of meal options via conveyor belt. Consumer pent-up demand remains high following nearly two years of Covid-related uncertainties and having an experiential-driven meal can prove advantageous in such an environment.

The chain’s scale in a highly fragmented segment has also proven to be a benefit and will continue to do so as Kura aims to grow to nearly 300 units. Porten said mom-and-pop sushi establishments have not been able to easily absorb inflationary pressures and are therefore “typically priced double as much as us.” Those benefits of scale also extend to the chain’s signature technology. Porten said the chain should be able to achieve its growth objectives because of that technology.

“There are simply not enough executive chefs otherwise,” he said.

Kura’s technology and digital efforts are extending well beyond its conveyor belt, too. The chain is currently automating some back-office tasks that are still done manually, for instance, and plans to add an automated dishwashing system in the coming months. It has also recently introduced robot services, touch panel drink orders and tableside payments. Those additions have increased efficiencies and generated higher guest satisfaction scores, executives noted.

In December, the company began targeting its marketing messages toward first-time guests. Kura is also rolling out a new rewards program systemwide to drive check growth and frequency and is experimenting with new prototypes like a pickup window at its Mall of America location in Minnesota.

However, perhaps the biggest opportunity that will come with added scale is Kura’s ability to use a broadline distributor, which should help reduce costs materially.

“In the past, suppliers we purchased from weren’t interested in us going through a broadliner,” Uttz said. “Now we’re getting bigger, we’ll be able to leverage that more, and say ‘if you want to sell to Kura, you’ll have to go through a broadliner. We haven’t had that opportunity in the past to leverage our purchases. The purchasing team is working on that now and we think it’ll be relatively soon and a good benefit for restaurant margins.”