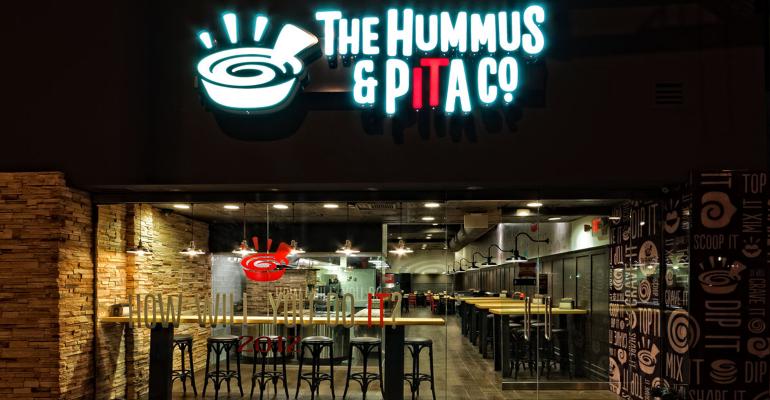 Dan Rowe was riding in an Uber about four years ago when he saw a line out the door at The Hummus & Pita Co., a concept he hadn’t seen before.

The CEO of Fransmart, a franchise consulting firm, stopped the car, got out and stood in the lobby to watch all of the activity. He then made a pitch to David Pesso, whose family founded the chain. Pesso said no, the brand wasn’t ready yet.

“I stalked David for months trying to make a deal, and I couldn’t,” Rowe said. “I was talking national from the moment I saw them.”

Pesso said the brand is ready to take that step now. And now, with four popular locations, The Hummus & Pita Co. doesn’t just have help from Fransmart, but from an investment infusion from Kitchen Fund, an investing fund Rowe helped found, along with Greg Golkin.

Kitchen Fund is investing in the chain by helping it build an infrastructure that will enable The Hummus & Pita Co. to start franchising.

“They bring a lot to the table,” Pesso said. “The capital is a small part of it. They have a wealth of knowledge in fast casual and franchising.”

Janice Axelrod founded The Hummus & Pita Co. in 2011, based on her recipes, and got her family involved, including her sons, David and Steve Pesso. The kids grew up eating hummus and pita.

“That was part of our diet,” in the early ’80s, David Pesso said. “As the years have gone on, we’ve seen it more and more. Hummus went from being on a small Middle East shelf [in the grocery store] to aisles full of 20 different brands of hummus and pita.”

Axelrod had been involved in finance and owned a mortgage bank. She sold it in 2008, and dreamed of opening a restaurant. She put her recipes together and the family launched the restaurant.

“She was in her mid-60s and said, ‘This is my dream, my last hurrah, and I want my family to be involved,’” Pesso said.

The restaurant serves a menu from a mix of Mediterranean dishes — Greek, Turkish, Palestinian, Moroccan — including shawarma, gyros and 12 different flavors of hummus, along with steak and chicken made in a clay oven. The menu also includes vegetarian and vegan options.

The family deliberately gave the concept a basic, Americanized name, with modern décor inside the restaurant.

“We didn’t want it to be something ethnic, or something Greek like Athena,” Pesso said. “The only ethnic part is the authenticity and the food, but it looks and feels like you’re in an American place.” “He loved the food, saw the lines and loved the feel for the place,” Pesso said. “For the past five years, two or three times a year, he would email or call and ask if we wanted to take the next step. But No. 1, we had to have proof of brand first.”

Rowe then approached them and told them about Kitchen Fund.

Rowe and Golkin, a financier who has worked with Goldman Sachs and Maverick Capital, among other places, started Kitchen Fund last year. They’ve made investments in a handful of startup concepts, including The Pie Hole, Mr. Holmes Bakehouse and Inday. They started the fund to make early-stage investments in restaurant concepts.

“There is a shift going on,” Golkin said. “Consumer demands are changing more quickly than maybe they ever have in the food space.”

Many of these concepts are in “a tricky part of the growth curve,” Golkin said, because they are too small to get institutional investor attention, but are too big for friends and family to help.

Kitchen Fund’s goal is to identify concepts connecting with those consumers and to help them grow.

“The Hummus & Pita Co. is really the perfect thesis for us,” Golkin said. “Over the last few years, they’ve opened four successful units in New York as a family business. Now they have the operations, infrastructure and menu, all in a way that prepares them for really rapid growth at this point.”

The Hummus & Pita Co. has completed its franchise registration documents, and is working with Fransmart to lure operators to the concept. Rowe said there are franchisees already interested in the brand.

“His store opened with a line out the door,” Rowe said. “We would have invested in the brand when he had one. Now they have the luxury of having four, in different parts of Manhattan, and are able to see years worth of historic financials.”