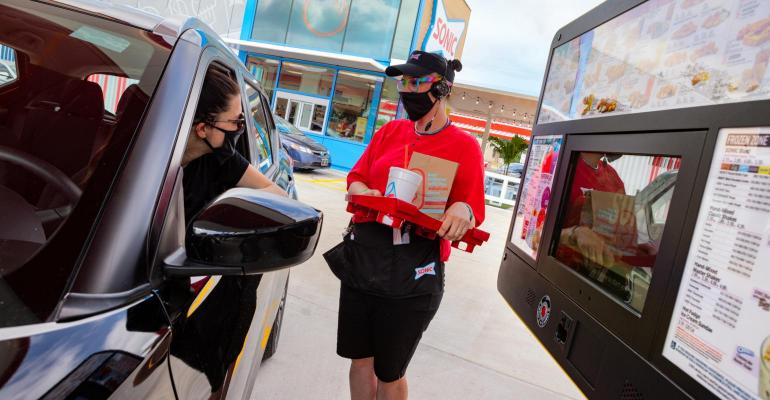 Which of Inspire Brands’ concepts had highest SSS growth?
Finance

The multiconcept Inspire Brands posted double-digit same-store sales growth over the past two years for five of six brands. Only Buffalo Wild Wings had two-year comps in the single digits, the company said Thursday in a financial update.

Though the Atlanta-based portfolio company is private, Inspire Brands said it achieved record performance results in 2021, despite the challenging landscape. The company posted two-year same-store sales growth for each brand (except Rusty Taco), with Sonic Drive-In leading the pack with a 25.8% increase, and Baskin-Robbins up 13.6%.

Buffalo Wild Wings’ same-store sales were up 1.2% for the two-year period.

Looking at the one-year same-store sales growth comparing 2021 with the prior year, when many restaurants were closed for dine-in by pandemic-related restrictions, Buffalo Wild Wings was the leader with a 22.8% increase, followed by Jimmy John’s up 21.3% and Dunkin’ up 15.5%.

Rusty Taco, the smallest chain in the Inspire Brands family with about 40 units, has plans for national growth. Earlier this year, Rusty Taco president Brendan Mauri said the company hopes to get to the point where they are opening 40-50 units per year.

Inspire Brands in 2021 exceeded $30 billion in global sales, growing the various brands to nearly 32,000 restaurants in 70 markets with the help of more than 3,400 franchisees. During the year, the company completed the acquisition of Dunkin’ and Baskin-Robbins, and saw the opening of 1,400 restaurants, including more than 500 franchise-led units in the U.S.

During 2021, digital sales grew more than 35% year-over-year to $6 billion, or 20% of U.S. system sales, the company said. The company surpassed $1 billion in sales through third-party delivery marketplaces.

The portfolio company took a number of steps last year to up its off-premise game. Last year, Jimmy John’s opened its first drive-thru-only site. Dunkin’ opened its first digital-only unit. And the company announced plans to open another 100 of the Buffalo Wild Wings GO concept by the end of this year.

Inspire Brands was born in 2018 with the $2.9 billion acquisition of Buffalo Wild Wings by Arby’s Restaurant Group. Under the new name Inspire Brands, went on to acquire Sonic, Jimmy John’s, and Dunkin/Baskin-Robbins.