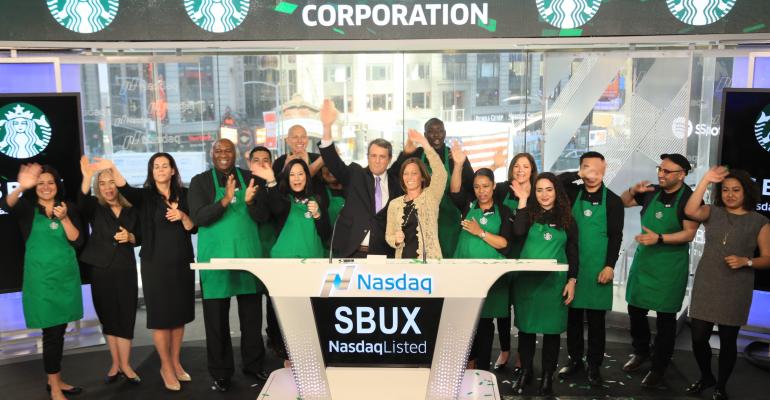 How Starbucks changed the restaurant industry

Blog: In 25 years since its IPO, the coffeee company has made a lot of people wealthy

Twenty-five years ago today, a little known coffee shop chain out of Seattle, Starbucks Corp., filed for an initial-public offering. At the time, Starbucks had just 165 locations.

The chain would use that IPO as a springboard to an incredible run as one of the most successful and consequential restaurant chains in the country.

Over that time, Starbucks has become one of the most successful publicly traded restaurant chains in the country.

Today, Starbucks is the second largest restaurant chain in the country, with $17.9 billion in system sales, and it is the third largest in terms of unit count, 13,172 as of the end of December.

Some time in the next two years it will surpass the number of domestic locations at No. 2 chain by unit count, McDonald’s Corp. with its 14,155 locations as of year end 2016. Worldwide, Starbucks has 26,161 locations as of the end of the first quarter — or more than 10,000 fewer than McDonald’s, meaning it has a ways to go to overtake the company globally.

Still, if you’d invested in Starbucks at its IPO 25 years ago, you would have an awful lot of money today.

A $1,000 investment in Starbucks on the day of its IPO today would be worth $221,519, accounting for six stock splits — but not counting the dividends Starbucks has paid over that time.

Starbucks is arguably the most successful restaurant stock over that period, a major, long-term industry play. Starbucks’ market cap has grown from $250 million shortly after the IPO to $86 billion today.

People knew it was something special pretty quick. Some people noted that they would have “never” invested in a coffee chain in the early 1990s. But plenty of people did. The company had an explosive first couple of years on Wall Street. Starbucks had its first stock split just one year after its IPO. By 1995, the company’s market had increased 1,100 percent, according to Business Insider.

It’s difficult, however, to overstate Starbucks’ impact on the restaurant business — beyond proving that consumers will pay $2 for a cup of coffee just about every day, and a lot more for the chain’s flavored drinks.

Indeed, it’s pioneered the industry’s big move toward beverages. Restaurants are increasingly competing for the customer who likes to walk around with a giant drink in their hand. Beverages are a far more frequent occasion and usually generate higher profit margins.

Starbucks has also shown that companies don’t have to push customers out the door — giving them soft seats, great ambiance and free Internet access to keep them there where they could theoretically buy more coffee.

Perhaps most importantly, Starbucks has helped drag the restaurant industry into the 21st century. The company has demonstrated the potential of electronic payments — 44 percent of its transactions in the second quarter came through gift cards or its loyalty program.

The gift cards and the company’s mobile order and pay capabilities — which represents 20 percent or more of all transactions at 1,800 of the chain’s locations — have shown that consumers prefer ease of use. Of course, the company also proved that doing too much business through these channels could turn some customers off. And fixing that will be important to the chain’s sales in the near future.

Still, for Starbucks, it’s been quite the 25-year run, one that has helped changed the industry.