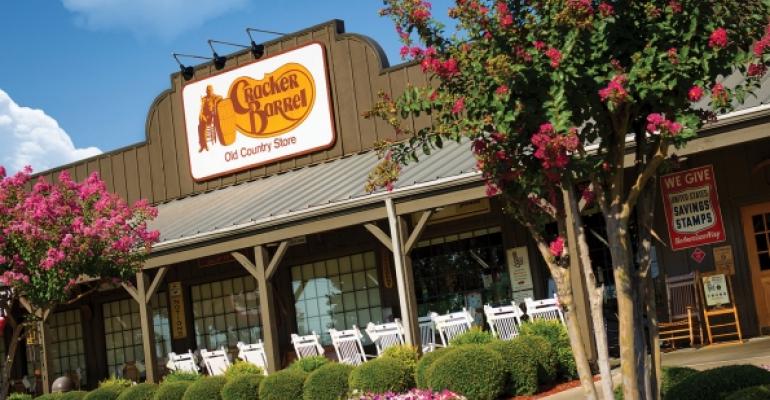 The Lebanon, Tenn.-based family-dining and retail operator forecast a same-store sales increase in the range of 1 percent to 2 percent. The forecast “reflects our current belief that the consumer environment will continue to be challenging through the holiday season,” said Jill Golder, Cracker Barrel chief financial officer, in a fourth-quarter earnings call.

“As we believe the gap between food at home and food away from home prices has continue to widened, and that the consumer will still look for value propositions in fiscal 2017, we have planned a deceleration in menu price increases from our previous two-year run rate, and anticipate our fiscal 2017 menu pricing to be in the range of 1 percent to 2 percent,” she said.

Cracker Barrel also anticipated deflation in commodities in the range of 2 percent to 3 percent in the year underway, Golder said.

The company will continue to open new locations, despite the economic headwinds, she added, with seven or eight new Cracker Barrel units and four or five Holler & Dash Biscuit House locations in fiscal 2017.

Cracker Barrel opened the first Holler & Dash restaurant in March, in Homewood, Ala., and the second location in July, in Tuscaloosa, Ala.

“That opening plan is more driven by us trying to open enough to get the learnings and to understand the long-term potential of the brand before we've opened more than we wish we had,” Cochran added.

The openings of the biscuit-house concept are spread out, with one scheduled in the next 60 days, another in 90 days, and the remainder by the end of the fiscal year, she said.