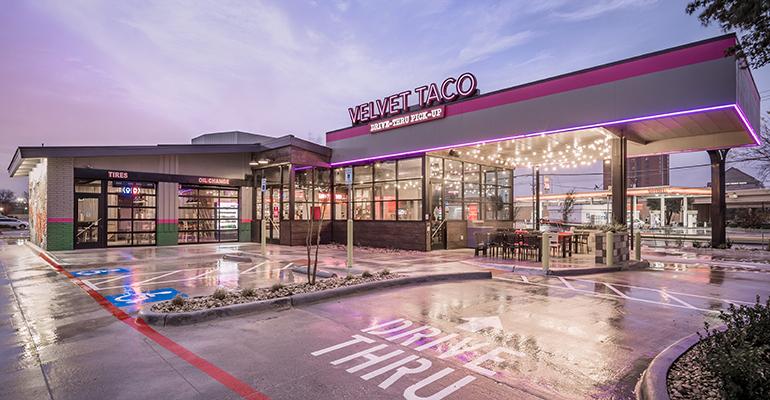 Velvet Taco is planning to more than double in size over the next few years.
News>Fast Casual

Velvet Taco had never opened more than four units in one year. With 17 units heading into 2021, the chain was growing but slowly and sustainably. Then  the chain opened four units in the first quarter.

“We accelerated, put the pedal to the metal, and this year we started with 17 restaurants, and we’ll end the year opening up 13,” said Velvet Taco CEO Clay Dover.

That’s all part of the new aggressive expansion plan for the 10-year-old brand. With 11 sites already in the works for 2022, Velvet Taco expects to close next year with more than 40 units..

This follows an impressive 2020 for Velvet Taco, during which some brand locations have crossed $100,00 in opening week sales.

Tacos were virtually made for the pandemic since they are so portable, and this advantage helped the company get through one of the toughest years for the industry in history.

Velvet Taco was able to move fast to capitalize on the changing food patterns of Americans during the pandemic.

The Dallas-based fast-casual brand is known for its global taco menu, satisfying every cultural food need for the family in one order.

Dover said the most popular menu item is the Spicy Chicken Tikka Taco. That taco is based on the popular Indian sauce Tikka Masala.

“We really provide a very culinary forward experience and so you can have any type of cuisine, on a taco. We like to say, ‘tacos without borders,’” said Dover.

Other global flavors have been tried in the chain’s weekly taco features, more commonly referred to by the brand as WTF, and have included dishes like the chicken parmesan taco with breaded chicken, red sauce and melted parmesan in the Italian-style.

If all the menu decisions were up to Dover, that item would be permanent on the menu.

The chain uses these weekly taco features to test out trendy ingredients, such as caviar and even crickets, which went on a limited week-long run as one of the WTFs.

“We’re able to create tacos with our chefs, put them on the menu and have them available within a few weeks,” said Dover, rather than the months or years it could take a big chain competitor to add a new flavor to the menu.

Not every taco they try works out, and that’s okay with Dover.

“We’ve done Siracha cricket tacos, and while they didn't sell, people talked about it. During Mardi Gras, we did a gator taco, and just the fact that you're able to come in, get a gator taco, then you can go back to the office and say, ‘I had alligator for lunch today,’” said Dover. “It’s just a lot of fun.”

These moments are how Velvet Taco is marketing itself: word of mouth. There aren’t big campaigns for the chain, just good old-fashioned person-to-person marketing in local neighborhoods.

Part of that is hiring 50-60 workers in each new community the chain enters, who eventually spread the gospel of Velvet Taco.

As for standing out in the crowded Texas taco market, Dover isn’t worried.

The chain’s operators are so confident in the brand that they came up with the chain’s mantra, “Kick ass and take names,” — not corporate.