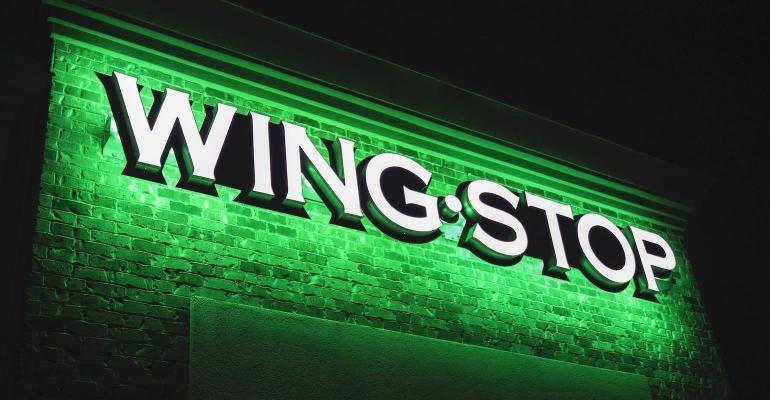 Wingstop Inc. continued to benefit from slipping wholesale costs for bone-in chicken wings during its third quarter, allowing it to hold the line on menu price increases and increase transactions with a new chicken sandwich and expanded delivery platforms, executives said Wednesday.

“We expanded our delivery channel, advanced menu innovation with the launch of our chicken sandwich, and we continue to drive brand awareness with an elevated level of national advertising spend,” Skipworth said.

The brand in July expanded to the Uber Eats marketplace after a longtime exclusive DoorDash third-party delivery partnership. In late August, Wingstop began offering a chicken sandwich after testing it in 60 restaurants in four markets. The digital channels reached 62% of Wingstop sales in the quarter.

While many restaurant competitors have been forced to raise prices to cover increased commodity costs, Wingstop was able to hold the line – partly with the popularity of the new chicken sandwich, which was mixing in the high single digits, executives said.

“That is over two times what we saw in our market test,” Skipworth said, “and at these mix levels chicken sandwiches are proving that can drive more Wingstop occasions and play a role in building brand awareness.”

In addition, the sandwich helps the brand increase its boneless mix.

“We also see chicken sandwiches away for us to further our boneless mix in our restaurants,” Skipworth noted, “and could see a path to boneless mix exceeding 50% of our total mix, which will play a key role in advancing our supply-chain strategy.

“With the higher boneless mix, we can see a future with food costs in the low-30% range,” he said, which would contribute to higher profit margins. For comparison, Alex Kaleida, Wingstop’s chief financial officer, estimated food costs at company-owned restaurants to be 35.5% in the fourth quarter.

Skipworth said the brand has seen “meaningful deflation” in wing prices, which puts the brand in what he called a “unique spot.”

“We haven't had to take price this year,” he said, “and you know a lot of other brands have, and they've had to take a lot of price to navigate this record inflation.”

He said he expects pricing to revert to historical trends in 2023, which for Wingstop traditionally has been one or two percentage points of price each year.

“With our elevated ad spend,” he said, “we were able to promote chicken sandwich on a new delivery platform.”

In the third quarter, Wingstop opened 40 net new restaurants, bring the total for the first nine months of the year to 167, the company said. That’s a growth rate of about 13.5%.

Wingstop has seen fewer roadblocks to growth than some competitors, Skipworth said.

Construction for many other brands, he noted, “could involve a scrape and build out on the pad. It could involve a much more involved build. Our asset is in-line. It's a shell that we're building out and it's extremely efficient.

“I think that's what allows us to enjoy really low initial investment – on average $400,000 – and deliver those great returns on that efficient box,” Skipworth said. “We have been extremely proactive in engaging with our equipment suppliers, just ensuring that the equipment is there to support our pipeline.” He cited securing fryers for anticipated openings as an example.