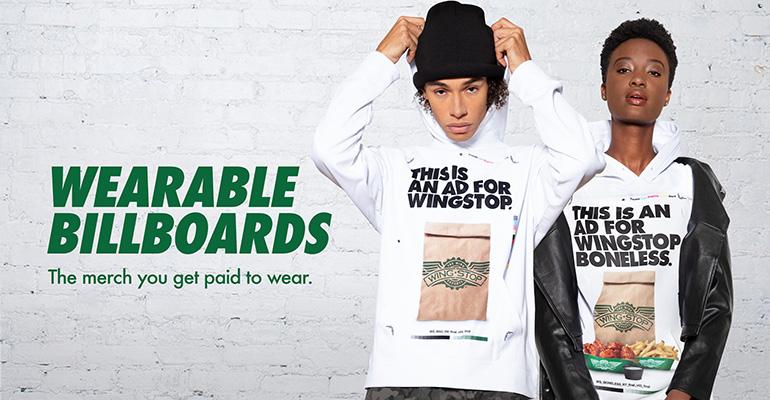 Fast-casual chicken chain Wingstop is inviting fans to become walking billboards, offering to pay them to show off a free branded sweatshirt on Instagram as part of its “Wearable Billboard” campaign.

By tapping into the power social media, something large brands have flocked to in recent years for discounted, youth-facing advertising, Wingstop is looking to spread its message faster and farther than a single billboard could ever do.

Three white hooded sweatshirts — with phrases like “This is an ad for Wingstop” in bold type — were made available to fans Monday afternoon at no cost through the website wingstopwearablebillboards.com. The items sold out within a matter of hours.

Each sweatshirt displays the press proof of what would typically have been a billboard ad for the company. Press proofs are the final proof submitted to the printer that shows general appearance, margins and color typically for an advertisement or print placement, a move the company says winks at the very concept of online influencer marketing. 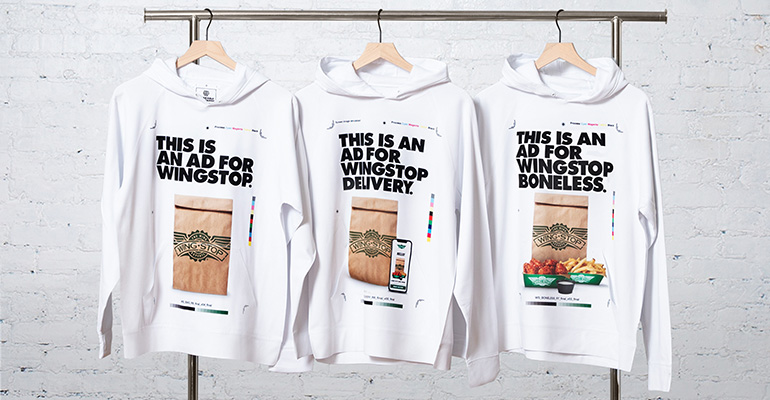 All three sweatshirts from Wingstop are now out of stock.

Once fans receive the free sweatshirt, they can receive payment for posting on Instagram. Posing in the sweatshirt and tagging @Wingstop while using the hashtag #ThisIsAnAdForWingstop, nets the fan $10 on the payment app Venmo, transferred from Wingstop.

It’s the first time the Dallas-based company has used the social media platform in a direct campaign to incorporate fans and try to get a new hashtag to trend.

However, as this alternative form of marketing gains popularity, brands need to be aware of rules and regulations.

Instagram is owned by Facebook but does not follow the same advertising rules as its parent brand; the rules are a bit more lenient on the younger platform.

Still, the Federal Trade Commission (FCC) has begun to monitor sponsored content on Instagram. In 2019, The FCC sent a letter to 21 Instagram influencers warning against publishing content for which they receive money without making it explicitly clear it was sponsored.

A brochure of disclosures was published by the FCC in 2019, making it impossible for brands to send merchandise to app-users without the users own disclosure.

Because Wingstop is offering to pay whoever posts about them, the hashtag is necessary for any user who does not want to run into the law.

Wingstop is not the only restaurant brand experimenting with this form of advertising.

Recently, Moe’s Cantina used Instagram influencers for its own campaign introducing queso at the restaurant chain.

@moessouthwestgrill queso is BETTER than Chipotle’s and I’ll prove it. Use code “BestQueso” in the Moe’s app for a free side of queso today. Oh and #ad

This post is also self-referential and “ironic” as the man in the photo is holding a sign that says “Stop Doing Sponsored Ads” while the caption instructs followers to order Moe’s new queso on the Moe’s app, finishing off with #ad.

@DudeWithSign is an account that routinely uses comedy to point out the thoughts a general consensus of people are having on the internet and has recently begun to partner with celebrities and sponsored content. The account is verified and has over 5.7 million followers.

While Wingstop is using the power of its fan base and rewarding participants on a small scale, Moe’s picked a larger target hoping that a bigger investment (influencers can receive between $500 and $5,000 for a sponsored post) would pay off.